It's Time To Flaunt Flowers ... On Yet Another Mid-Autumn Friday.

The dry sunny mid-Autumn weather continues here.  The days are still quite hot, but at least the humidity is far less and it's not as sticky out there in the middle of the day.  My place is still rather green, as our 'dry' season has only really just begun. 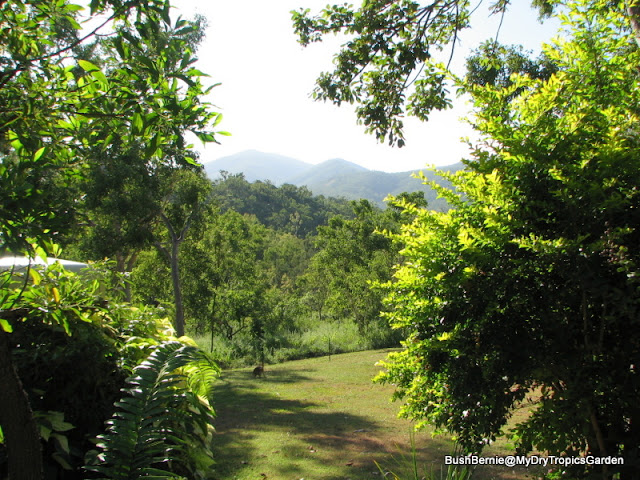 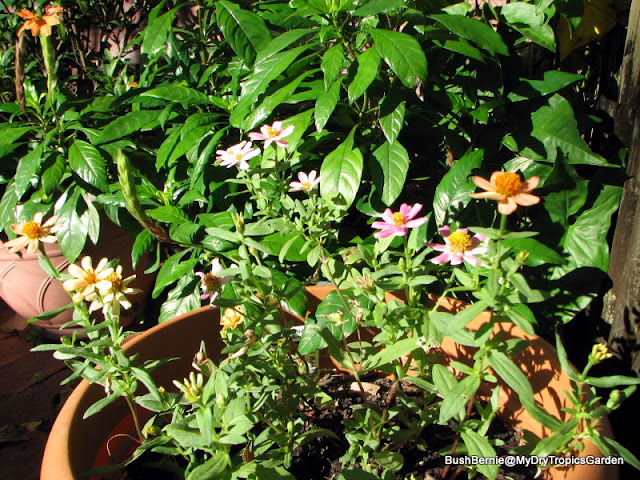 My pot of Zinnias is out in the courtyard, but not looking great.  They are dwarf Zinnias, but they're being munched on by something and they're still looking a little anorexic to me. 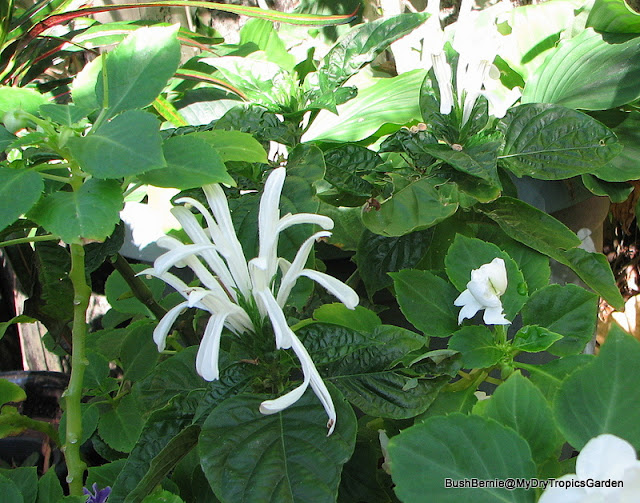 I'm seeing new plumes on my Justicia canrea 'Alba' and there are gorgeous little blooms appearing on the white Impatiens I added to the pot.  I do so love white in the garden! 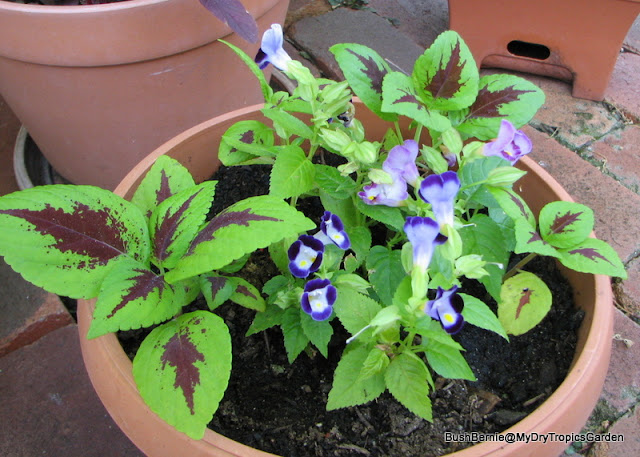 After the long 'wet' season we had over our Summer and into early Autumn, I found lots of little volunteer Coleus and Torenias popping up in between the pavers out in the courtyard.  I managed to save some before the whipper-snipping weed control effort of hubbie, and potted them up.  They're looking very happy after the move. 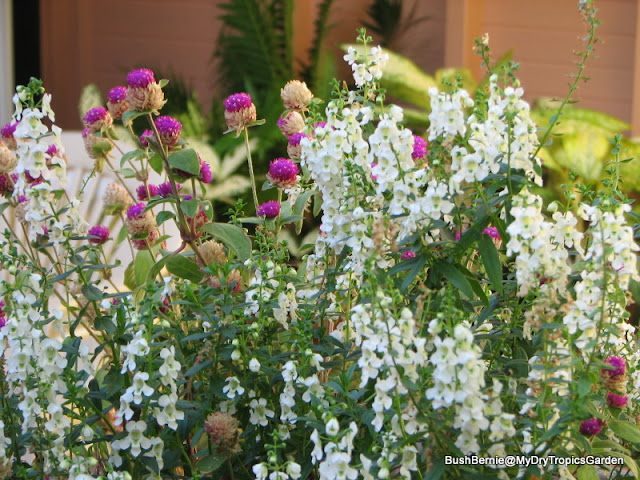 The white Angelonias are still powering on, although the Gomphrena globosa 'Buddy Purple' have almost come to the end of their flowering time.  They usually self-seed in the pot though and come back again later in the year.

Now I know this in not the best shot I've ever taken, but the batteries died in my camera so there was no chance of taking another shot for this post. 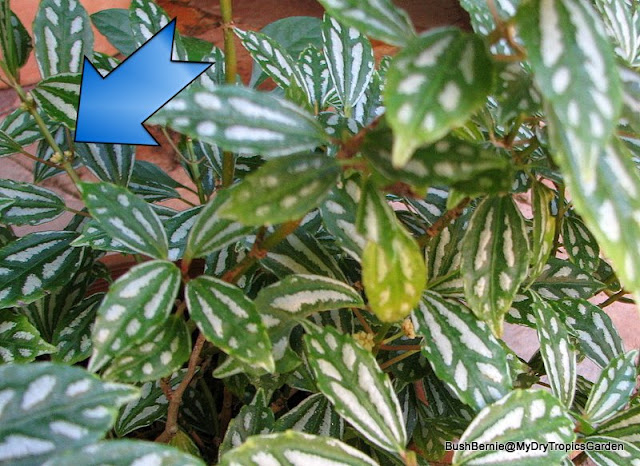 Anyway, it seems that my Pilea cadierei, or Aluminium Plant, is blooming for the first time. It may be hard to spot, but that blue arrow points to the beginnings of the small cream flowers that appear at the stem tips. Maybe it's not the first time this plant has flowered, as I never really take much notice of this poor little no-fuss plant.  It's not really at the top of my plant care list, as it just sits out in the courtyard in the background never really demanding attention. 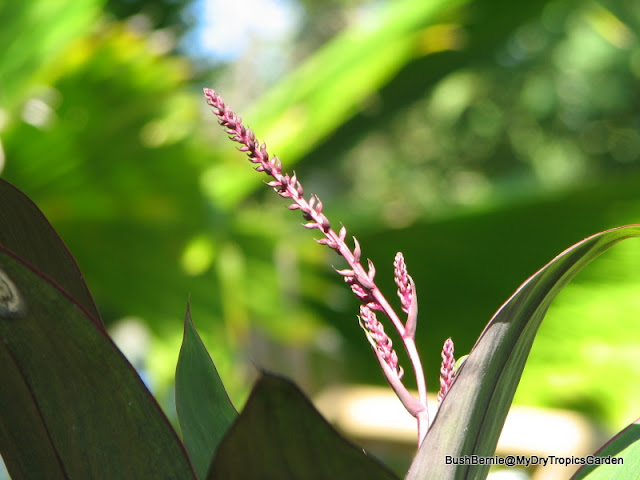 Another bloom I noticed this morning ... is the flower spike on my Cordyline 'Black Night'.  I can't wait for it to open up.

Elsewhere around my place ... 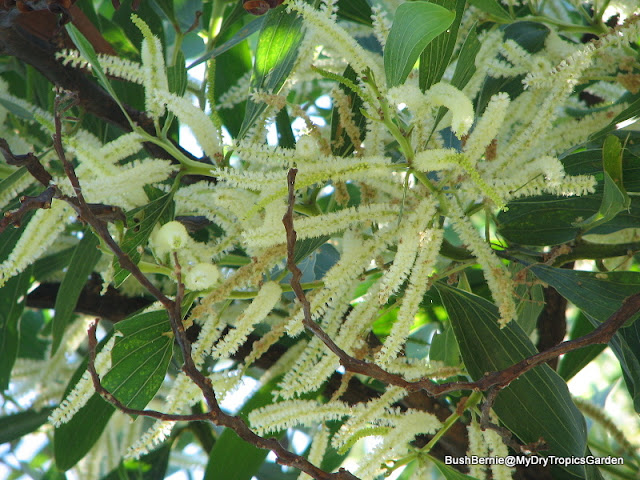 the fuzzy lemon caterpillar-like flowers of my Acacia are on show once more, 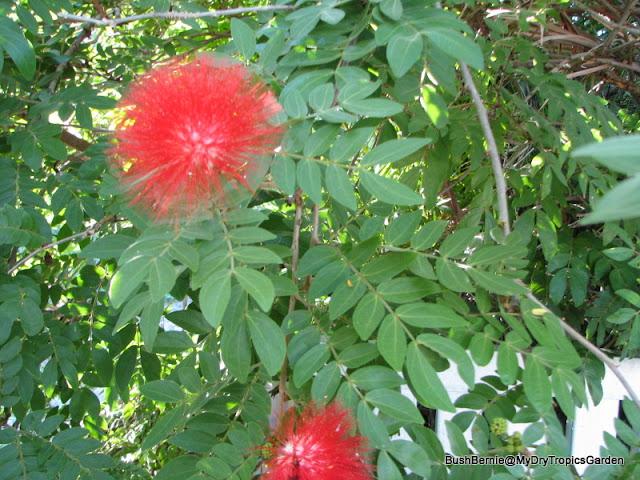 the first powder puff blooms of my Calliandra are here, 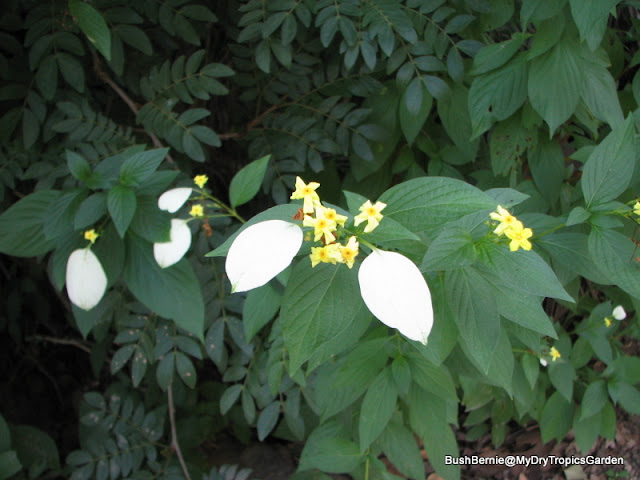 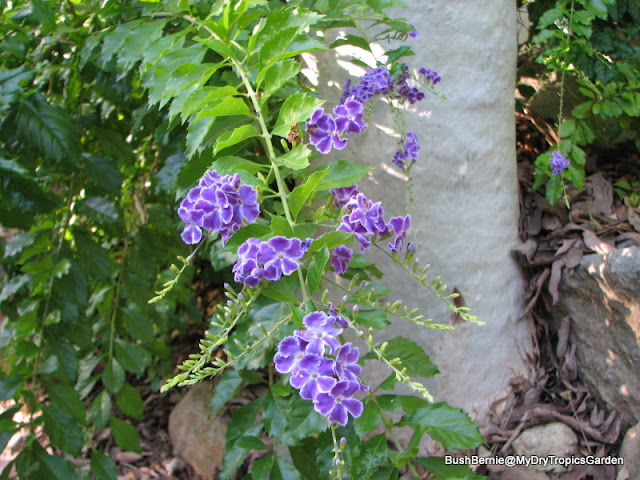 and the largest of the Duranta repens shrubs down the driveway is now back to its normal scheduled blooming cycle. 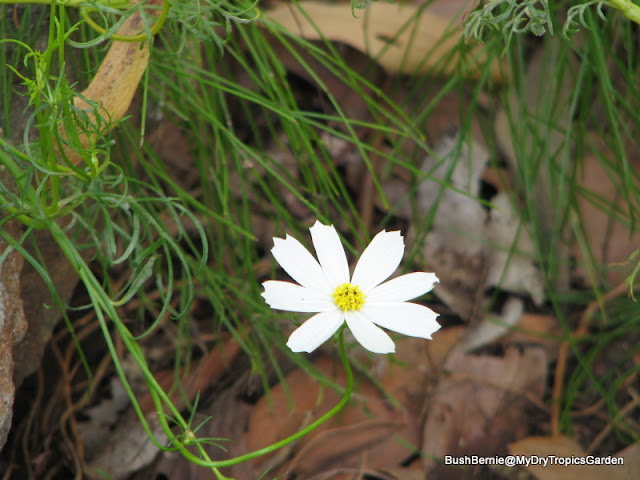 One of the disappointments recently was the battering my lovely Cosmos 'Purity' took during the couple of weeks of high winds we had at the end of March/beginning of April.  The Cosmos was only planted out in the tiered garden beds a few weeks ago, and the stems are now bent and broken and lying on the ground.  There are still flowers appearing on the broken stems however, and I haven't had the heart to cut the plant back just yet.  I'm enjoying the blooms even though the plant looks in bad shape.