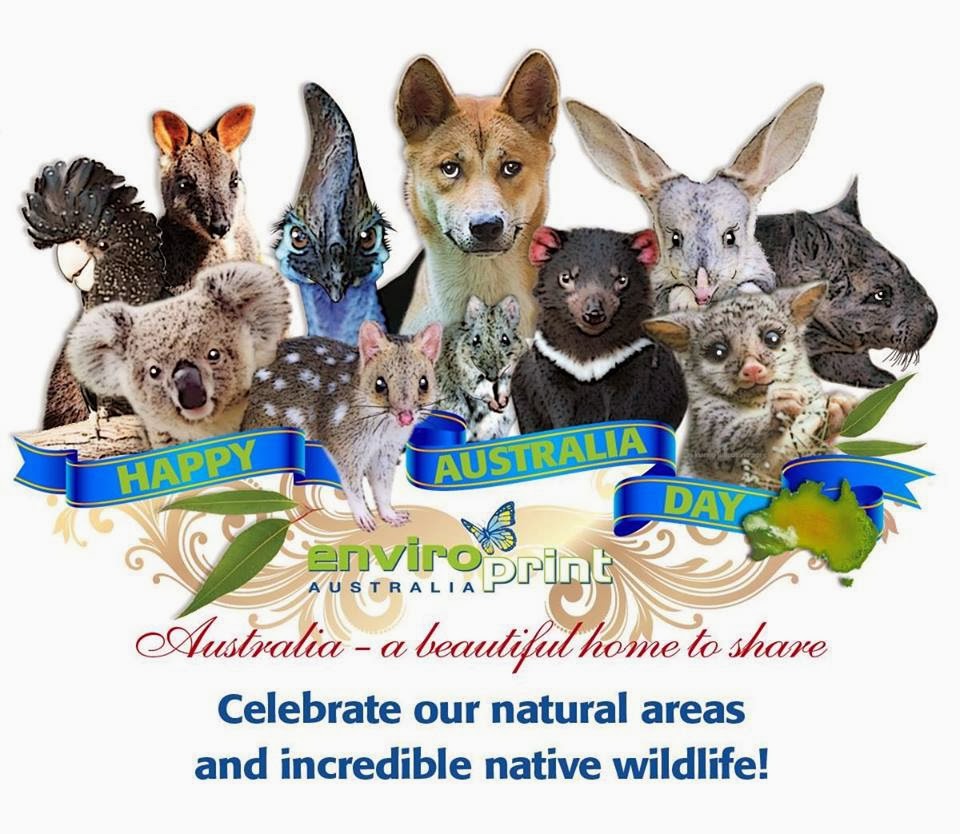 Have you got a few moments to spare?  Because I'm about to go on and on and on about my great homeland.  You should grab a cuppa and make yourself comfy!

Yes today, January 26th, is our Australia Day.  It's a time when we stop to appreciate just exactly what it means to be an Aussie and to appreciate just how privileged we are to live in this great country.  This place is unique, and I think we sometimes fail to really appreciate all that.  Today is the perfect day to stop, remember, and celebrate.

I'm the first to admit it may not be paradise for all.  We do have our failings, and there is still room for change.  In spite of all this though, I truly believe we live in a place that's pretty darn close to paradise, and I'm so very proud to be able to call myself an Aussie.  There's a lot that's fantastic about this country.

What makes it such a fantastic place ... hmmm, let's see!

It's the the lifestyle, the unique scenery, the fauna, the natural wonders, the sport, the vibrant, changing culture ... but most of all, I think, it's the people.

I think Aussies are rather unique, and what I love most about Australians is their laconic sense of humour, and their larrikin sense of fun.  In the spirit of that unusual sense of humour, I just had to share this list.


You know you’re Australian when…

2. You know all the words for Khe Sanh, Shuddupa Your Face, or Gangajang’s ‘This is Australia’!   Then there’s The Angels' classic ‘Am I ever Gonna See Your Face Again’, many AC/DC tunes, the odd Rose Tattoo number and the happy-pop wonders of the HooDoo Gurus! .

3. You know that snow is a memorable and freakish occurrence. Sometimes it’s even fake, especially at Christmas time.

4. You know the difference between thongs and a G-string.

5. You know that “stubbies” are either short shorts or small beer bottles.  You know a  “bogan” is a person who's not 'with it', a “hoon” is an idiot who likes fast cars, someone in trouble is in “strife” and you’re liable to burst out laughing whenever you hear of Americans “rooting” for something.

5. You know that some people pronounce Australia like “Strayla” and that’s ok.

6. You know that there is a universal place called “Woop Woop” located in the middle of nowhere… no matter where you actually are.

7. You know that while we call our friends ‘mates’, we don’t use terms like ‘bewdy’ and ‘shrimp on the barbie’, contrary to popular belief.

8. You also know that kangaroos don’t live in most Aussie's backyards, but we will happily pretend they do just to feel superior to people from foreign countries who think they do.

12. You know that Sydney 2000 was one of our proudest moments in history. We rocked!

14. You know you’re Aussie when the month comes after the day when writing the date.

15. We know that the metric system will always be better than anything inches, feet, pounds.

16. You drive on the left-hand side of the road.

17. If you’re a pedestrian and cars are stopped at a red light, you will fearlessly cross the street in front of them, and know you're safe. ‘Hit and runs’ just aren’t cricket.

18. You know that New Zealanders are basically our naive country cousins, who have a weird fush-and-chups accent and, for some bizarre reason, think that they invented pavlova. They are to be pitied. They have no hope of gaining the upper hand in the endless sporting rivalry between our two nations.

19. You know that you can’t eat Fantales alone… Otherwise who will you play the ‘Who am I…’ game with when you’re reading the wrapper?

20. You know that Sydney should be the capital, because Canberra is a hole.

21. You know that Americans think we’re all Steve Irwin clones. And crikey, they couldn’t be more wrong.

22. You know that lawyers wear wigs and gowns. And we make it look good.

23. You have, at some point in your life, slept with Aeroguard on in the summer. Maybe even as perfume.

24. You feel obliged to spread salty black stuff that looks like congealed motor oil on bread… and actually grow to like it. You’ve also squeeze Vegemite through Vita Wheats to make little Vegemite worms.

25. You believe that democracy means the freedom to draw caricatures of good ol’ Tony Abbott and crew.

26. You have the ability to compress several words into one – ie ‘g’day’ and ‘d’reckn?’. This allows more space for profanities.

27. You’ve ever used the words – tops, ripper, sick, mad, rad, sweet – to mean good. And then you place ‘bloody’ in front of it when you REALLY mean it.

28. You know that the barbeque is a political arena; the person holding the tongs is always the boss and usually a man. He turns the steak ... and the women do everything else.

29. You say ‘no worries’ quite often, whether you realise it or not.

30. You know what fairy bread tastes like, and you can’t imagine your childhood without it.

31. You know the first verse to the national anthem, but still not exactly sure what “girt” means. And you’re ok with that.

32. You’ve drank your tea/coffee/milo through a Tim Tam.

33. You know that backyard cricket is a nice way to bond with family and the rubbish bin. And the ‘one bounce, one hand’ rule always applies.

34. You know that we are home to the just about all of the world’s deadliest of animals. That’s why if anybody messes with us we’ll get some funnel webs on their arses.  (Oh yeah, you know that an ass is a donkey and a backside is an arse!)

35. You see people walking bare-foot on the footpath and don’t scorn…. because you’re doing it too.  (Note: You don’t use a sidewalk, because it’s called a footpath.)

36. You know that in summer a seat belt buckle becomes a pretty good branding iron.

36. You know what Trop-Fest is, and it makes you happy.

38. You firmly believe that in the end, everything will be okay and have offered advice that included the words, “she’ll be right, mate”.

39. You have a story that somehow involves an excessive consumption of booze… but you can’t remember all the details.

40. If you're a bloke, you own a Bond’s chesty, in several different colours.  If you're a bird, you probably have a tank top stashed somewhere in a drawer.

41. You’ve ordered a steak the size as your head and only paid $5 at your local RSL.

43. You know how to slip, slop, slap like it’s nobody’s business.

44. You’ve heard the Prime Minister dismiss anyone who disagrees with him simply as ‘un-Australian’, and that’s enough to make us sit down and shut up.

45. You know that the value of a public holiday is measured in terms of alcohol. God bless the Queen and her 4-day birthday.

46. You refer to someone you like as “an old bastard”, but call someone you don’t like “a bit of a bastard”.

47. You know there’s no LBW in backyard cricket, and over the fence is out.

49. You know you that roo meat tastes pretty good, but not as good as barra, or a meat pie.

50.You know Australia IS the best bloody place on earth. Bar none.


If you still want a bit of a laugh, here's a few more:

33 Ways You Know You're Australian 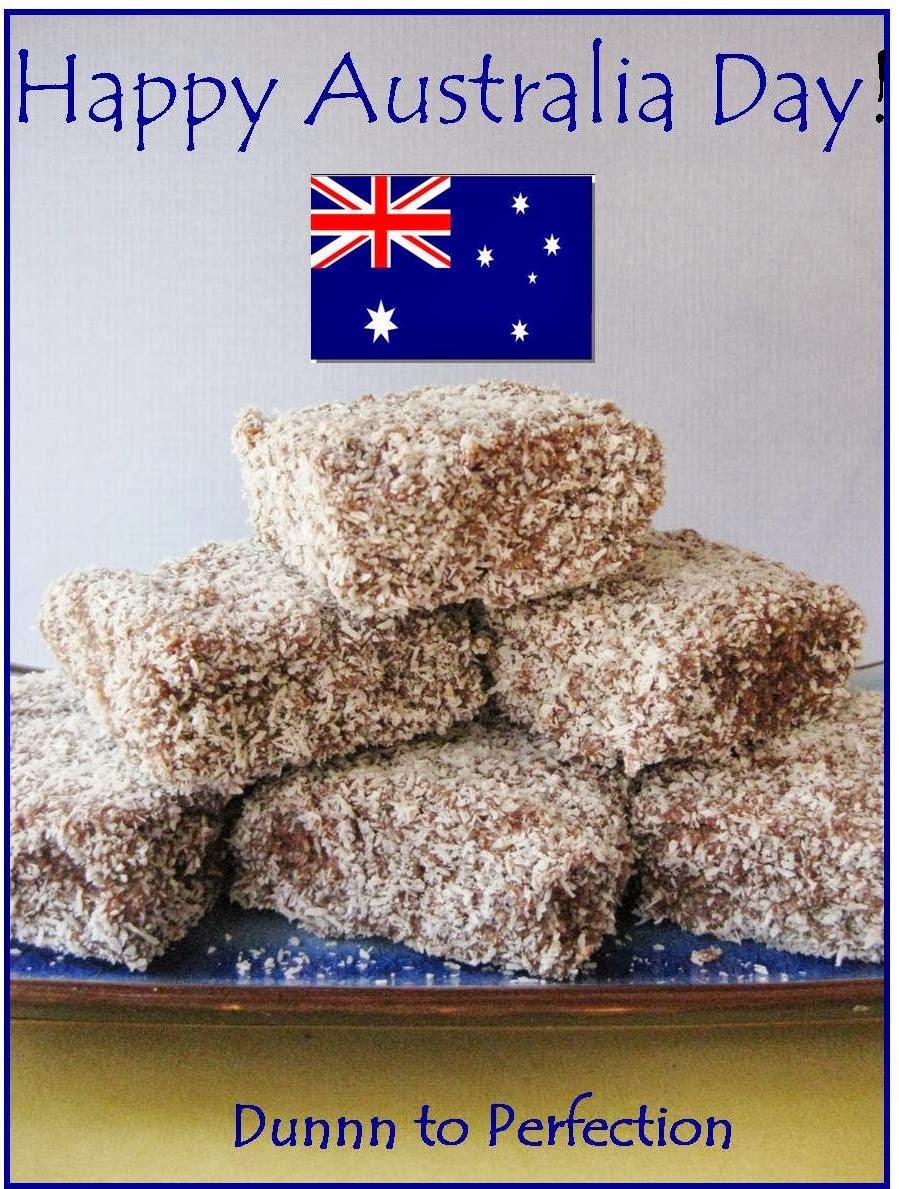 I also just had to include two links to a list of some well-known Aussie standards ... old and new. 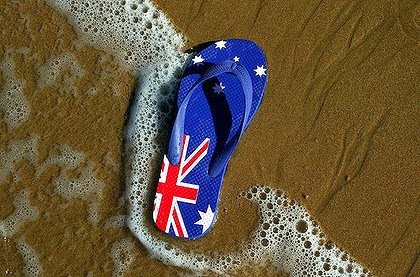