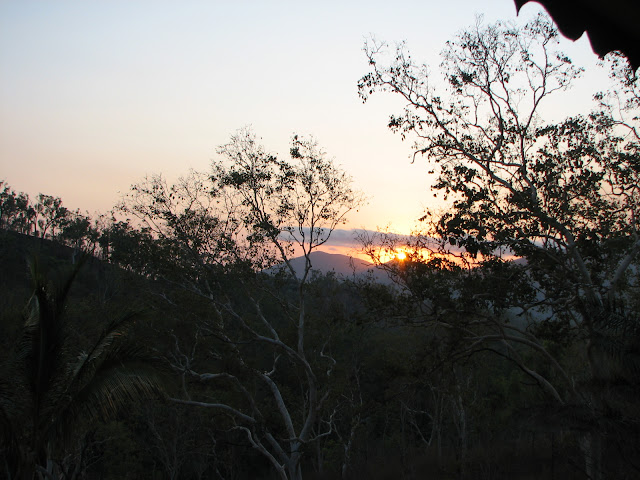 Yet another Flower Flaunt/Skywatch Friday has begun.  We've had some strange weather lately.  It's been very gusty and windy with grey clouds hanging around heavy with the promise of decent rain.  That hasn't eventuated in my suburb, but apparently there has been heavy showers in other areas around our city area.  Here, we've had some very very light drizzle which barely touches the ground.  The garden, however, seems to be a bit more cheerful and happy.

In my mid-Spring garden the Hemerocallis have begun their show for the year. 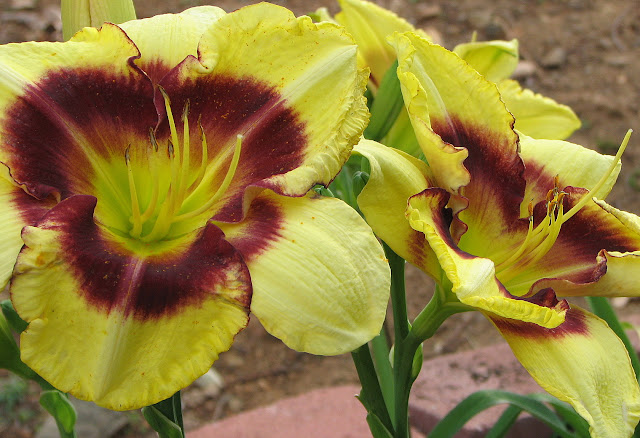 At the beginning of the parade of colours was Hemerocallis 'Blackberry Jack', with a whole lot more yellow in his attire than he is supposed to have.  He was out front all by his lonesome for a week or so before being joined by 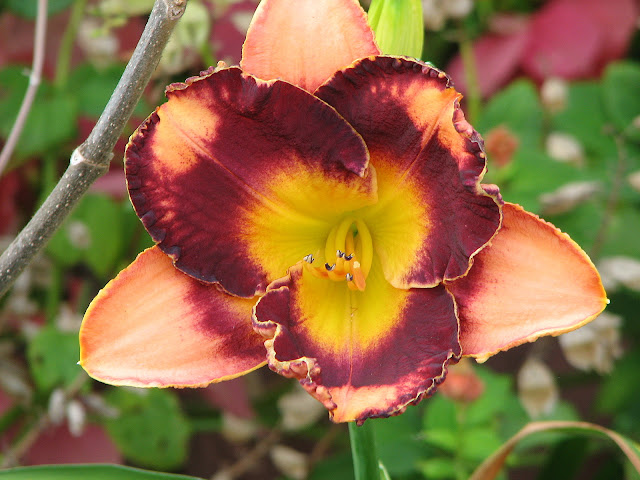 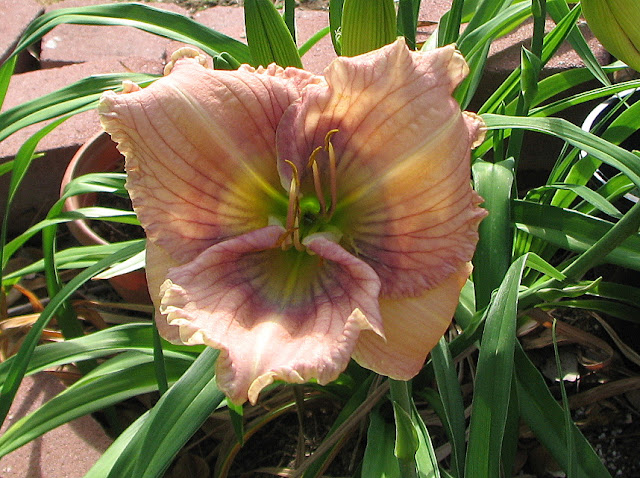 It didn't take long before Hemerocallis 'Archangel Eyes' joined in.  There's quite a few Hemerocallis waiting in the wings to join the parade, but they haven't appeared just yet. 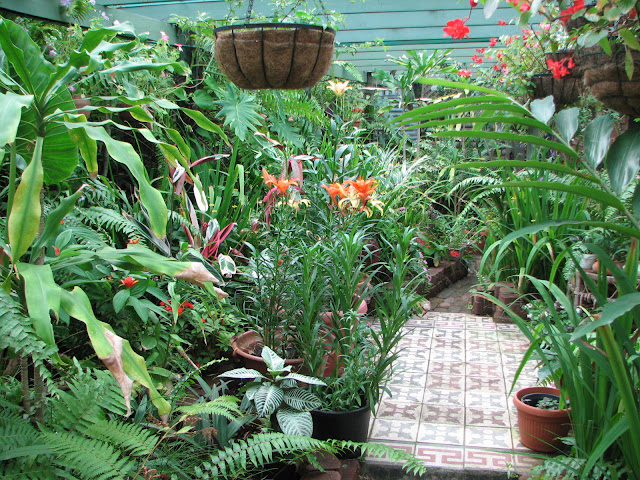 There's been some lovely colour out in the Shadehouse Garden. 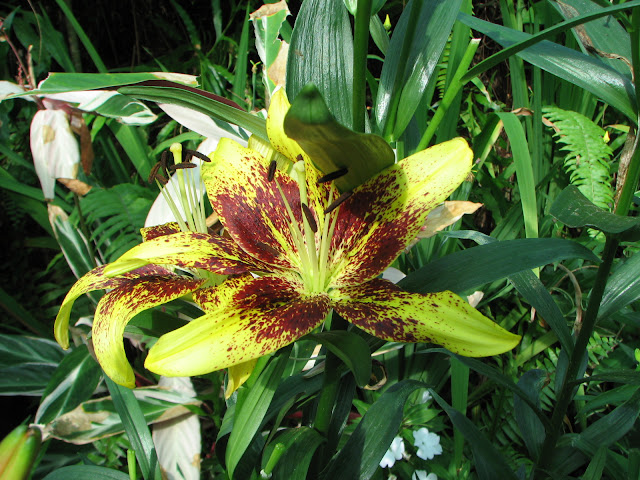 The Asiatic Lilies have been on show, 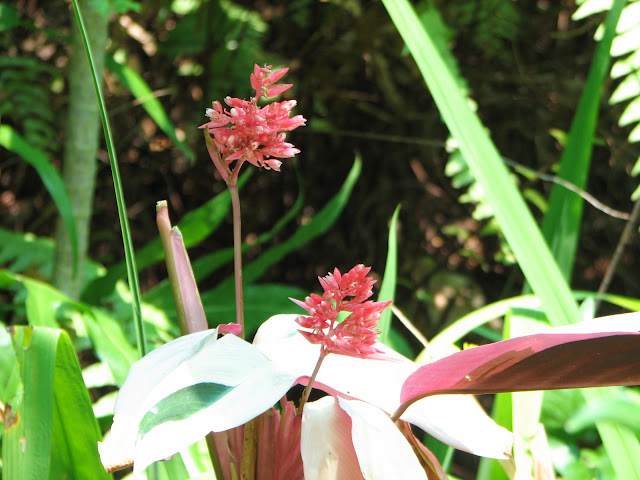 as have the Stromanthe sanguinea 'Tricolor', 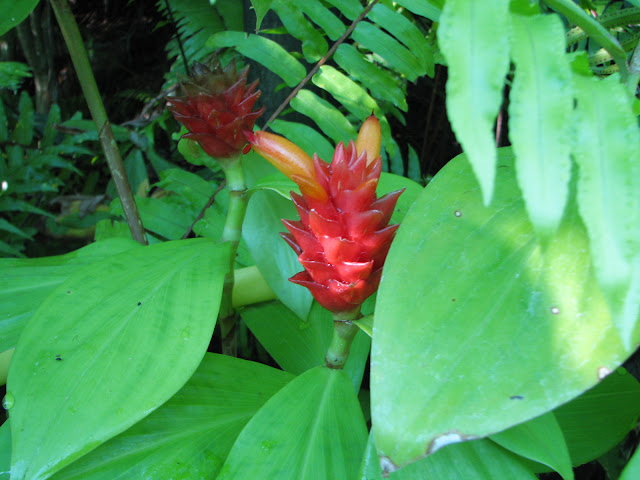 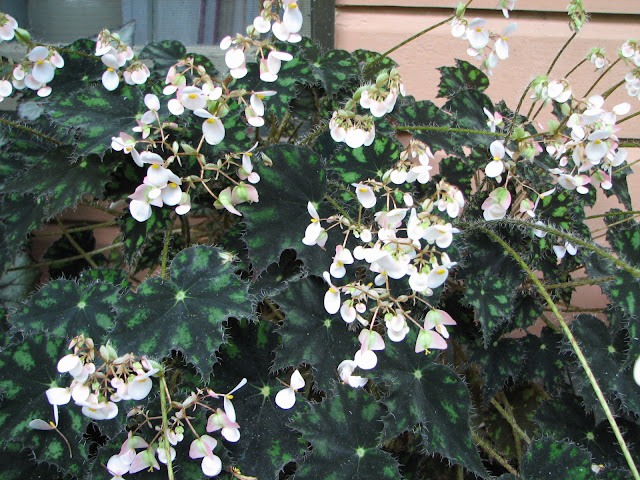 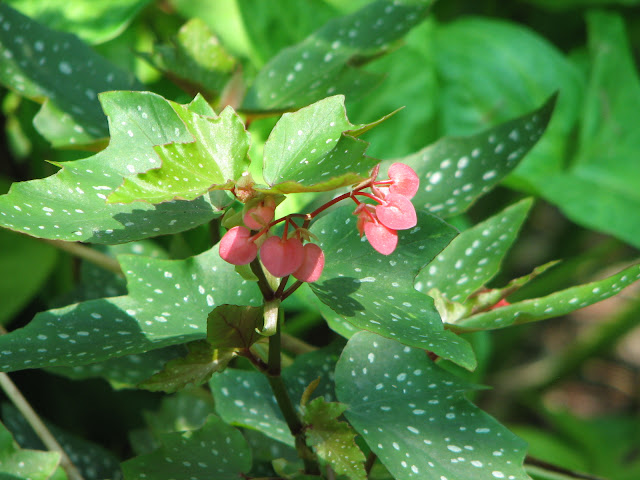 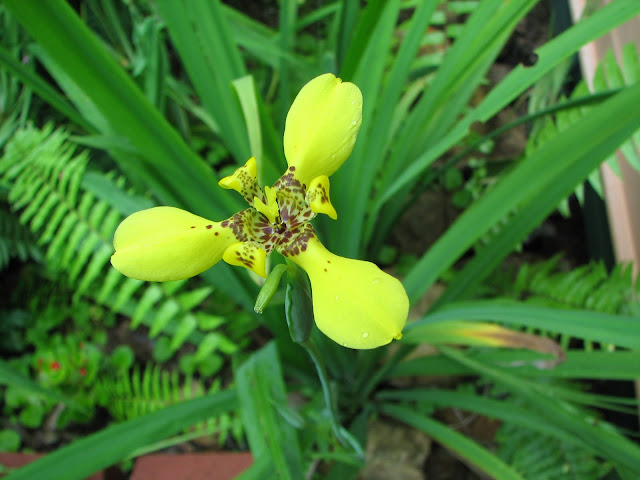 and the Neomarica longifolia clumps are all in bloom right now.  These lovely Yellow Walking Iris flowers only last one day but there are loads of flowerbuds waiting to take their turn to bloom. 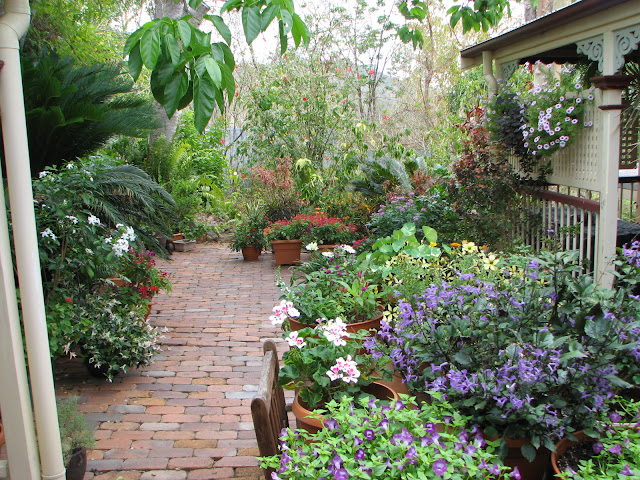 The Courtyard Garden is also full of lovely colour ... it's just a shame quite a bit of it is sitting up on the table far away from the nibbling mouths of the Agile Wallabies. 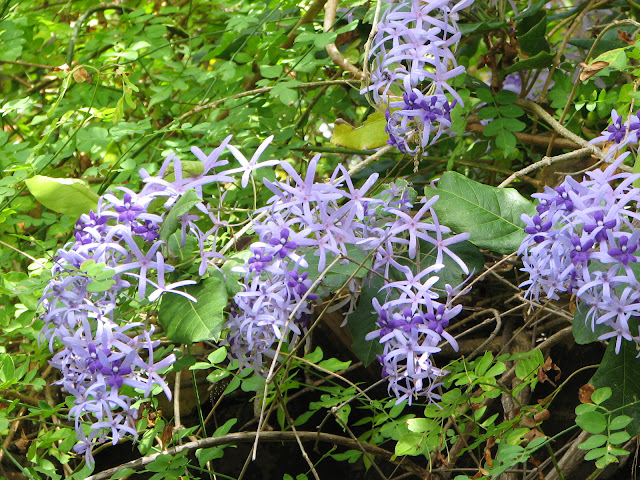 The Petrea volubilis or Sandpaper Vine draped over the pergola is blooming. 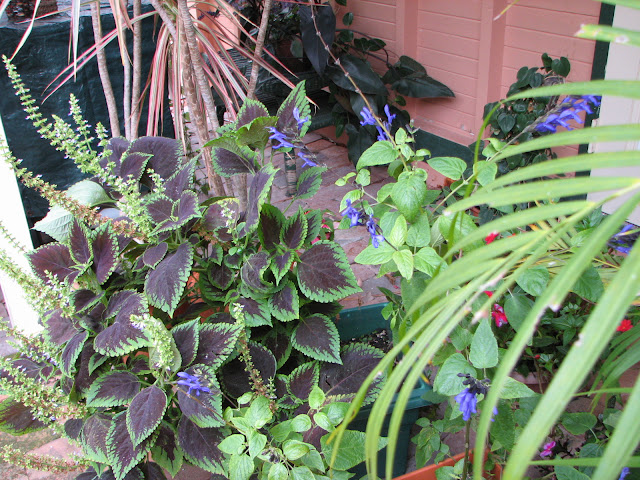 The Salvia guaranitica decided to bloom once more, but unfortunately the wallabies discovered it last night and the little thing is not as full of blooms this morning.  It's a shame they haven't developed a taste for Coleus flowers because there's plenty of those!! 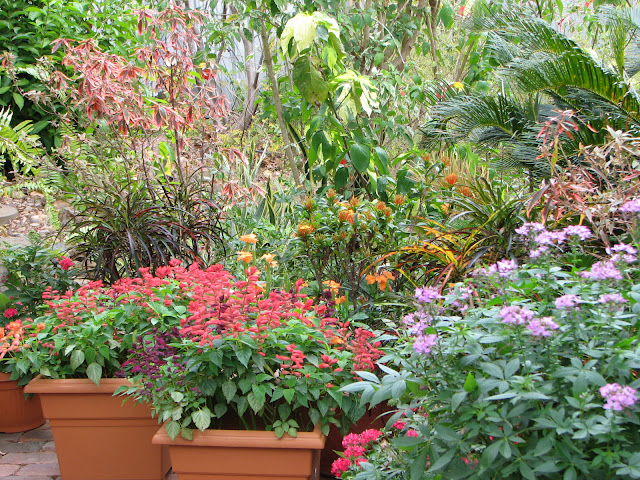 The Salvia splendens, Crossandras, Ixora, Pentas and Cleome make a great combination of colours at the back of the courtyard. 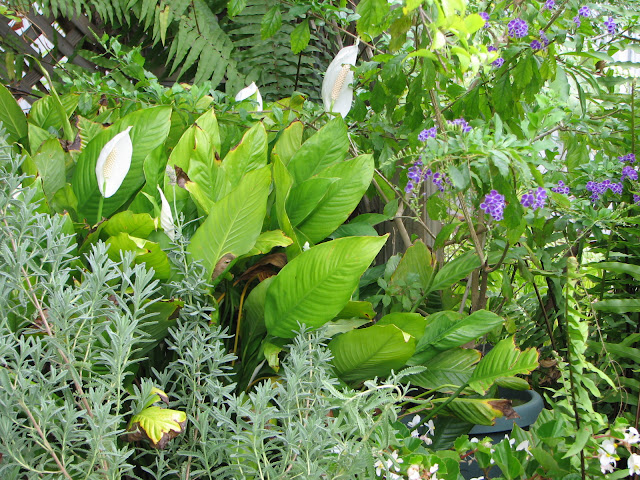 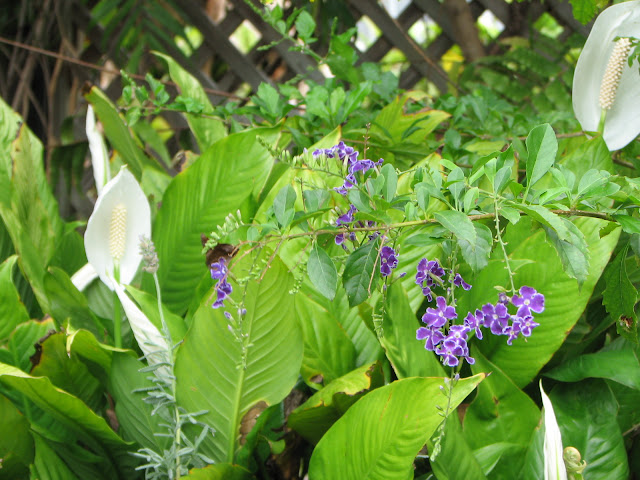 It's great to see the Duranta in flower out in the courtyard, as I've been missing the fabulous display of Duranta blooms that's usually on show down the driveway at this time of year. 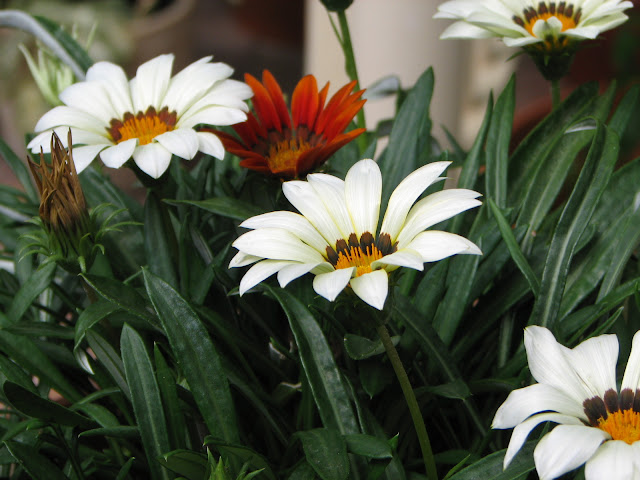 I'm also absolutely loving the flowers on the Gazania 'Big Kiss' series.  They have been loving the dry season conditions. 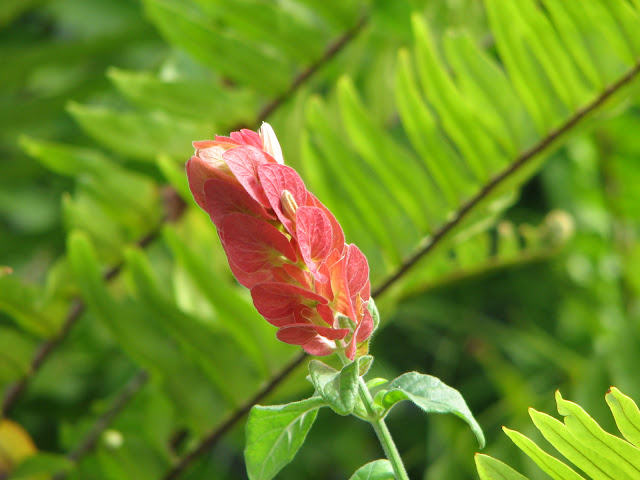 Out in the tiered garden beds, my baby Justicia brandegeeana or Shrimp Plant is beginning to bloom again. 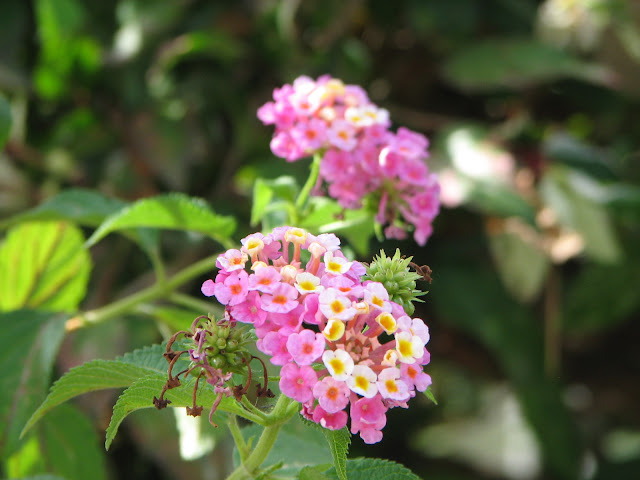 Now for a most unwelcome bloomer.  Quite a bit of Lantana camara is popping up in the driveway garden beds, obviously blown in during Cyclone Yasi earlier in the year.  This Lantana is a 'weed of national significance' in my country and in my northern state it is a declared Class 3 species weed.  It very quickly gets out of control and can form massive great thickets.  We're surrounded by bushland that's filled with very dense thickets of it and despite my husband's best efforts over many years, we have not been able to remove it.  It is extremely difficult to kill off.  I'm having lots of trouble keeping it out of our property now as well.  Lovely flowers, but not wanted!

I know one of the gardening chores that will be on the list for this weekend.  Enjoy yours! 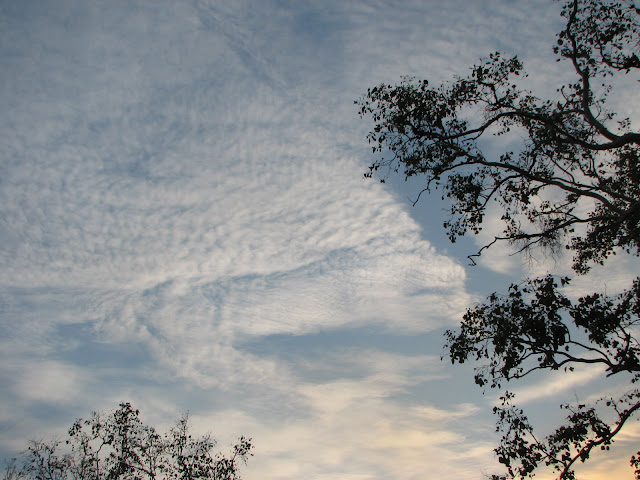 Today I'm joining Tootsie for her Fertilizer Friday / Flaunt Your Flowers meme.  Make sure you pop over to see what's happening in gardens from all corners of the globe.

Go and visit Today's Flowers as well and you'll find some beautiful blooms.

I'm also joining Skywatch Friday where you will find some fabulous sky shots, so please do put that on your list of blogs to visit as well.