El Nino ... La Nina ... it all sounded like Latin to me!  Maybe a Latin dance of some sort!  I had a vague idea what these terms meant, but never really bothered to become familiar with their exact meaning.  Sure, I heard them mentioned at times by well-meaning weather presenters, who were trying their best to educate me, but frankly, I just wasn't all that interested.  That was until a few weeks ago!

Please click on the following link and then hit the return/back button ... 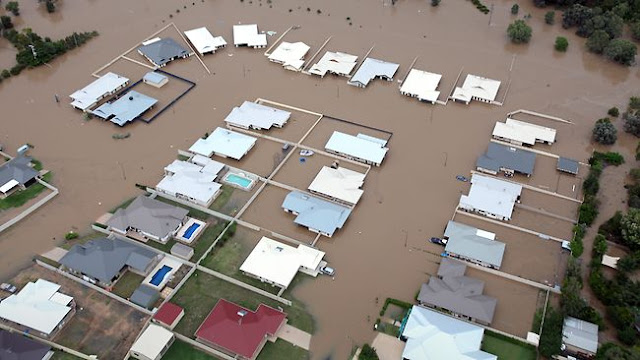 The disaster that's been unfolding in my home state of Queensland over the last month or so has made me stand up and take notice, finally! I can now have a knowledgeable discussion about significant weather events such as La Nina and El Nino ... and this can be directly attributed to the worst natural disaster that has ever affected Queensland.  This on-going series of disastrous floods is a result of a sudden change from an El Nino event, which resulted in a 14-year dry stretch in Queensland, to a La Nina event occurring in the Pacific Basin.

Here is a timeline of the disaster, which has now claimed a total of 19 lives:

September-November 2010: After years of devastating drought, the La Nina weather phenomenon drenches the northeastern state of Queensland with its wettest spring on record.

December 2010: Torrential rains and flooding damage crops and close a coal mine. Six people die, including three trapped in cars and a girl, 17, whose foot is stuck between rocks as the waters rise. (This happened at a popular swimming spot not very far from my home!)

December 28: Disaster declared in several southern Queensland towns, where flooding prompts mass evacuations. A 50-year-old man dies after being swept off a footbridge by floodwaters.

December 30: The town of Bundaberg north of Brisbane experiences its worst flooding in decades, with about 300 homes inundated.

January 2: Floods affect 22 towns as the crisis reaches "biblical" proportions, according to the Queensland state treasurer. A woman dies after her car is swept from the road.

January 3: Residents of Rockhampton flee their homes as the city of 75,000 is almost entirely cut off by rising floodwaters. The raging waters claim two more lives.

January 5: Officials say floods have inundated or cut off 40 towns while dozens of coal mines are flooded.

January 8: Police recover the body of a young woman who drowned after going swimming with friends, bringing the death toll to 11.

January 10: Eight die including four children and 72 are missing when flash floods smash the mountainside town of Toowoomba and surrounding areas. 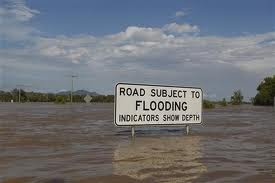 Now, for those who prefer a more interactive experience, here's a presentation that covers this timeline:
Queensland Flood Disaster

Tomorrow our capital city is expecting flood waters to reach their peak.  Both my sons and my grandchildren live there ... so we're a little concerned but hoping that all will be well!  To other bloggers who live in and around Brisbane, I have my fingers and toes crossed ... and I've been having a quiet word with the Almighty!

Even though this is the end of my blog post, I know it's not the end of the flooding disaster story for Queensland.  Cyclones are being predicted for the north, which is where I live, with the accompanying torrential rainfall.  This will, of course, cause even more drenching of a totally saturated, soggy, drenched state ... the start of 2011 will long be remembered!
at 8:57 AM