More Of ... The Things You See Sometimes!

So, hubby and I have been busy over this long weekend doing a few things here and there around the place ... repairing, tidying up, cleaning, weeding, planting, watering, mowing and trimming.

My dear hubby worked hard at getting some repair work done this weekend.  He was re-building the block wall he had to knock down a couple of weeks ago when he was looking for the source of a leaking water pipe.  The repair job wasn't quite as easy as he hoped and he was head-down trying to get it sorted.

At the same time, I was about the place trimming back some plants and pulling out some weeds that had exploded after the arrival of Cyclone Ita's downpour, when suddenly, I heard my name being called. 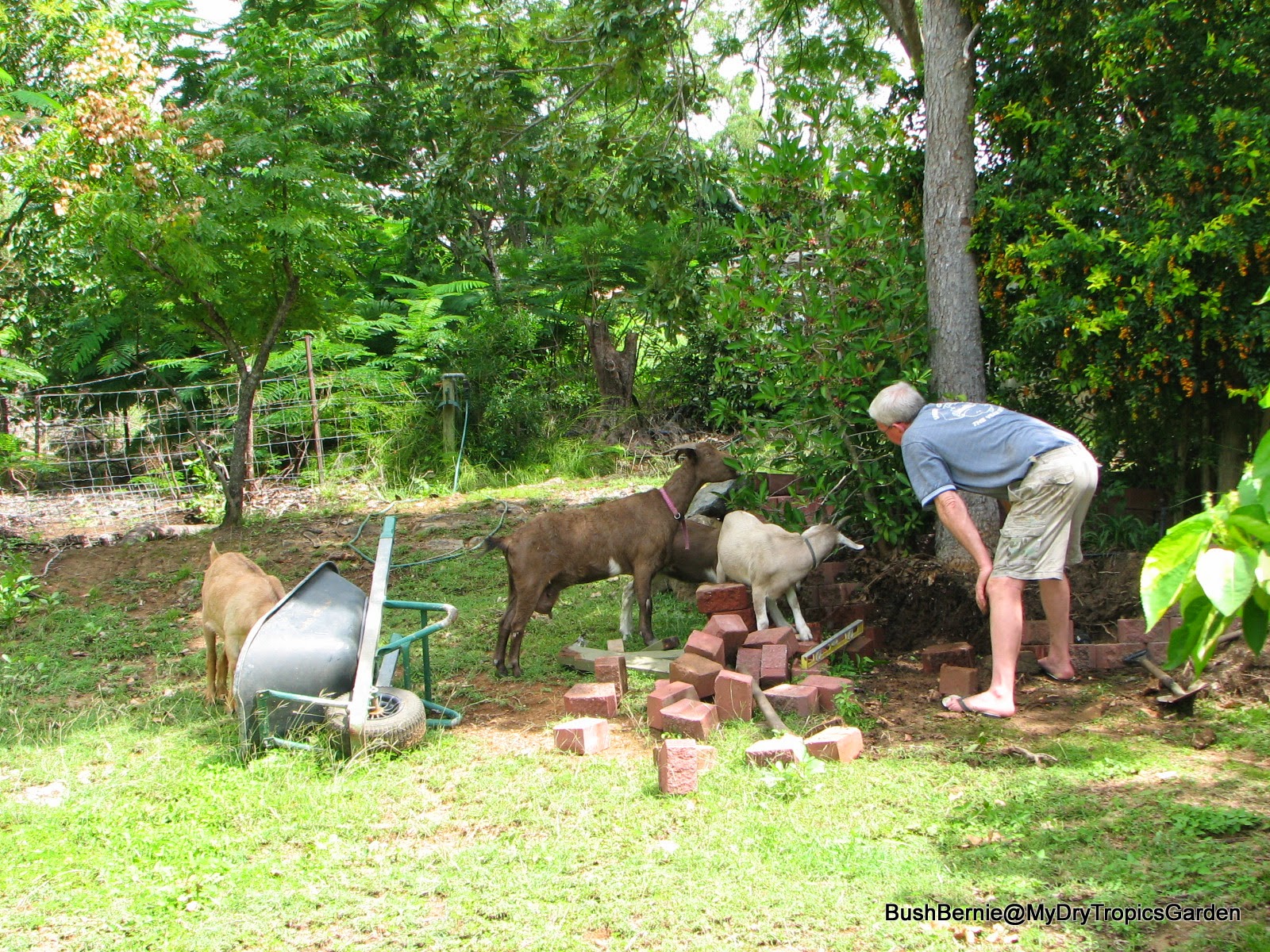 Some little visitors had crept up behind hubby and decided to help a little with some trimming back of the plants in the garden beds.  No doubt they thought it was the right thing to do! 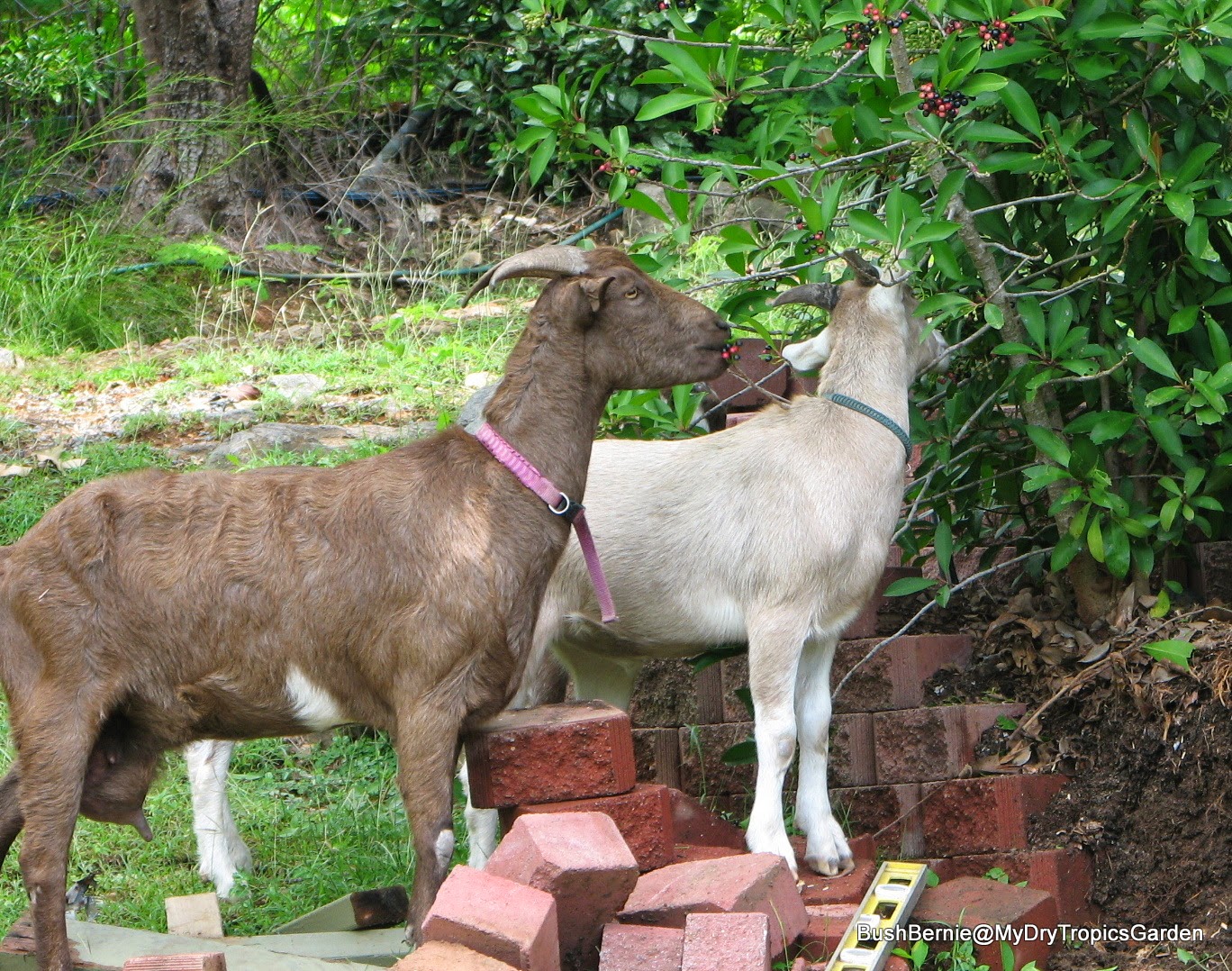 No, these are not our goats but belong to our neighbour.  Occasionally the goats will wander into our bush paddock or front yard, but we don't really see them all that often.  Yesterday, they just didn't seem to want to leave and they found all sorts of lovely things to nibble on and chew through. 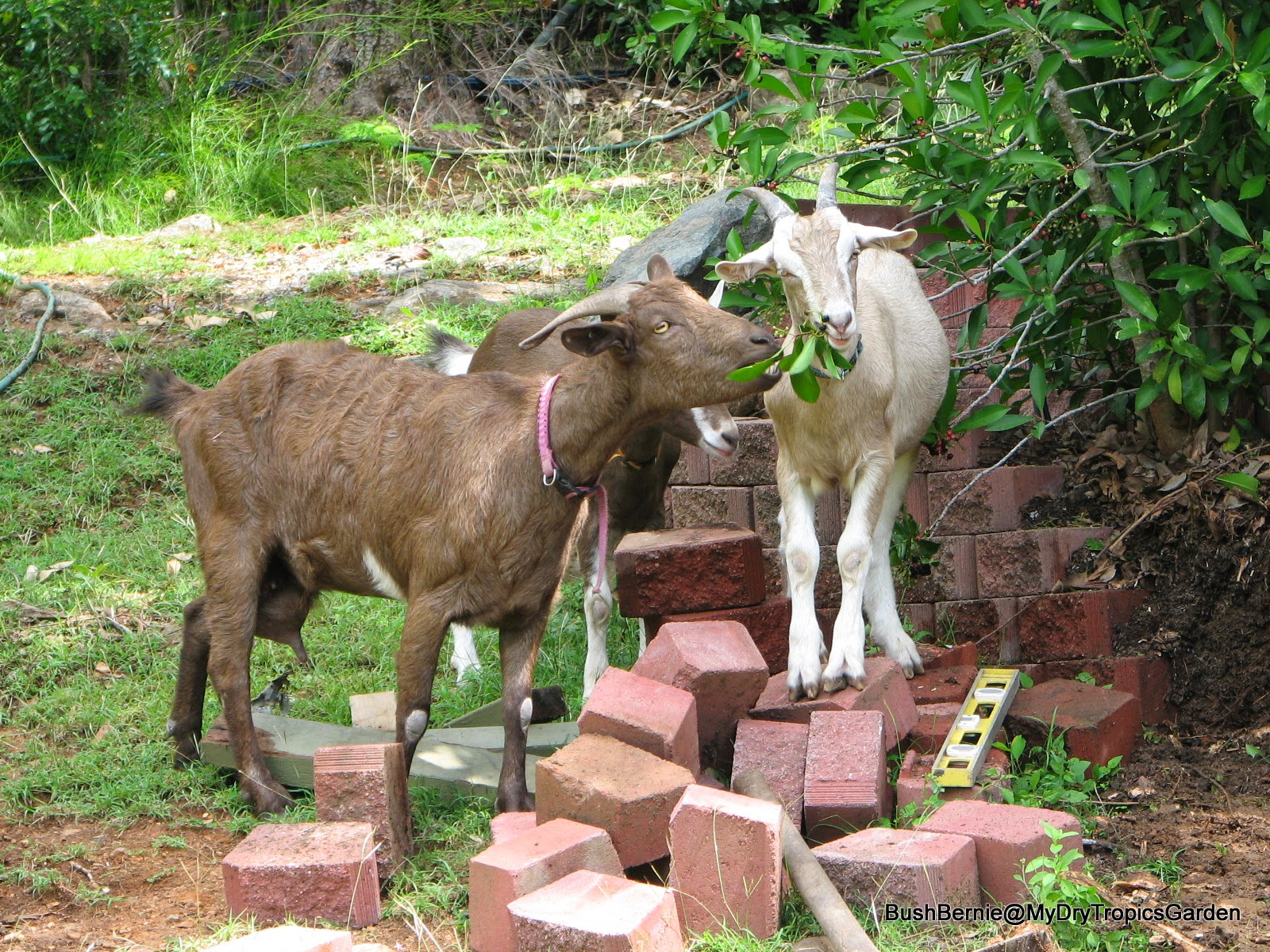 They loved the Ardisia leaves and the berries. 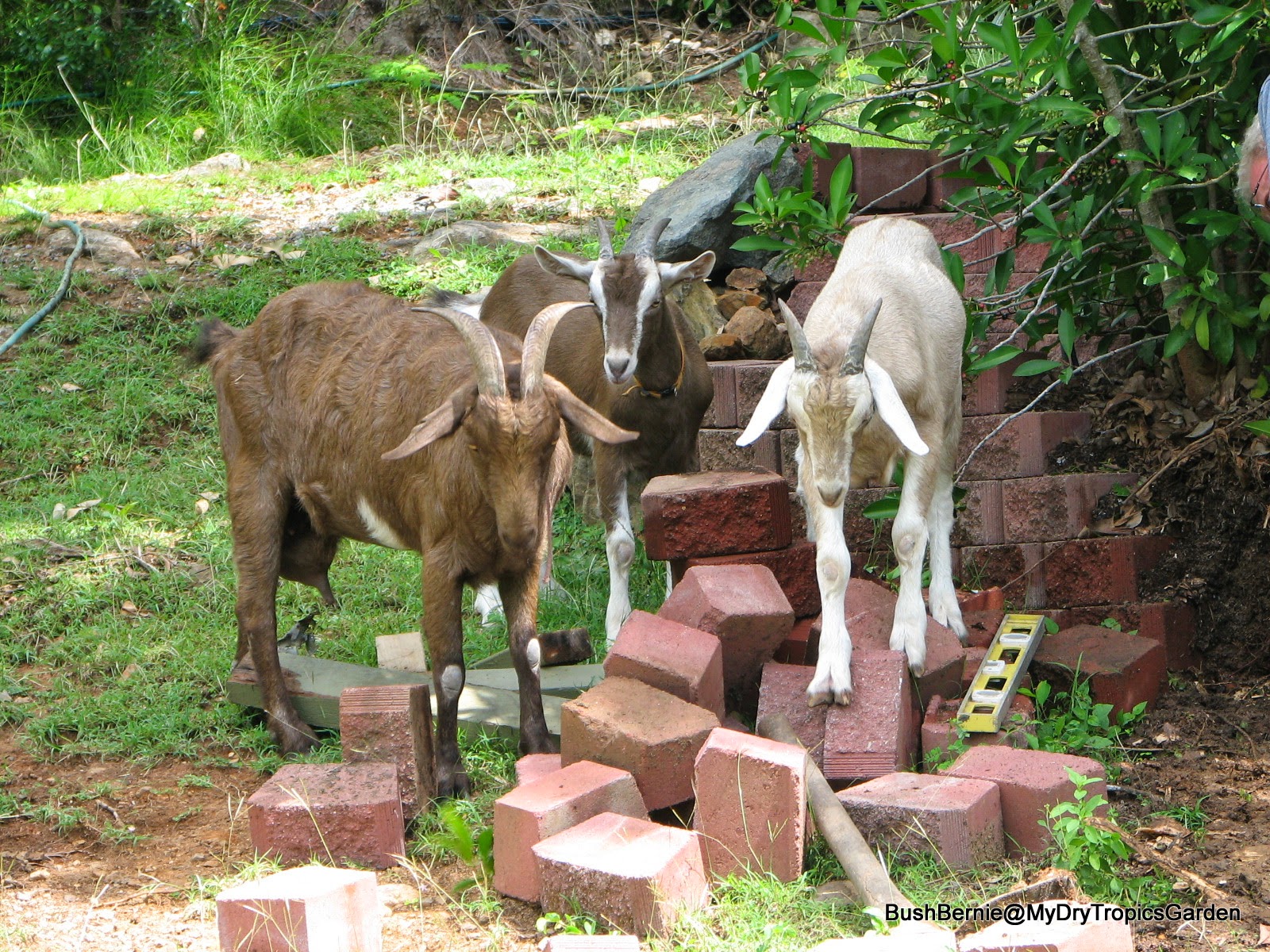 They also loved the Daylily leaves, but they were told off in no uncertain words that they were off limit.  They looked decidedly forlorn then. 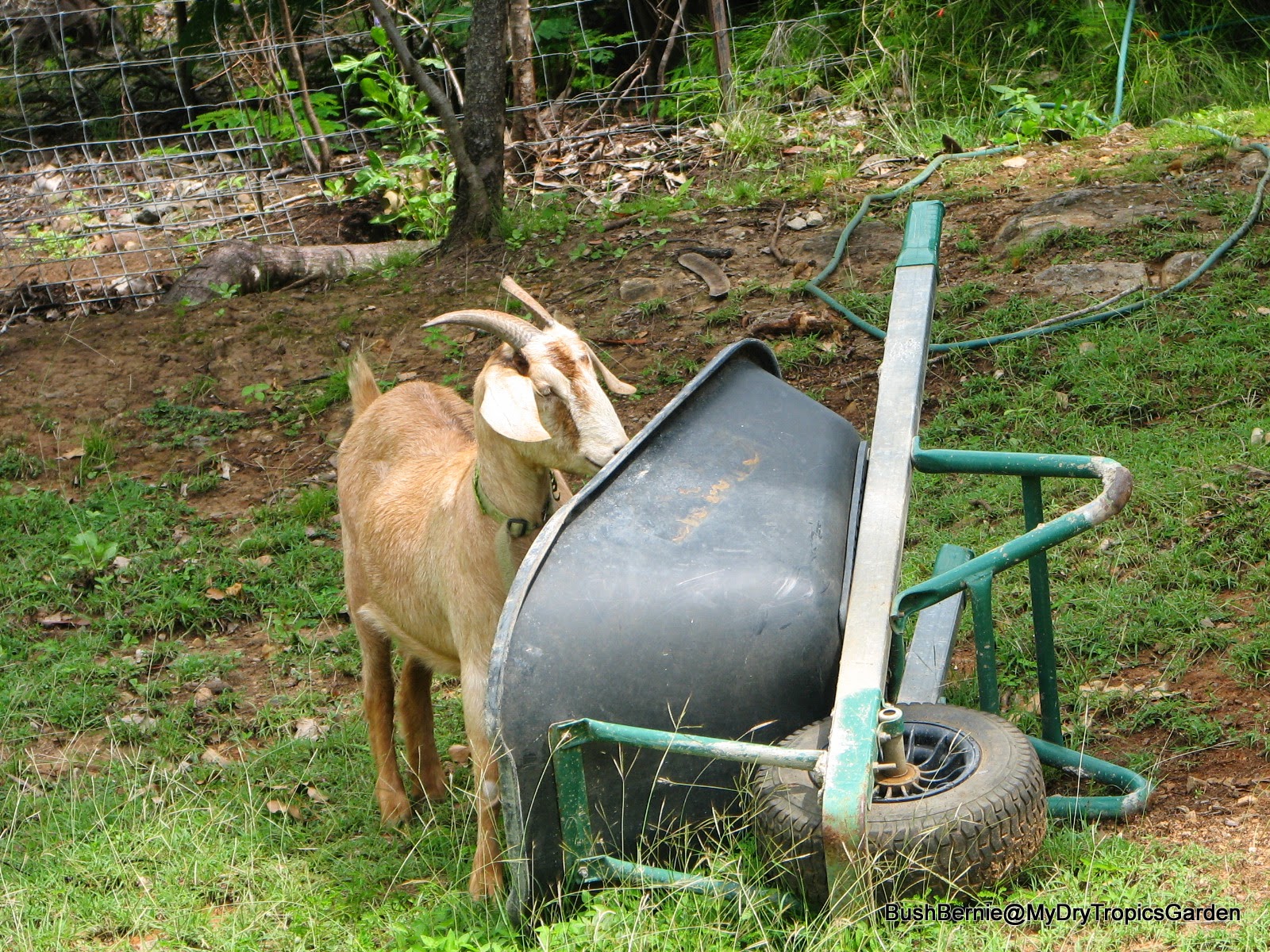 Apparently there was something rather tasty in the wheelbarrow as well. 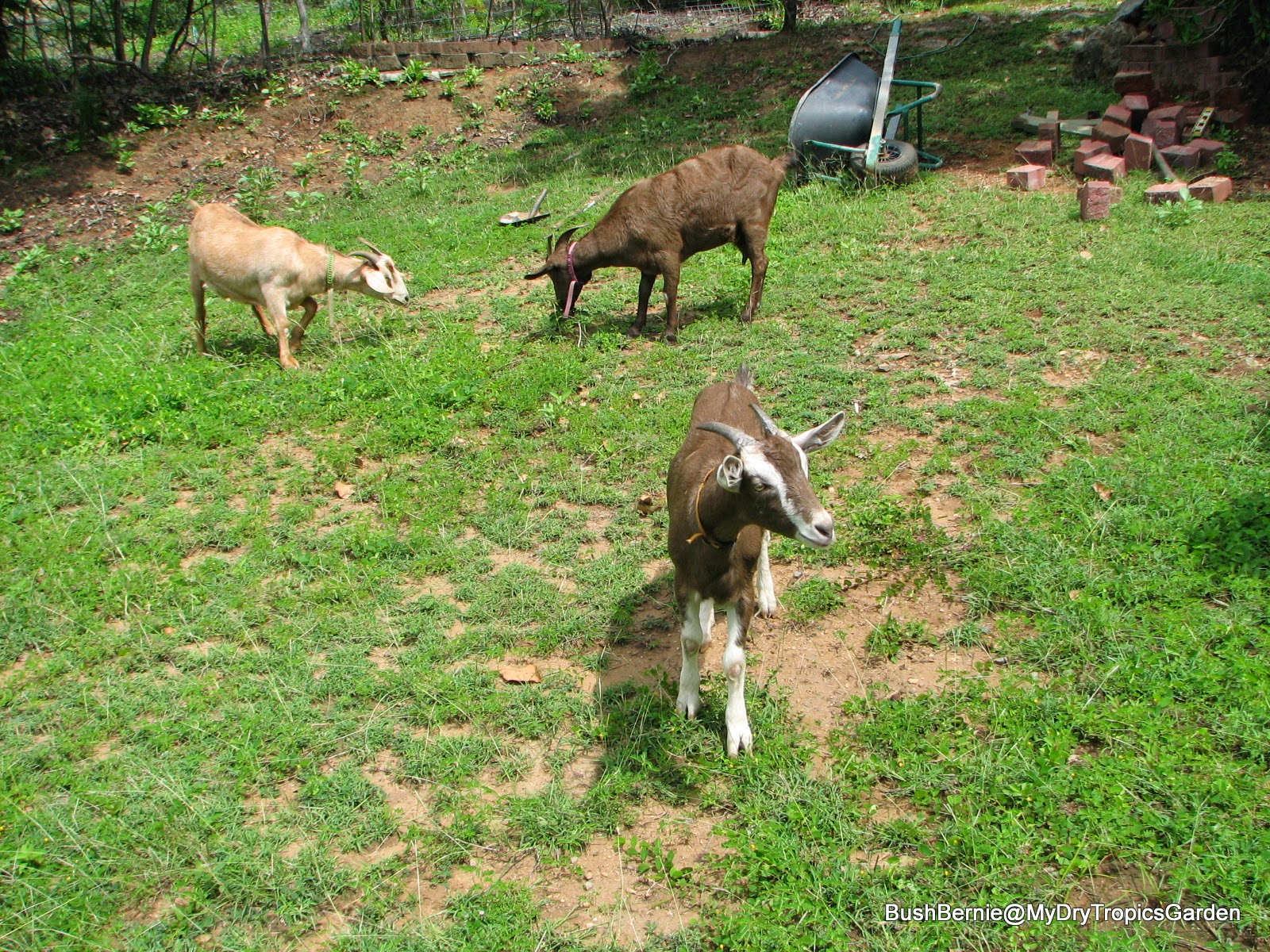 I didn't mind at all having them gobble up the weeds growing in the yard, 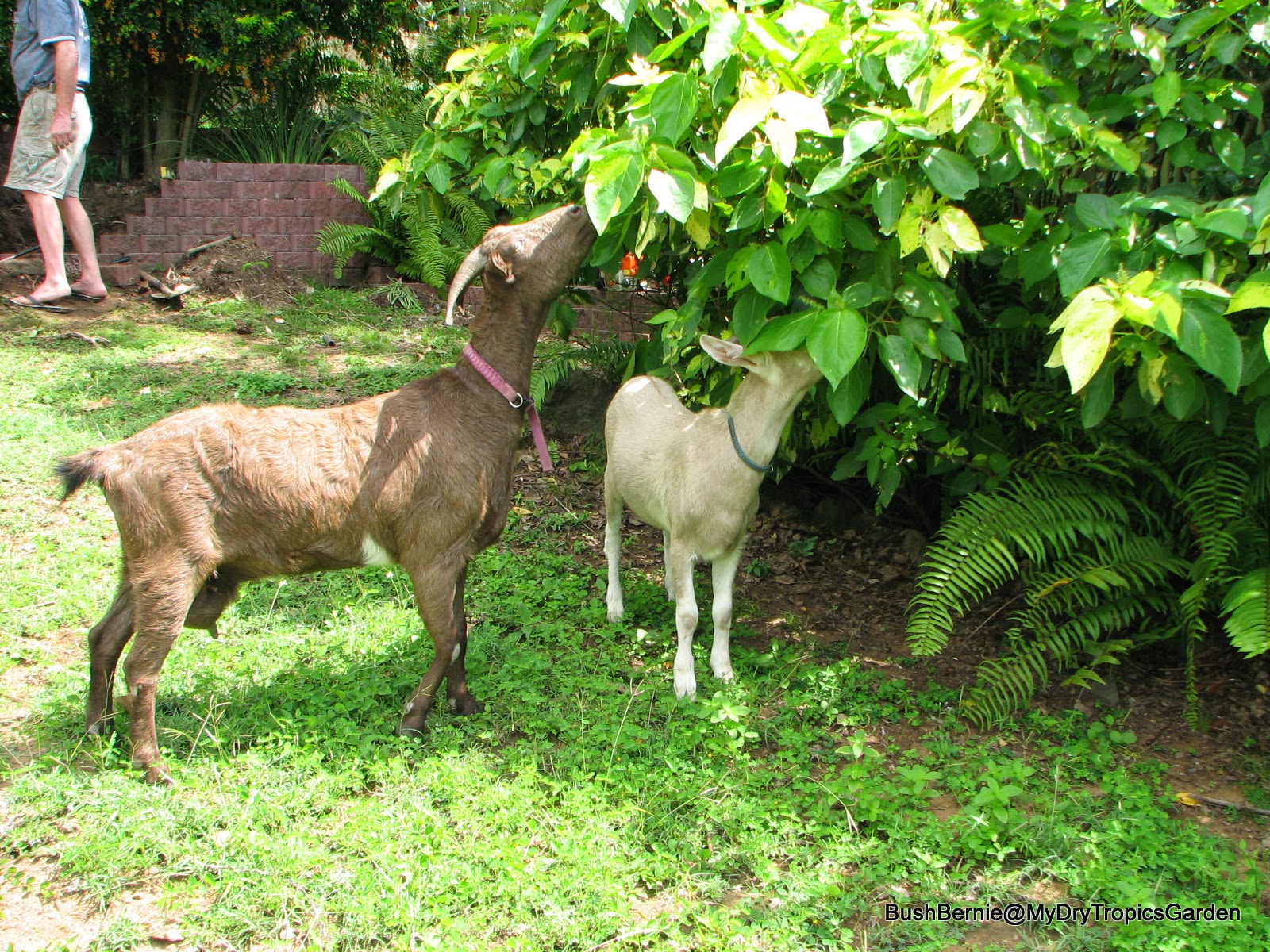 but I wasn't all that keen on seeing the leaves shredded on the Acalyphas in the front garden bed. 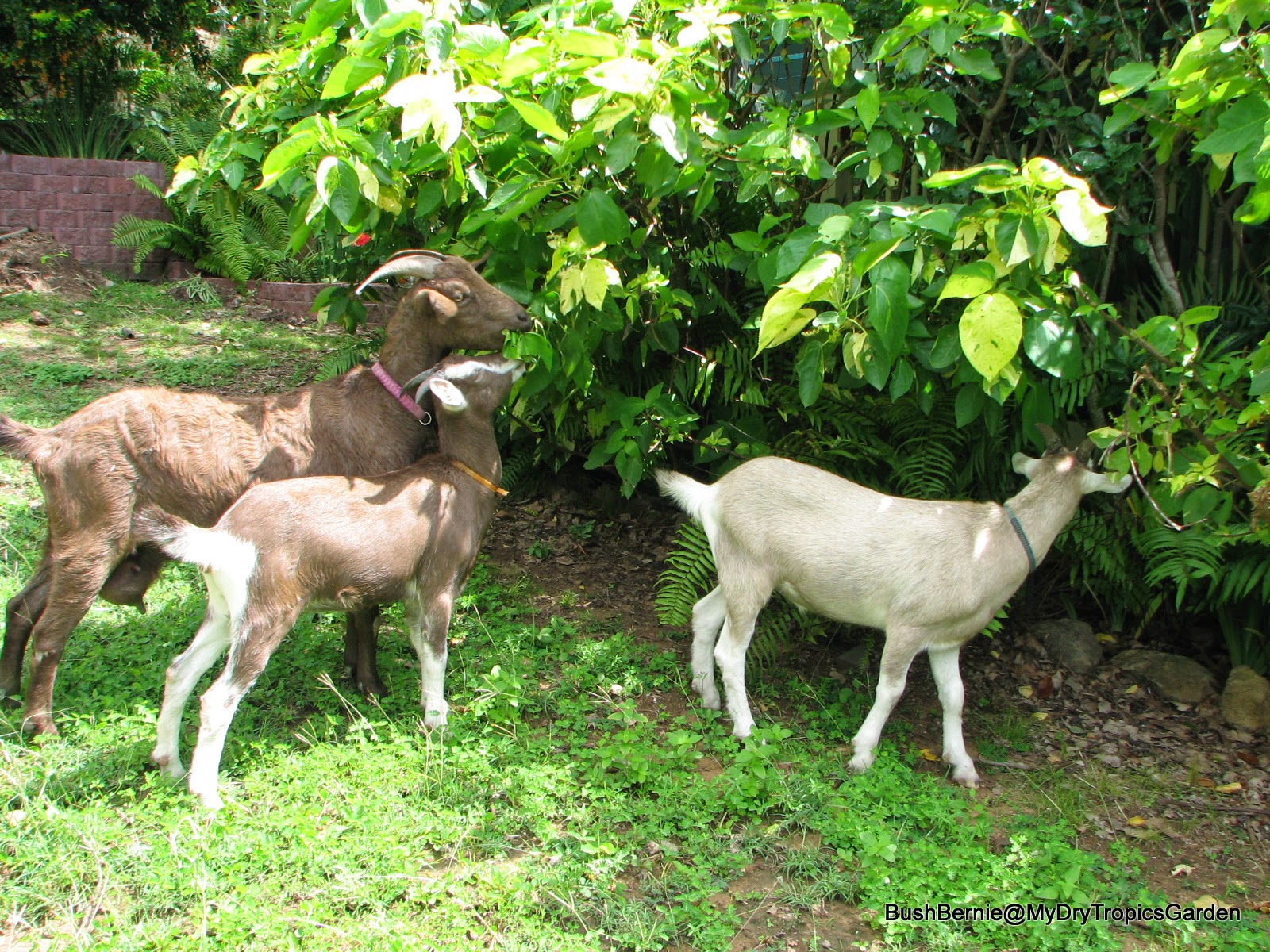 They took some convincing to move on! 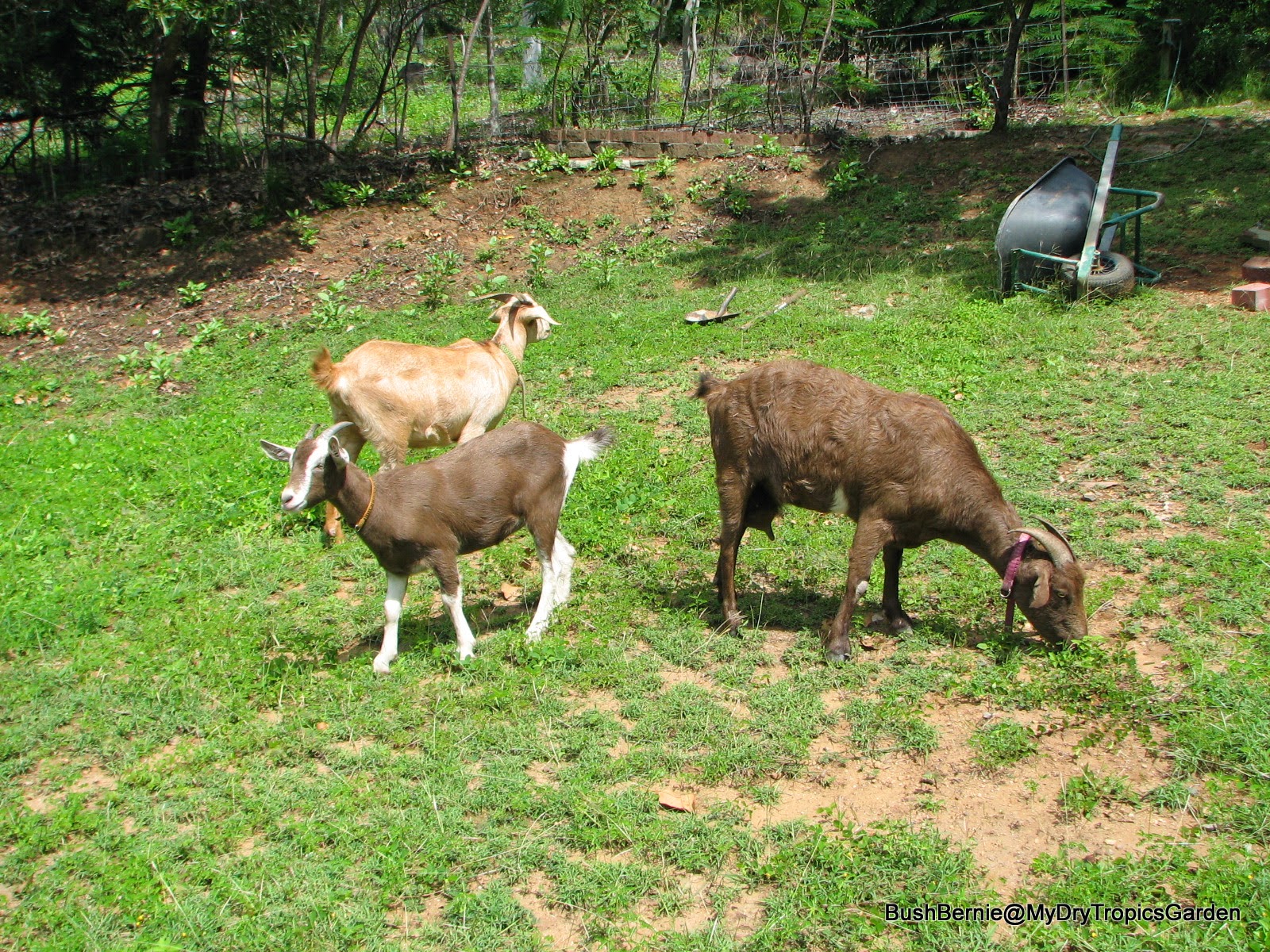 Well, those were yesterday's visitors.  Today we saw a creature that didn't inspire the same feelings of good cheer. 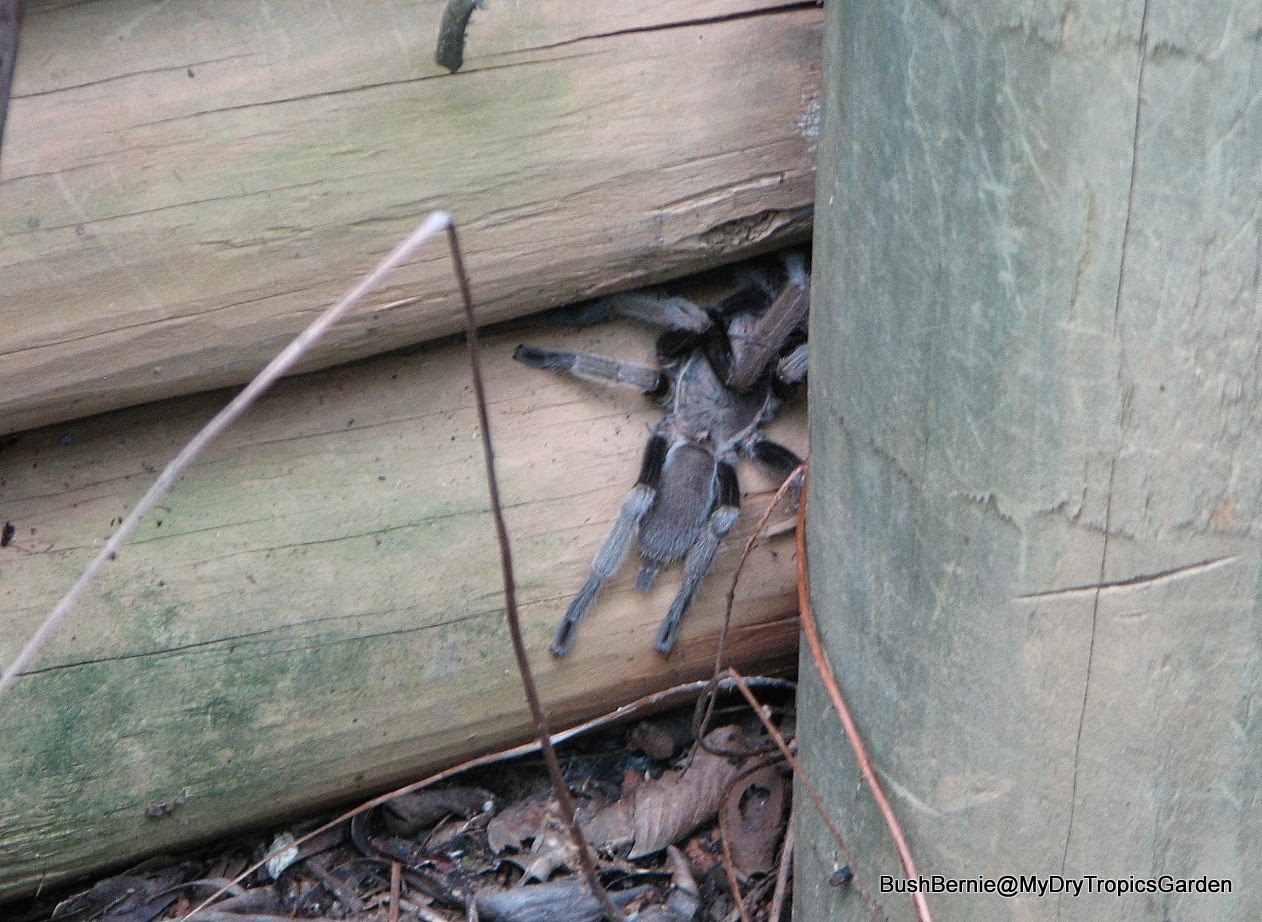 We were cleaning up in the shadehouse and it took quite some time to notice this creature.  It was huge and hairy.  It would have been about the size of my hubby's hand, maybe a little larger as we didn't quite get to see all of it.  Not only is it bit and beastly looking, but it was damn quick too.  We've no idea where it headed off too, but we gave the shadehouse a bit of a wide berth for a while.  I think it might have been a Bird-Eating Spider.

So, there you have it.  We can get some interesting visitors here.

Email ThisBlogThis!Share to TwitterShare to FacebookShare to Pinterest
Labels: wildlife