Season's Greetings To All

Wishing all of you a very Happy Christmas.  May your Christmas season be filled with the joy and laughter. 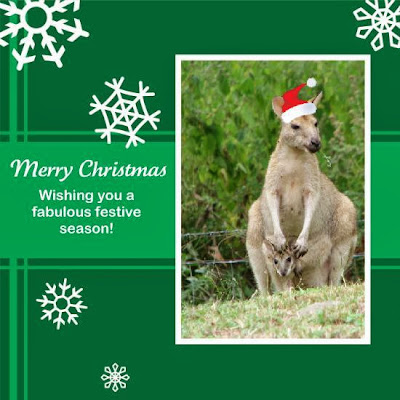 I'm taking a little break to spend time with family over this time, but I will return in the New Year.
at 2:30 PM 3 comments:

Email ThisBlogThis!Share to TwitterShare to FacebookShare to Pinterest
Labels: Christmas

Flower Flaunt ... As Our Summertime Sets In

December is our first Summer month and the heat and humidity have arrived.  The arrival of our wet season has stalled for a few weeks now it seems.  My last Flower Flaunt post was posted at the end of November, and I excitedly told about what appeared to be the early arrival of our wet season.  Well I think Mother Nature was teasing just a little as it's been dry since then. 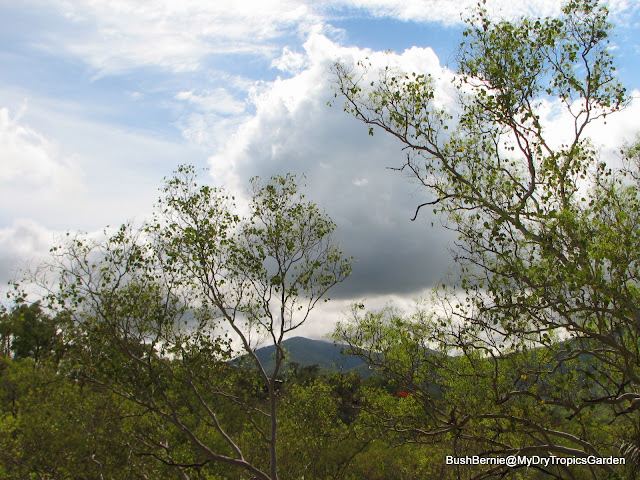 Even though we get a glimpse of dark grey off in the distance, it disappears from view as quick as a wink, blown away somewhere else.  It's so disappointing watching the grey sky turn to bright blue and puffy white within a matter of minutes. 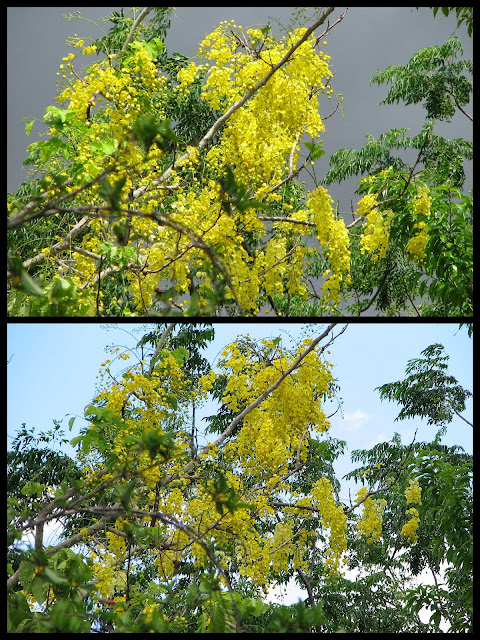 Here's a classic example from this morning.  The first photo was taken at around 11.30 and the second was taken just before 12.00.  Damn those blue, puffy-white-cloud-filled skies!  I do get tired of seeing them after a long dry season. 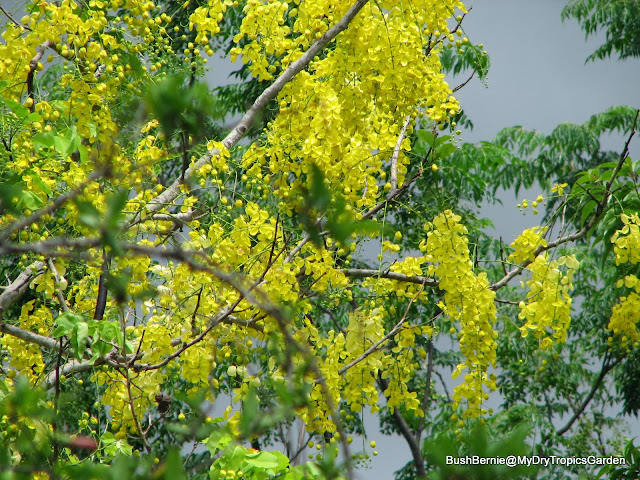 Ah well, the photo brings me back to the original topic, blooms for the week.  My Cassia fistula, commonly known as Golden Showers, has finally bloomed.

It is always the last one to bloom in my neighbourhood, it seems.  Every year I watch with envious eyes as all the other trees around here break into bloom and show their fabulous golden racemes.  Then I wait patiently for mine to catch up.  It seems to wait until the first or second week of December before joining in the Golden Shower bloom party.

Another thing that has been particularly late in blooming this year are my Hemerocallis that are planted in the tiered garden beds.  Usually the collection begins blooming in mid-Spring, which is October here, and the last of blooms are on show into late December.  This year has been completely different. 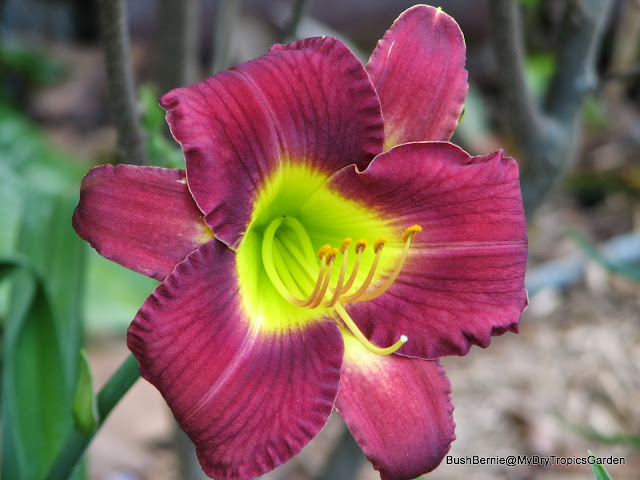 Hemerocallis 'Jamaican Midnight' threw out a couple of flowers just last week, but only a couple. 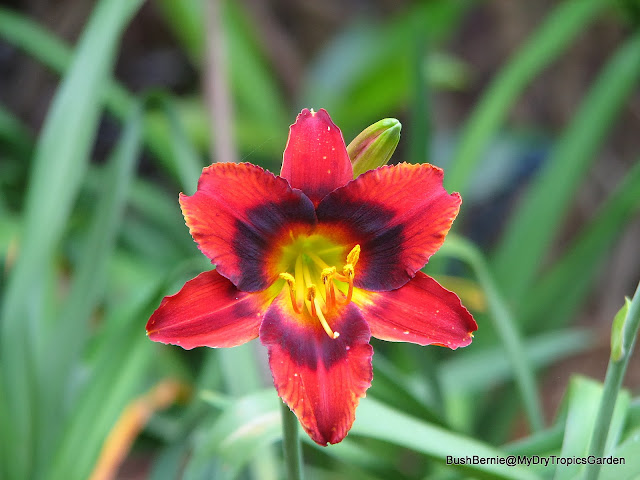 Then this morning my little Hemerocallis 'Velvet Eyes' has one beautiful bloom on show, with a couple more waiting in the wings.  But that's been the extent of the Hemerocallis show so far this year.  I haven't quite figured out why yet, and I'm watching eagerly to see just how many bloom given that our horrid summer is already upon us. 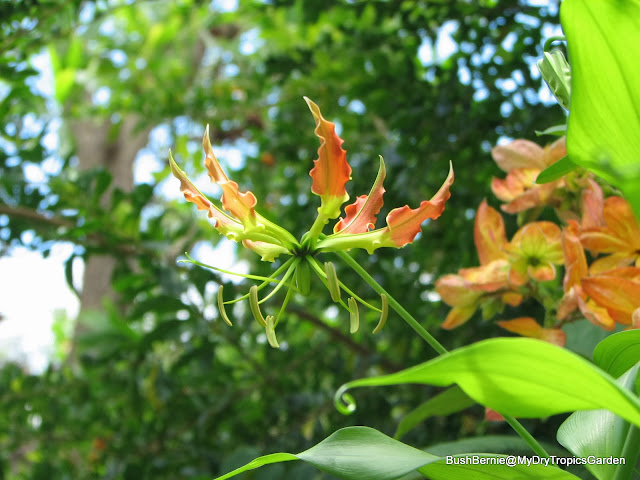 One very unexpected sight in the tiered garden bed this morning, was this Gloriosa rothschildiana or Gloriosa Lily.  I can't tell you how blown away I was when I spotted it.

I had been given a little baby plant a couple of years ago, and had popped it in the top tier of the tiered garden bed.  I really thought I had lost it during Cyclone Yasi.  That part of the garden was flooded in biblical proportions, blown to shreds by fierce cyclonic winds, and an enormous Duranta was blown over and demolished quite a few plants during its downfall.  But then to add insult to injury, during the clean-up, there was also a lot of unavoidable trampling and crushing of lots of plants in that section of the garden. 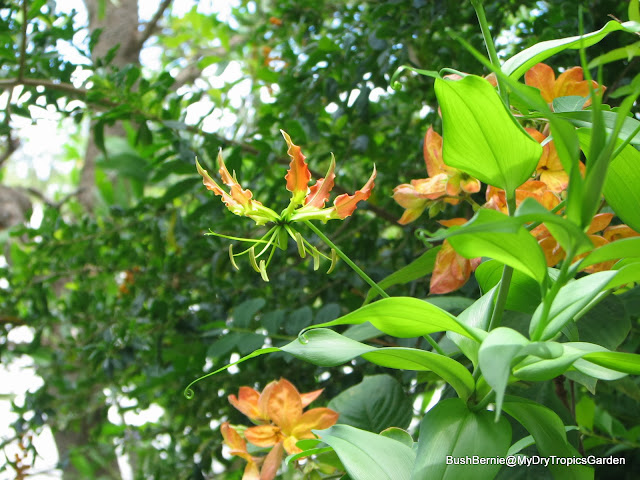 Having had no sight of the plant at all afterwards, I had written it off as another of the losses of the great cyclone of 2011.  Well, apparently the Gloriosa Lily turned out to be a survivor after all.  I'm constantly amazed at just how resilient some plants are.  Gardening is always a world of surprises, because here it is climbing its way up the branches of an Aralia and the neighbouring Mussaenda.  How wonderful is that! 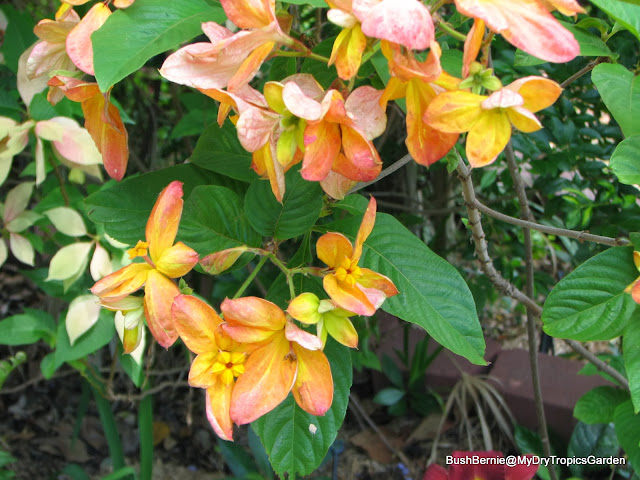 The colour of the Gloriosa Lily certainly matches the gorgeous oranges and yellows of the Mussaenda 'Calcutta Sunset' bracts and blooms.   They go well together. 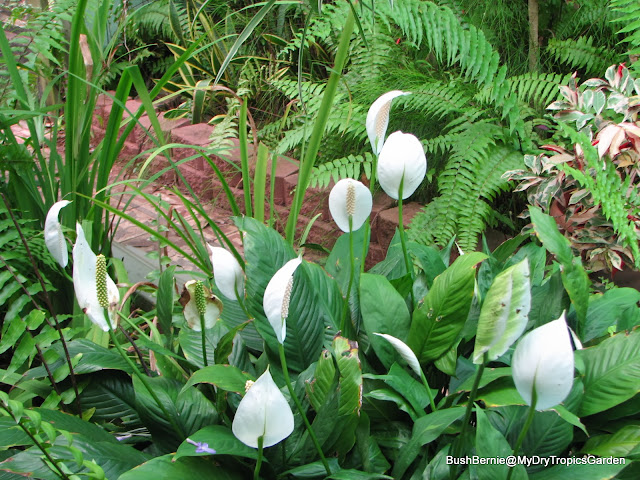 Elsewhere, in the shadehouse garden, the Spathiphyllum is blooming. 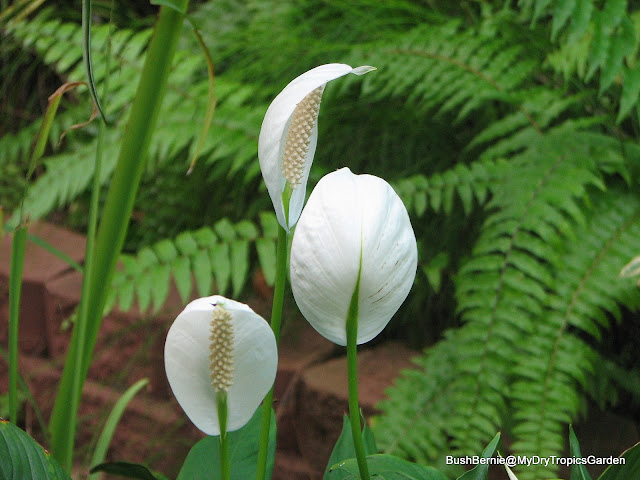 There's something quite refreshing about the sight of bright pristine white spathes on a blazing hot and sticky summer's day.  Maybe that's why I do so love splashes of white in the garden. 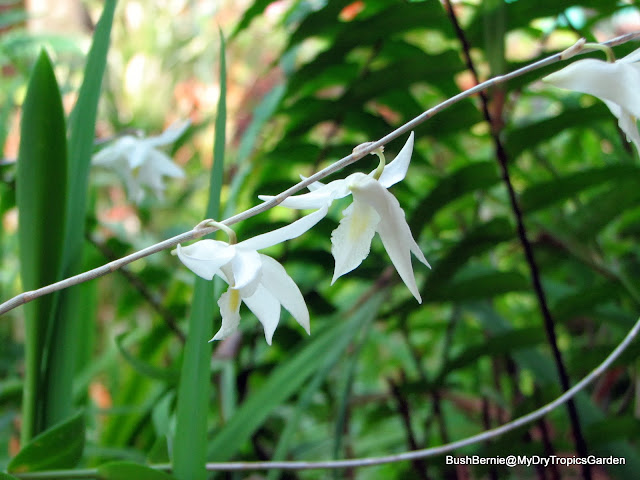 I also have a beautiful little Orchid that's blooming out in the shadehouse garden at the moment.  The white flowers on this are quite tiny, but absolutely lovely. 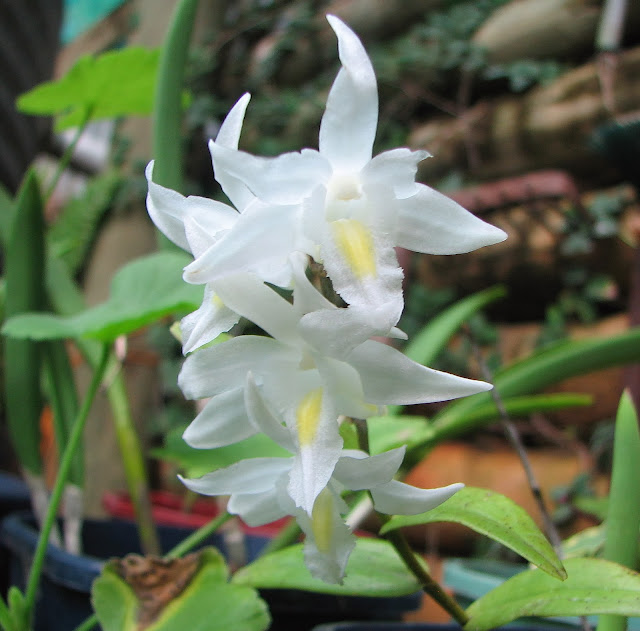 This is Dendrobium crumenatum, commonly known as the Pigeon Orchid. 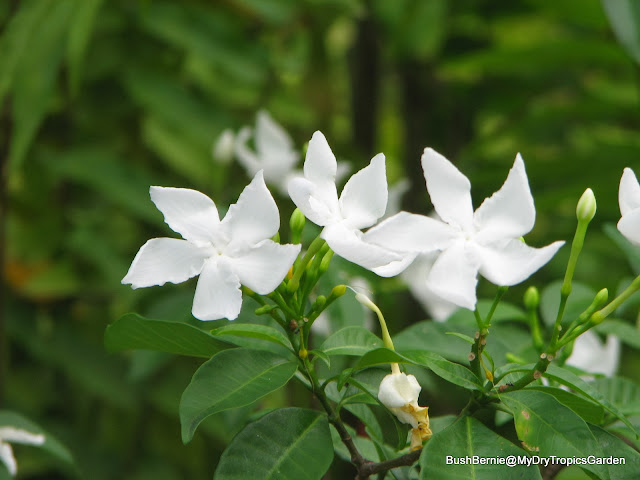 At the moment, I can also see the fabulous white flowers of the Tabernaemontana corymbosa 'Sweet Love', 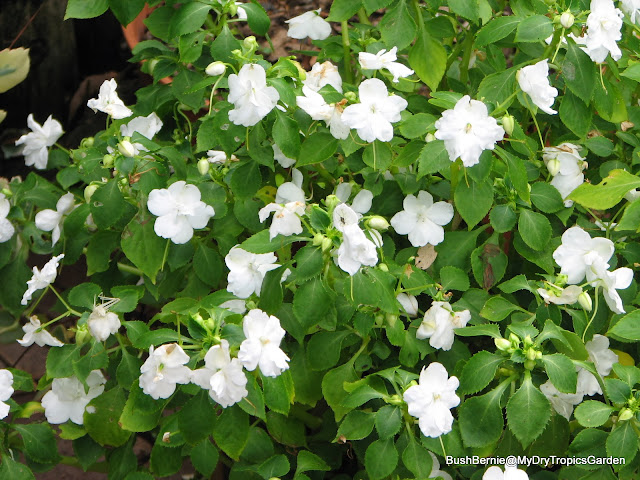 and the white Impatiens walleriana, out in the courtyard garden. 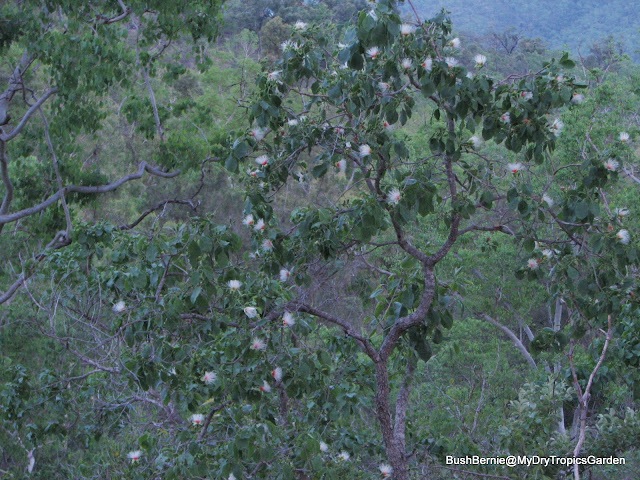 One of the lovely sights on a balmy summer's evening is the display of the night-blooming native Planchonia careya, or Cocky Apple tree, out in the bushland as well. 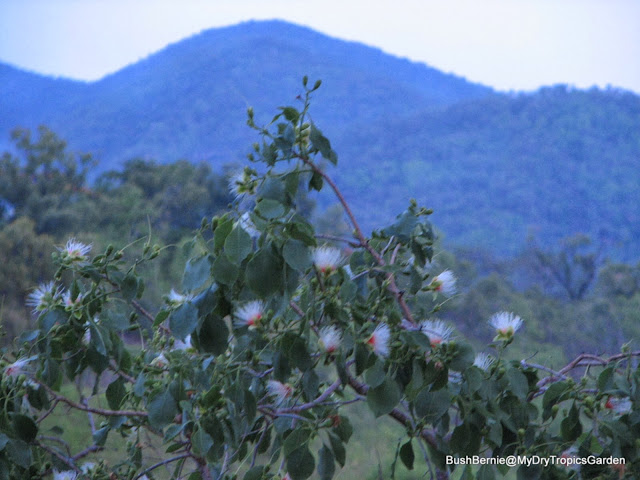 The flowers start to open as the sun sets, and they have dropped just after the sun rises.   It's those lovely splashes of white in the twilight that I just adore so much. 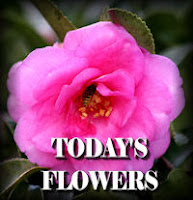 Email ThisBlogThis!Share to TwitterShare to FacebookShare to Pinterest
Labels: Flower Flaunt on Friday, Summer in the garden

It's Beginning To Look A Lot Like A Tropical Christmas.

The sun is starting to swelter.  The days are sultry.  The temps outside have climbed to very, very uncomfortable.  The humidity levels have risen to stifling.  The cicadas have started singing.  The Poincianas are blooming.  It must be nearly Christmas time here in the tropics.  Hot, steamy and sticky is the way we like our Christmases!!  That's the weather, not the food.

Anyway, the school year is over and I'm on holidays.  Yahoo!  I've been busy adding some Christmassy touches to the place. 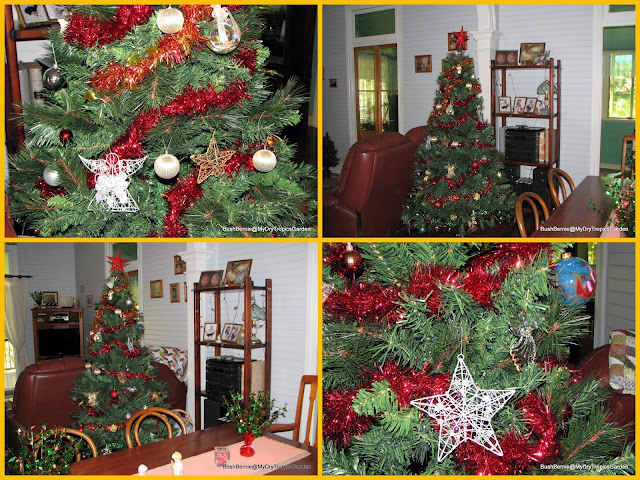 The tree is up and covered in ornaments collected over many years. 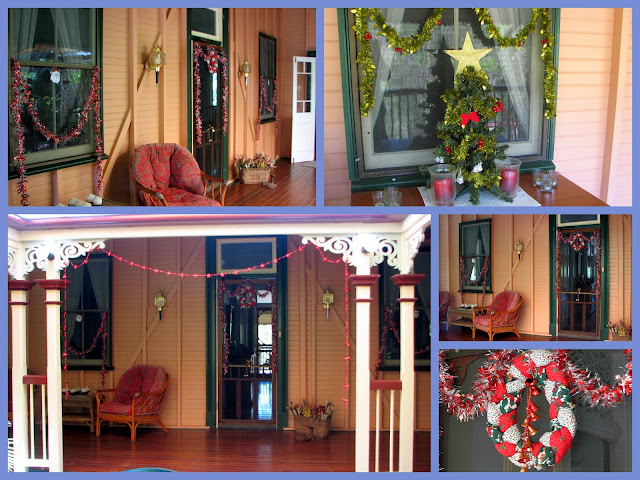 The verandah has a few Christmassy touches here and there. 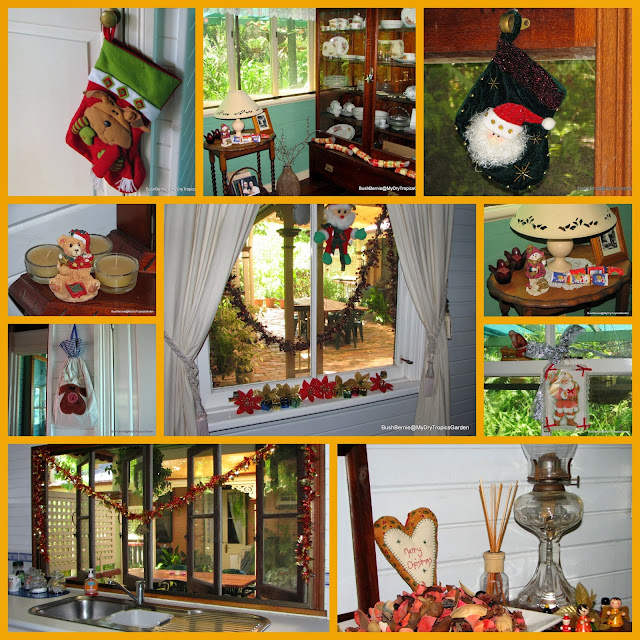 There are many, many little gifts, given to me by students over many years, all scattered about the house.  Of course, I did receive bucket loads of chocolates, smelly soaps or lotions, and coffee/tea cups over the many years of my teaching career.

I've been very appreciative of all the presents presented by happy-faced students over the years, but I have to admit that the gifts that were not chocolate, not smelly and not made of china have become very precious to me.  Even though they're not the most sophisticated or classy looking things, they can be brought out every year and add that special touch of Christmas joy.

What does your place look like this Christmas?  Do you have special things that bring back lovely memories?


Note:  After I had published this post, Google Auto-Awesomed one of my collages  (not sure that's a word, but what-the-hey!)  I love what 'they' did with my collage.     Here's the link.

Recent Posts From My Other Blog

The Weather At My Place

The Weather At My Place (metric)

The Time At My Place