Flower Flaunt ... On This Mid-Summer Friday.

Well here it's mid-Summer and 'wet' season, although it's been a dry ole 'wet' season so far.  We've had no rain for weeks now, so the garden has been sizzling and frying in the fierce sunshine and drying out in the high humidity.  Apart from the trusty common year-round bloomers, there are only a few other flowers around at the moment. 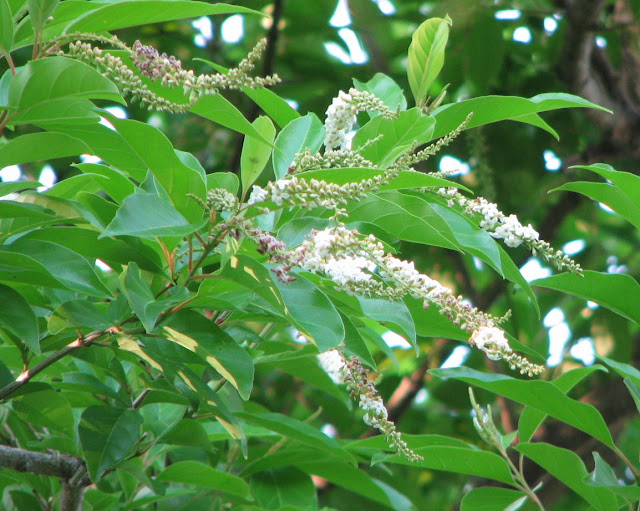 The Fiddlewood Tree at the end of the hill driveway is almost covered in sprays of white flowers .... 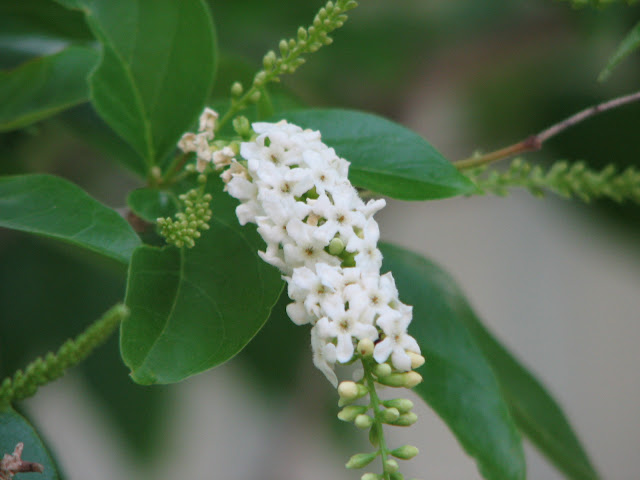 ... and the perfume from these brilliant blooms is absolutely heavenly.

The Courtyard Garden is not its usual colourful self at the moment, but 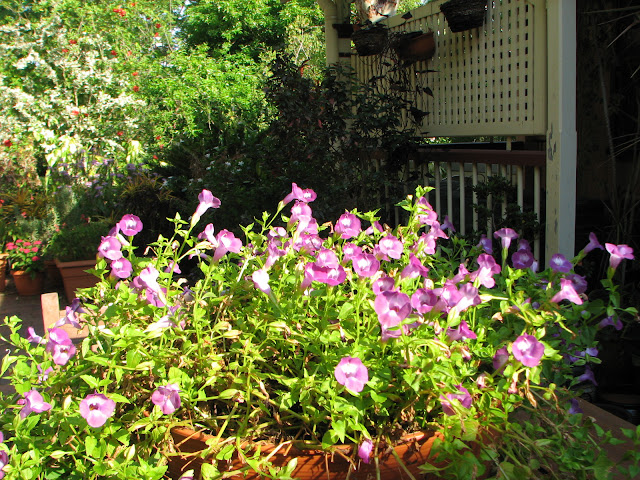 the pots of Torenia 'Violet Magic' are still blooming nicely. 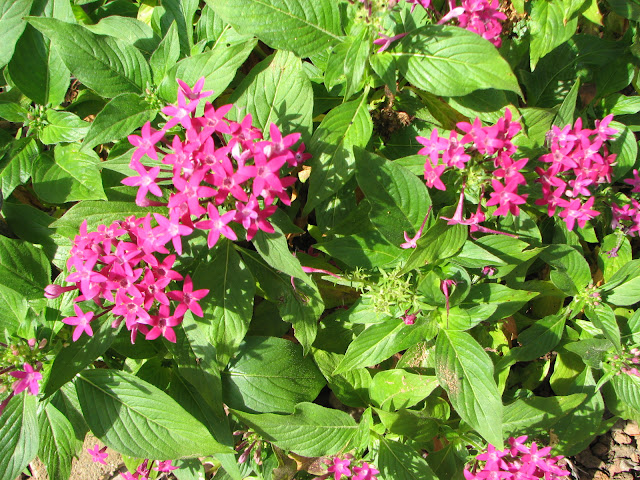 There's some colour from the potted Pentas, 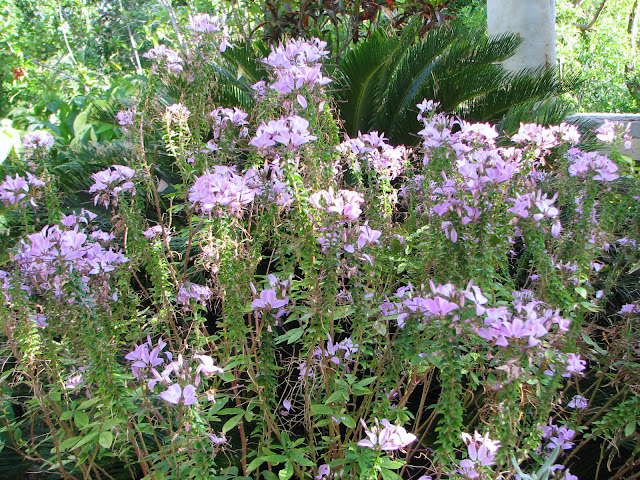 and the potted Cleome spinosa 'Senorita Rosalita' is still showing off wonderfully well. It helps that there's quite a bit of great foliage out there at the back of the courtyard.  At least that's one spot that's a little more cheery.

The Shadehouse Garden is looking rather overgrown and untidy once again, and there are only a few blooms to be found out there in amongst the chaos. 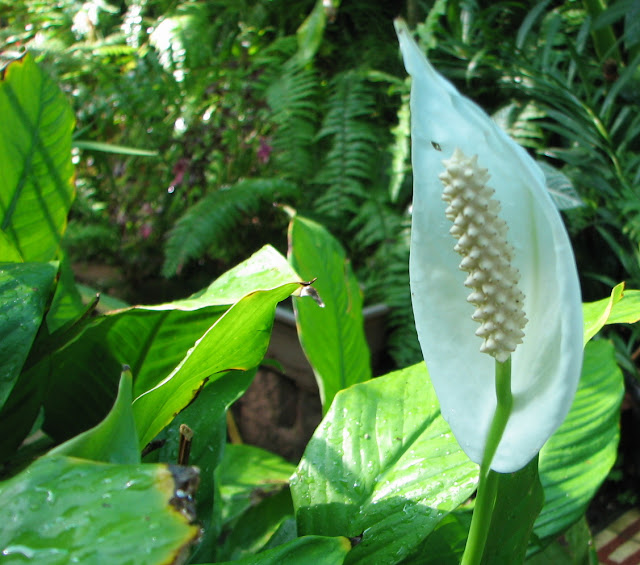 There are still a few Spathiphyllum spathes to be seen, 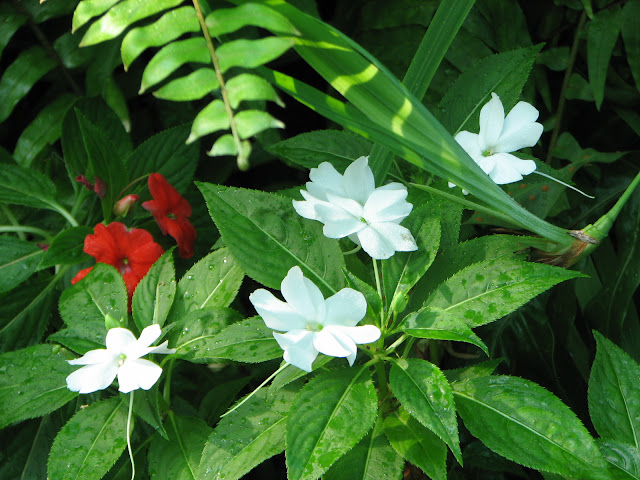 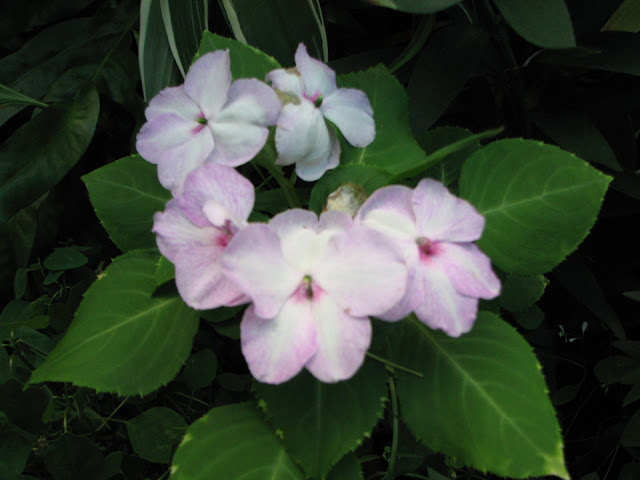 and a few flowers on the Impatiens hawkeri and Impatiens balsamina, if you look very closely. 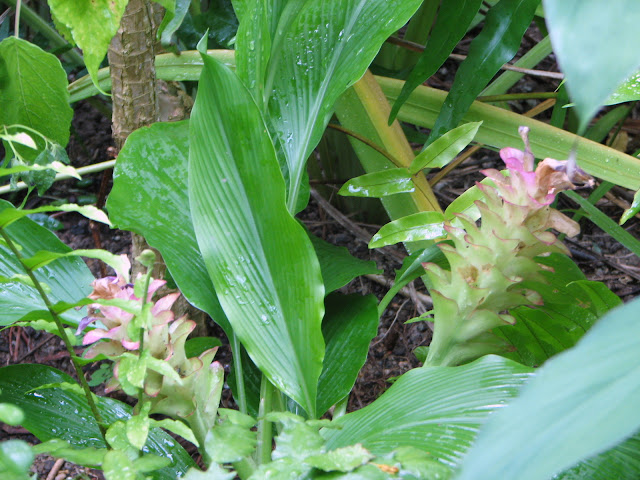 Then there are the dying blooms of the Curcuma australasica 'Anita', 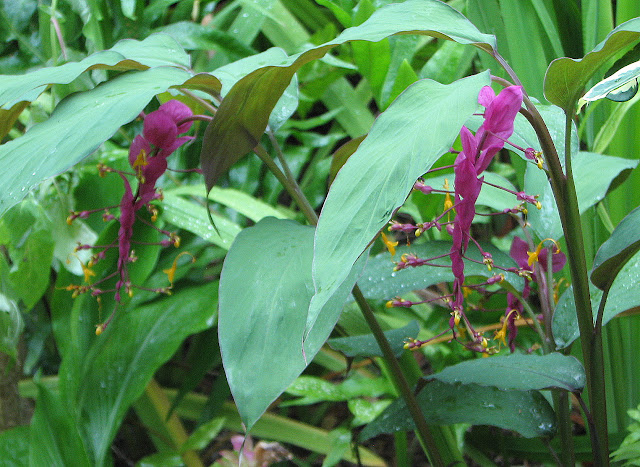 and the newly opened pendulous flowers of the Globba winitti or Mauve Dancing Ladies.

Out in the tiered front garden beds, the young Lagerstroemia indica or Crepe Myrtles have been blooming for the first time, 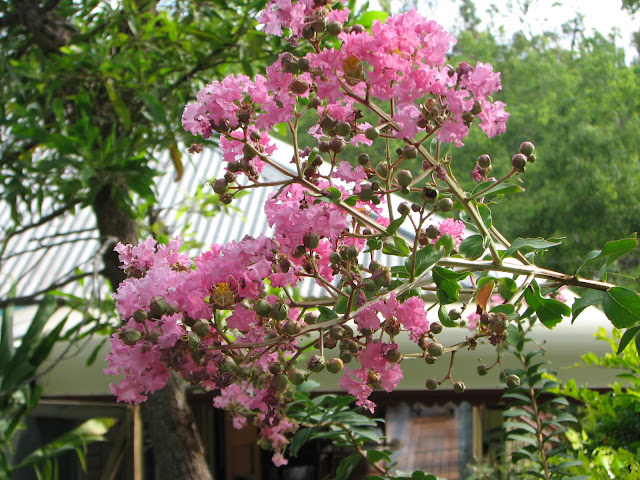 and a few of the Hemerocallis are still blooming, including ... 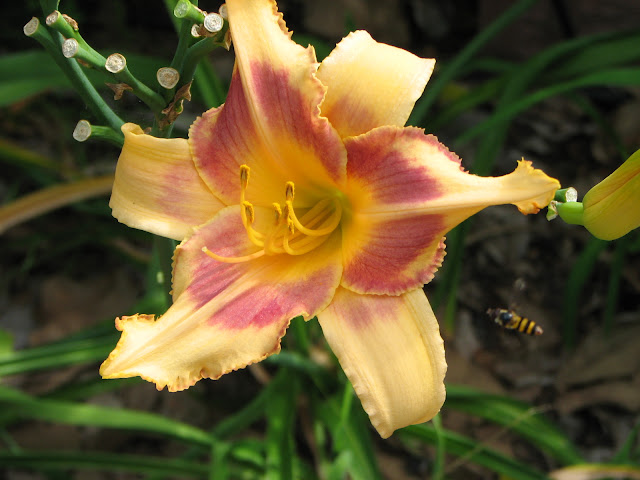 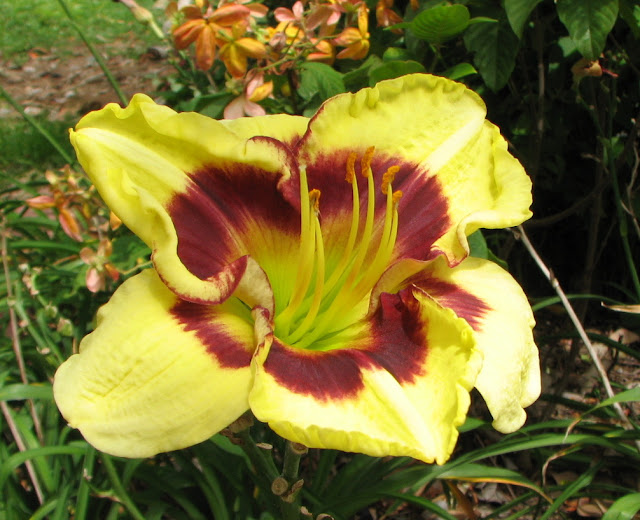 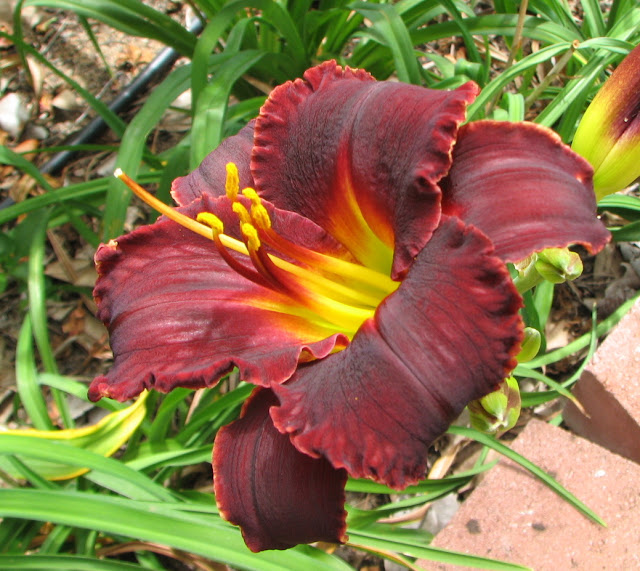 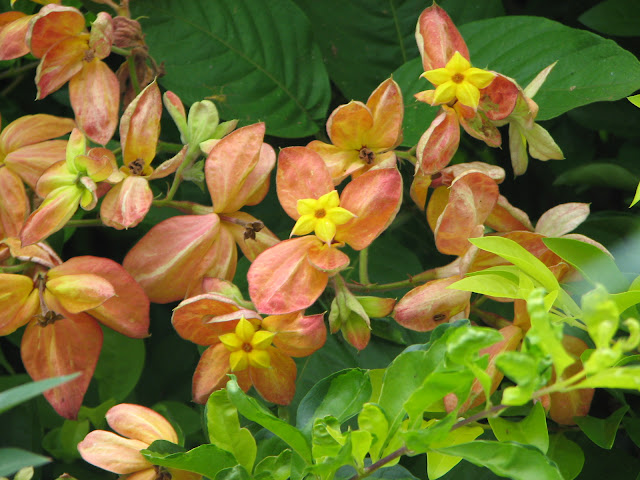 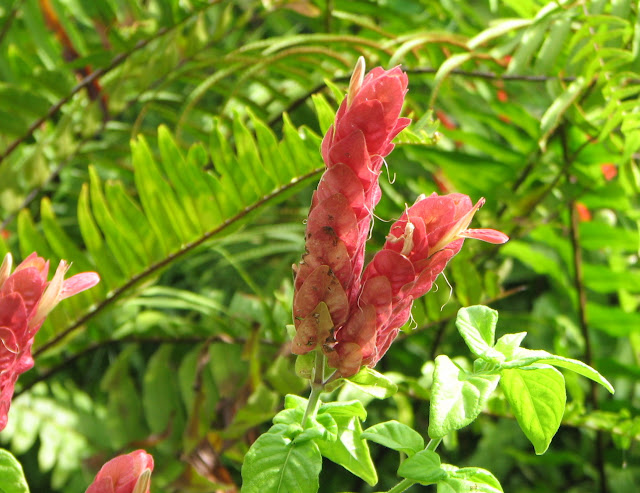 and there remains a few blooms on the Justicia brandegeeana.

Elsewhere around my place, 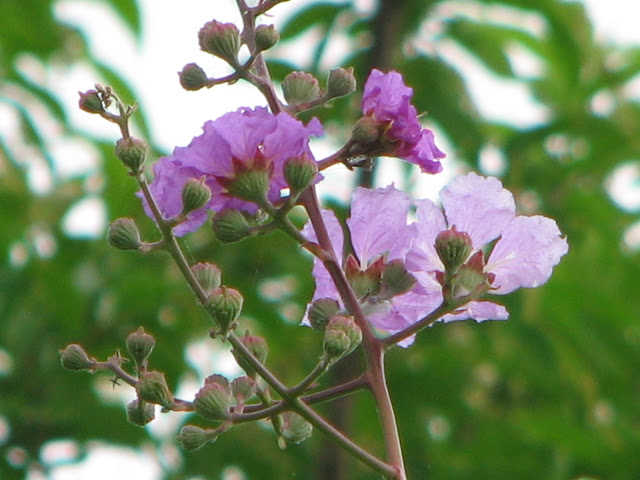 there are a couple of Lagerstroemia indicas or Queen's Myrtles that have just started their blooming. 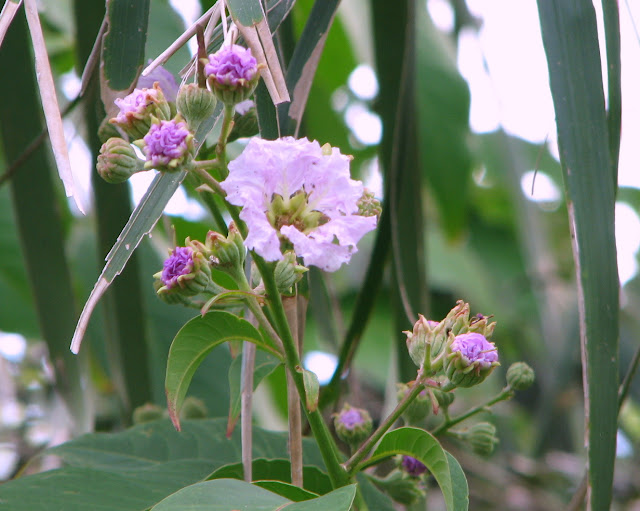 There are so many buds on these trees, but they seem to be taking their own sweet time in opening.  They've been sitting atop one of the trees in particular for a couple of weeks now.  Hopefully soon they will all open up and put on a pretty display.

and Flowers On Saturday 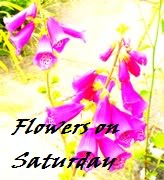