Mosaic Monday ... It's Beginning To Look A Lot Like A Tropical Christmas!

Not far to go now!  Of course, my grandchildren have it figured out in terms of the number of sleeps ... only 20 more to go!!

Here in my north-eastern corner of tropical Australia, it's time to get in the Christmas mood. 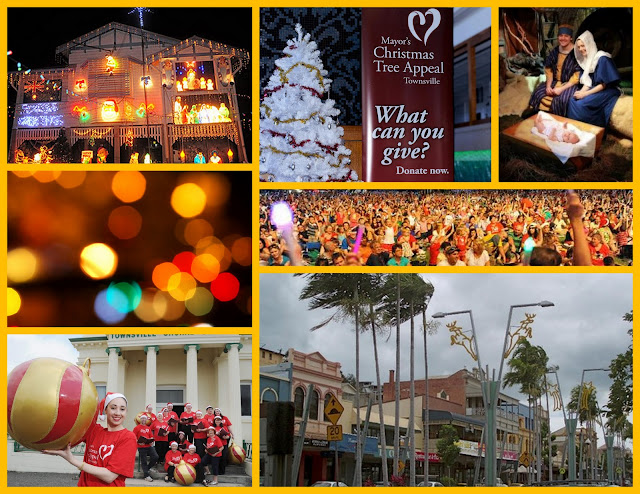 People decorate their houses and yards for the annual 'Street Light Drive'.  Every year we get in our cars, turn on the local radio station and are directed down particular streets so we can enjoy the fabulous light display. 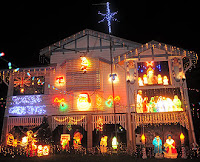 The house featured in the mosaic is the best known house ... the McGregor's house.  They've been decorating their house for many, many years ... well ever since I first moved here over thirty years ago.

The Mayor has the annual 'Mayor's Christmas Tree Appeal'.  This allows for cash, gift and food donations to be left under the Christmas tree at the Town Council Office and various other locations around the city.  All these donations are then passed on to those who are not so fortunate through various community organisations.  The target this year is at least $100,000.  The city residents usually meet the target and then some. 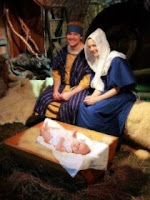 Our city also hosts 'Stable On The Strand'.  For the five days before Christmas, one of the parks along our ocean front boulevard is transformed into the town of Bethlehem complete with Roman soldiers, traditional craftspeople, livestock, shepherds and of course Mary, Joseph and baby Jesus.  This interactive re-telling of the traditional Christmas story is free for all.  2011 is the tenth anniversary of this fabulous community celebration.

There are also several locations around our city that host Carols By Candlelight, although sometimes that can be touch and go according to the weather.  The largest gathering, which was scheduled for this Sunday, has had to be cancelled because of the weather forecast which has predicted thunderstorms and more heavy rain.  It will hopefully happen the following weekend now. 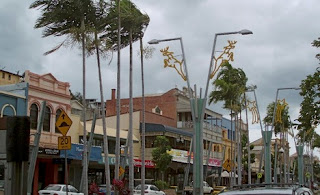 Our major city streets are always livened up with huge Christmas street decorations.  You can see how these are all attached to the tall street lights.

I thought I would end the post today with a popular photo titled 'Aussie Christmas Wreath'!  Gotta love it! 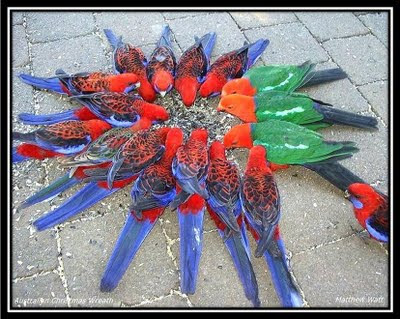 (Photo was originally taken by Matthew Watt back in 2006 , but has been doing the rounds thanks to Google images ever since!  Here's the link to the original shot Australian Christmas Wreath) 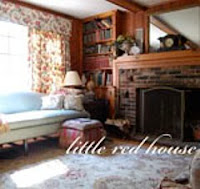