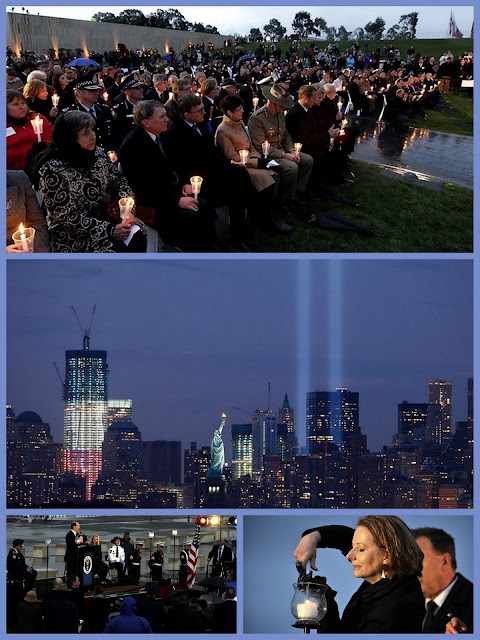 A commemorative service was held in our nation's capital, Canberra, yesterday evening.  Our Prime Minister, Julia Gillard, joined the United States Ambassador to Australia, Jeffrey Bleich, at a twilight ceremony to remember the September 11 attacks and to honour the victims of that terrible day.

The Australians who perished


Ten Australians are known to have died in the September 11, 2001 terrorist attacks in the US.

( from NEW SOUTH WALES)
- Alberto Dominguez, 66, from Lidcombe. A Qantas baggage handler on holidays who was on board
American Airlines Flight 11 which crashed into the World Trade Centre (WTC) in New York.

- Yvonne Kennedy, 62, from Sydney, who was on American Airlines Flight 77 that crashed into the
Pentagon in Washington.

- Craig Neil Gibson, 37, from Randwick in Sydney, who was working on 94th floor of the WTC north
tower in the offices of insurers Marsh and McLennan.

- Steve Tompsett, 39, from Merrylands, NSW, who was in the WTC north tower.

- Elisa Ferraina, 27, from Sydney. She was born in Australia, but had just taken out UK citizenship.
She was on the 106th floor of the WTC north tower.

- Leanne Whiteside, 31, a lawyer from Melbourne who was in the WTC south tower.

- Peter Gyulavary, 44, was born in Geelong, Victoria but had moved to the US 20 years ago. He was
working on the 91st floor of the WTC south tower.


- Andrew Knox, 29, from Adelaide was working with a building construction company on the 103rd
floor of the WTC north tower.

- Kevin Dennis, 43, was originally from the Gold Coast, but had become a US-based stock broker with
Cantor Fitzgerald and was working on the 101st floor of WTC north tower. 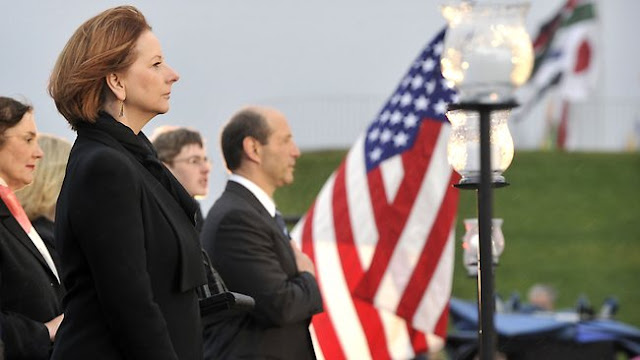 Our Australian Prime Minister, Julia Gillard with the US Ambassador to Australia Jeffery Bleich during a remembrance day service for the 10th anniversary of the 9/11 attacks held in Canberra on September 11, 2011.

(This photos is taken from The Telegraph Newspaper and credit given to AFP PHOTO / Mark GRAHAM  Source: AFP)

That's the number of Australian soliders (we call them 'Diggers') killed in the war in Afghanistan, which is of course inextricably linked to that fateful day in September.  We will remember them  ... 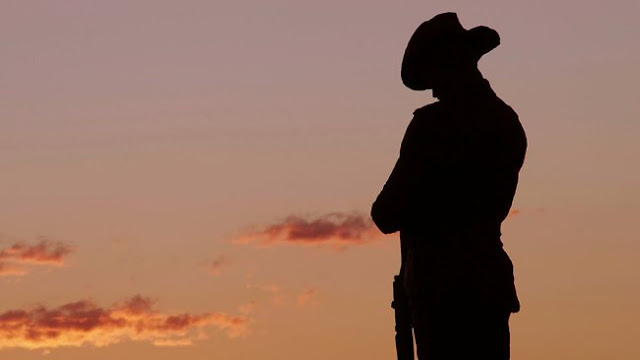 ...  and we will not forget all the Diggers who are in harm's way right now over there in Afghanistan.
My city here in north Queensland is a garrison city and is home to a major Australian Army base, Lavarack Barracks.  My school has many defence families and there are quite a few of our students with one or both parents overseas in Afghanistan.  We deeply respect the sacrifices made by these brave men and women.

I'm joining Mosaic Monday  with this post today.  Do click on the link and have a look at all the fantastic mosaic posts.