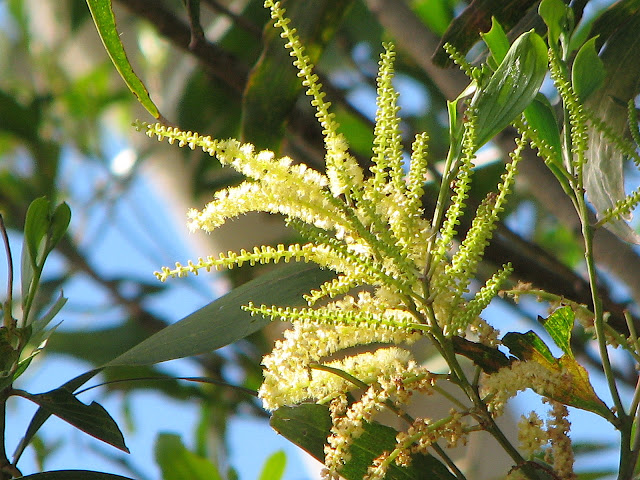 May is the last month of our Autumn and the Acacias have started their dry season blooming.  Already there's a further little drop in our daytime temps (expected high of only 27 deg C / 80 deg F today) and the nights are certainly getting cooler.  Last night was a lovely 17 deg C / 62 F.

On the garden front, not much has changed from my last Flower Flaunt post.  Pretty much the same things are flowering.  Unfortunately my back and neck had a little disagreement with the job I tried, and seized up!  So that's resulted in a further delay in potting up the annual seedlings.  So the courtyard remains bare of that potted colour.

Never mind, there have been just a couple of new blooms.  My one and only surviving Ivy-Leaved Pelargonium is showing some lovely flowers.  All the others succumbed to the unrelenting wet season and withered away to nothing.  So this particular Pellie is obviously made of hardy stock. 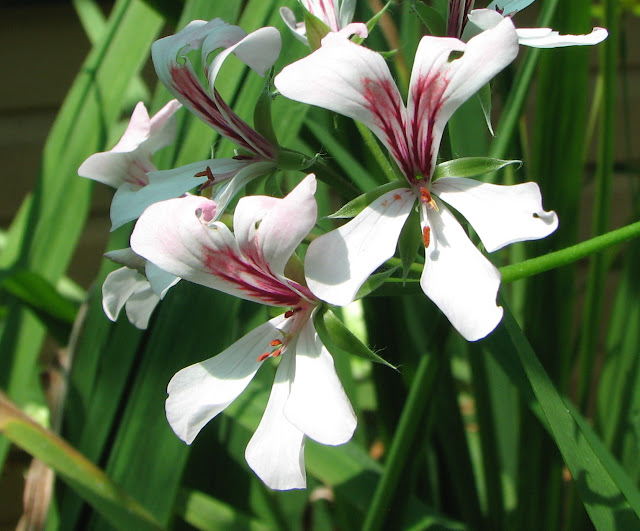 The Calliandra that only had to be trimmed back a little after the cyclone has also started flowering.  So we're beginning to see these lovely fluffy red Powder Puff blooms again.  We won't be seeing the pink Calliandra blooms for quite a while as that shrub is still pretty much a stump at the moment. 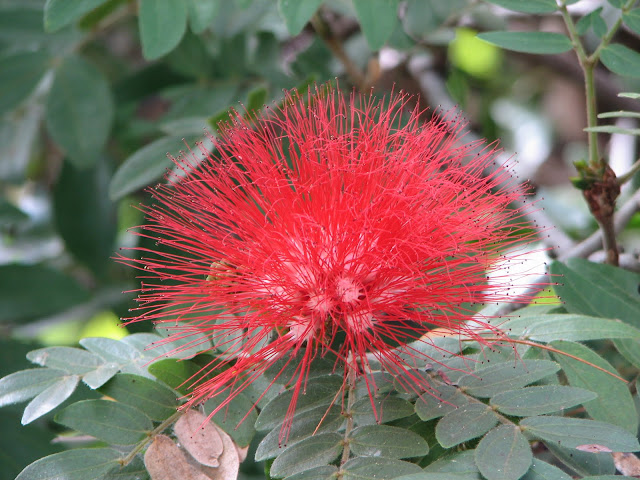 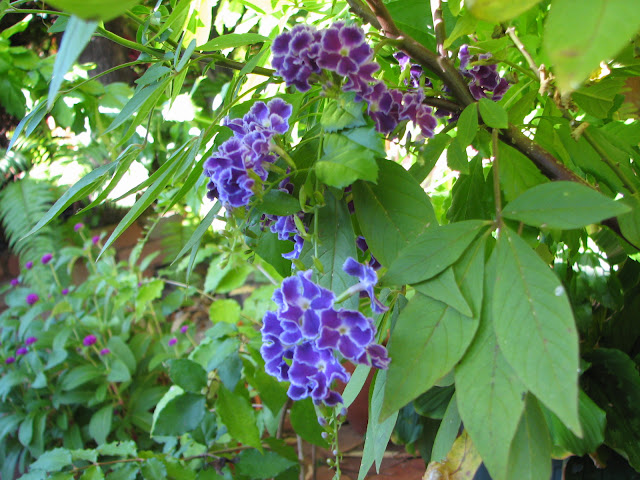 Duranta 'Geisha Girl' ... this Duranta, which is a potted plant on my courtyard, is the only Duranta flowering as all the others in the outdoor garden beds are still just stumps with bits of new growth sticking out here and there.

The Bachelor Buttons self-seeded in this container, so I'm very pleased with them.  These brand new plants have just begun their flowering. 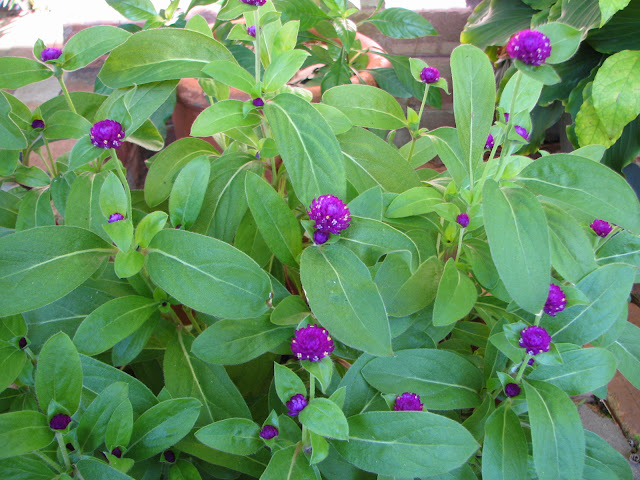 My dwarf white Salvia is putting on a pretty display and showing more and more spires every day. 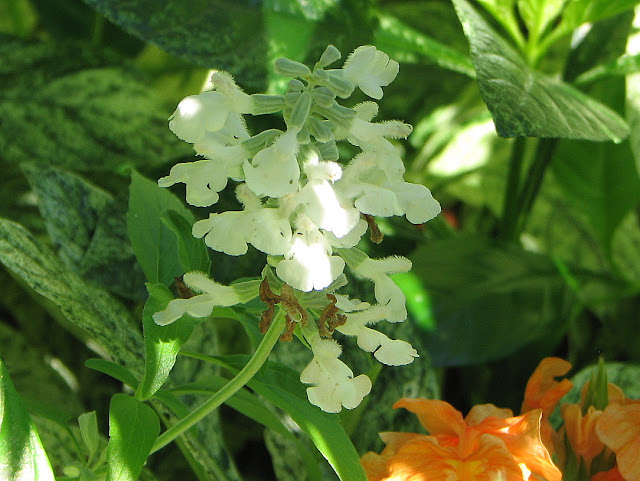 I have a few Spathiphyllums scattered in little corners of the garden, and one of the potted Peace Lilies has just thrown out its first spathe.  It will, of course, unfold soon to reveal the flower inside. 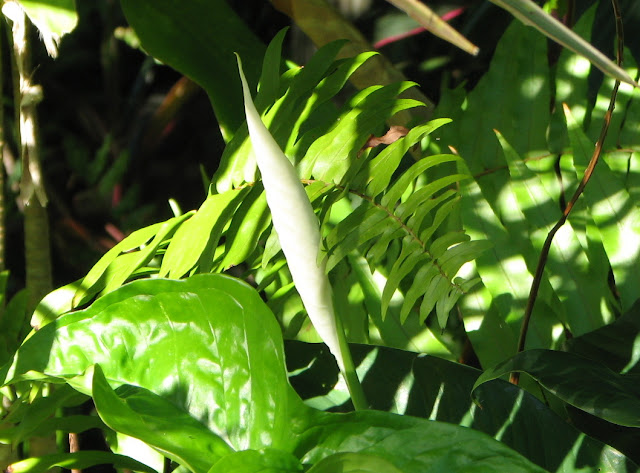 I've spotted the first ever flower spray on my Palm Lily, which is a native of the north of Australia.  I'm eager to see the flowers and I have to congratulate this poor plant on its' effort.  After being munched on by hordes of grasshoppers and then whipped mercilessly by cyclonic winds, the last thing I expected it to do was flower!!! 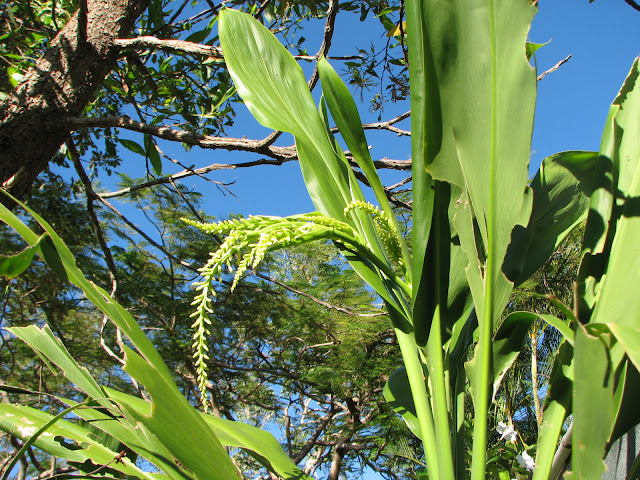 I've always very pleased to see these intricate beauties.  This is the inflorescence and tiny flowers of the red Shrimp Plant. 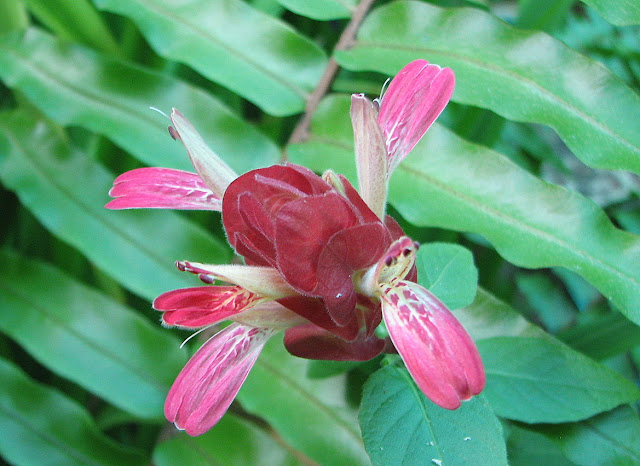 For lots more terrific Flaunt Your Flowers / Fertiliser Friday posts, go on over to visit Tootsie at Tootsie Time

Email ThisBlogThis!Share to TwitterShare to FacebookShare to Pinterest
Labels: Autumn in the garden, Flower Flaunt on Friday, Todays Flowers