Well Cyclone Yasi has been and gone. It crossed the coast as Category 5 (the highest rating for a cyclone) about 160 kilometres to the north of us. Yasi was huge … the eye alone was around 35 kilometres across.  The main part, including the eye, stretched close to 500 kilmetres wide!   We were within the circle of destructive winds just outside the eye or centre and we had a wild ride on Wednesday night/Thursday morning.

TC Yasi superimposed on the U.S. ... gives a visual about just what a monster it was! 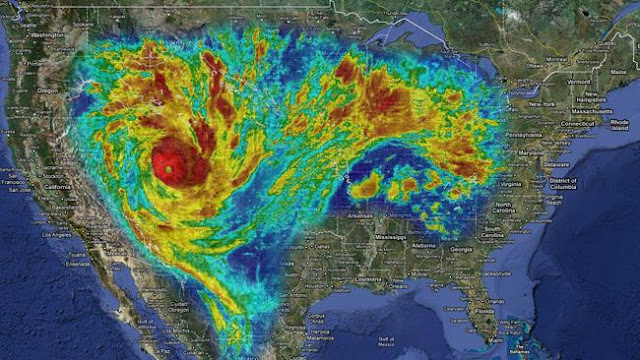 Here's some tips about weathering a cyclone:
1.  Have plenty of water supplies.  Fill the bathtub, fill huge 5 gallon water containers, fill any spare bottle you have around the house.  It's surprising just how much you will appreciate your efforts in storing water when there's no running water for days and days!  (Special note:  you'll need quite a bit of water to help flush the loo!!!!)  I recommend the 5 gallon containers as they're so much easier to heave around! 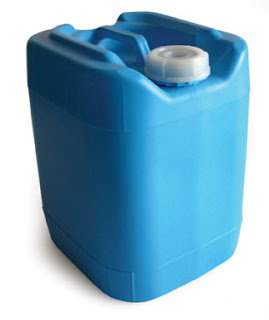 2.  Make sure you have a source of power such as a little generator.  It is so surprising just how boring and long the day can be when there's no power for your various modes of entertainment.  We've been without electricity now for four days and it feels like a lifetime.  I'm able to blog tonight because we took the chance to fire up the generator for a few hours instead of the hour in the morning and the hour in the evening that has been the routine for the last few days. 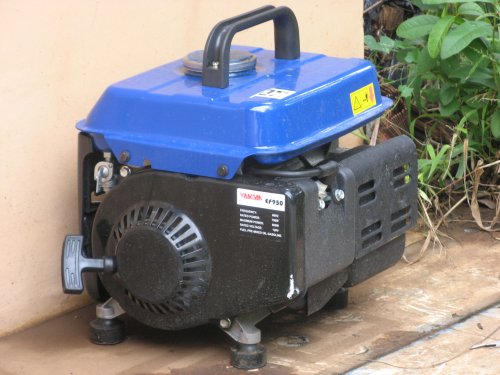 3.  Have plenty of dried and non-perishable food items in your pantry!  After an exhausting day of clearning dropped branches and dragging them metres to the fire-pit, the last thing you feel like doing is cooking up a huge meal on the barbeque at the end of the day!  It's soooo much easier just to boil some water and add it to something that resembles rice and then just chuck a steak on the barbie for some added sustenance. 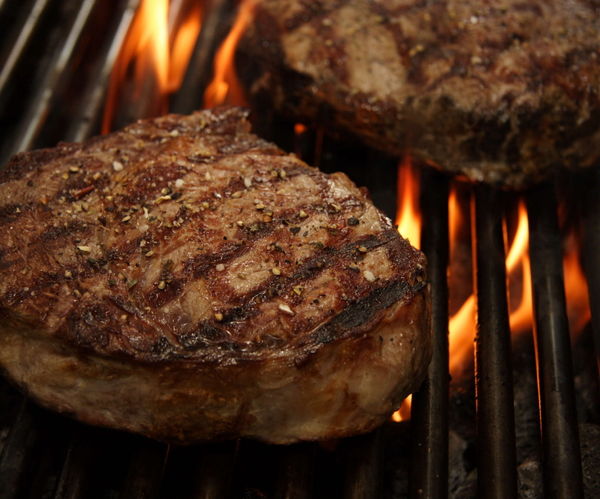 4.  Sit out the scary cyclonic winds with friends.  Stay out on the back verandah until you can't stand the rain and wind lashing anymore ... and the little branches flying past perhaps add a little bit of fright to the experience ... and make sure you have a wee drink or ten!  Left-over bottles of champagne from a mother-in-law's milestone birthday come in very, very handy!
(No, my friend is not trying to get internet access, she's just playing some music on her lap-top to lighten the mood.  Bob's 'Blowin In The Wind' is a great choice!) 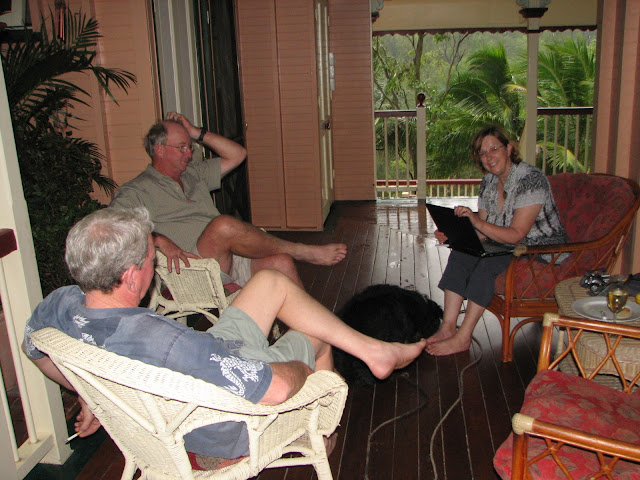 5.  Ensure that the battery-operated source of all knowledge about the cyclone and how it's progressively raging closer and closer to you comes from something cute and adorable.  The duck of doom was most appropriate as our one and only source of contact from the outside world in the wee small scary hours!  Pay homage to the duck of doom and bad things might be averted! 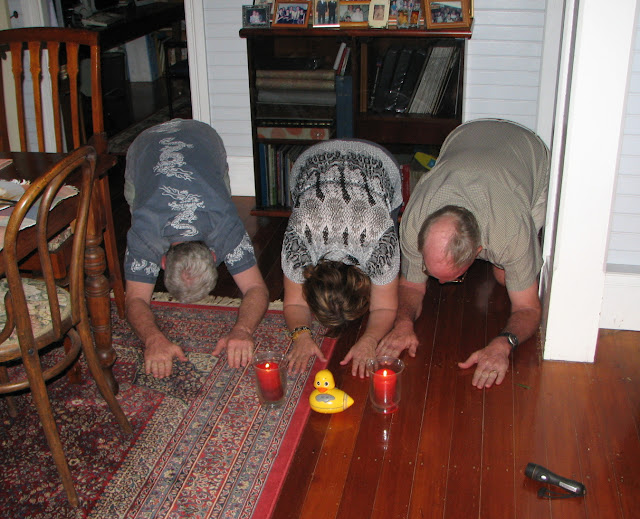 6.  On the night of the raging storm, make sure you cook loads of tasty food.  I highly recommend big pots of spaghetti ... quite easy to cook using a little portable stove when you lose power and spaghetti tastes great even when you're sitting in a dining room surrounded by what seems like a whole fleet of jet engines roaring all around you!  It also goes very well with lots of robust red wine! 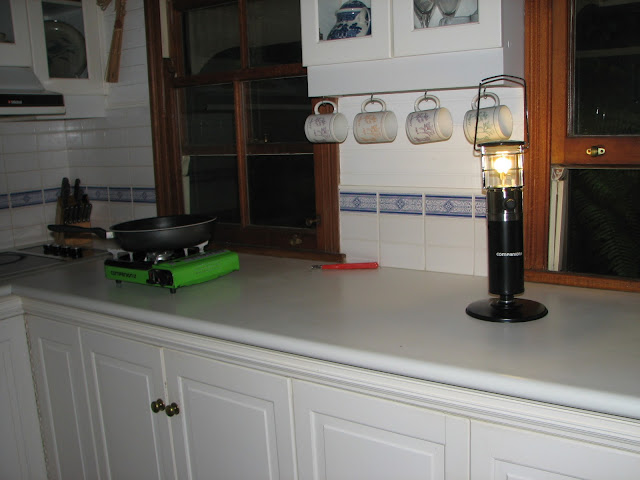 7.  When you hear some frightening clunks and crashes from outside don't whatever you do, try to go out to see what it was!  Your face will never recover from the wind and rain lashing it receives while you're being so inquisitive.  Far better just to wake up the next morning and take a wonderful stroll of discovery outside when you can actually stand up straight and walk! 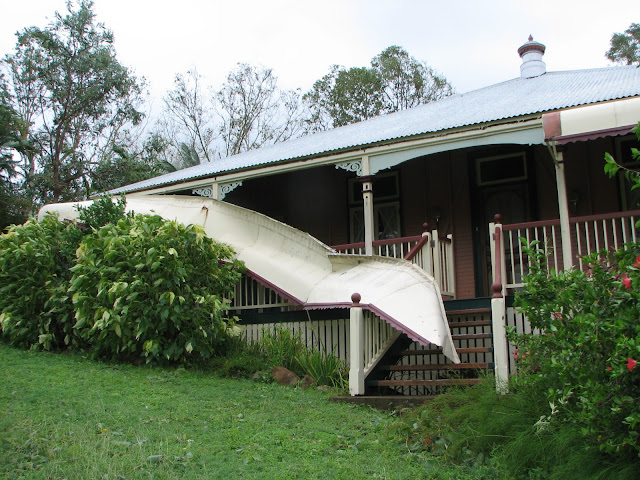 8.  Have plenty of fun board and card games to play ... Coon Can (also known as Gin Rummy) is a great one to play or Taboo!  It's something to keep your mind off the noise happening all around you.  It's also a great source of diversion when you find you just can't sleep! 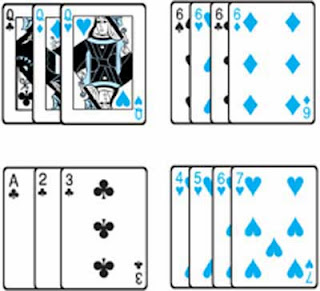 9.  Ensure you service your chain saw.  That will most certainly come in handy when it's time to cut down, trim back and just generally give your entire property a clean-up in the aftermath of some rather nasty windy weather!  Be prepared when you venture outdoors ... your garden will never quite look the same again! 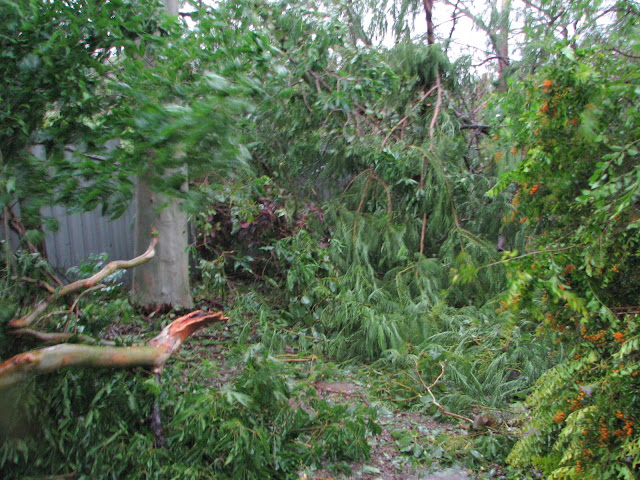 10.  Must-do's:
- have cash ... they just won't just give you stuff when you turn up to a shop that has no electiricty
- fill the fuel tanks in both your cars ... it's surprising just how much running around you have to do for elderly relatives in the aftermath of a cyclone
- constantly add to your collection of batteries ... make sure you have all the different types as you just might be surprised what sizes are needed for things like battery-operated radios and clocks
- tape all your windows ... even those you think are not in the direct path of cyclonic winds as it's amazing just how much pressure is created inside your house in the event of cyclonic winds
- finally, have a great sense of humour and a resilient nature ... it's very handy not to lose it when things start crashing into your house or falling off your house!

O.K. ... silly stuff over with now!  All is well here. We sustained some damage to the house … the bull-nosed hood that wraps around the verandah had a section ripped off and there were a couple of smahed windows. Aside from that the house came through OK.

There was no torrential downpour with the cyclonic winds and I think that helped Townsville come through relatively unscathed. The winds apparently reached aorund 125-130 kms an hour here … it certainly felt like it! … but without the heavy rain the damage around our city appears to be quite minor. 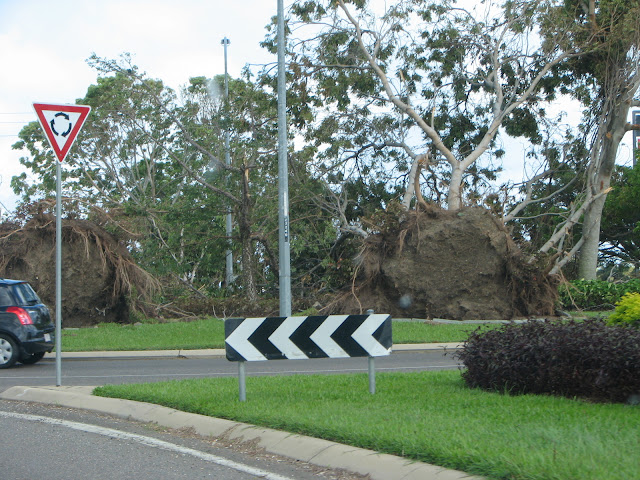 There are thousands of trees down all around the city and many of them bought down powerlines. There’s still around 60,000 homes without power today … we’re one of those … and for some of us the lack of power also means there’s no running water. There’s no electricity to power the water pumping station.

So right now, we’re cooking on the barbie, using the generator for a few hours in the morning and at night, and using our water sparingly. I expect we’ll be one of the last suburbs to have the power restored as I’m afraid the outlying rural suburbs are not areas of priority.

Compared to those poor souls up in Mission Beach, Cardwell and Tully though, we’ve been very lucky. They have really suffered and they were just getting back on their feet after Cyclone Larry wiped through there a couple of years ago. The weather has remained relatively clear so that certainly helps with the clean-up and the repair crews are hard at work.

Our property here is covered with such a lot of debris from broken branches and fallen trees … we’ve been busy trying to clear a way out of the property as the driveway was impassable. It took almost an entire day, but the driveway is now cleared and we’ve started work on cleaning up the rest of the place. It will take a while, but we’re so thankful that’s the worst of it! 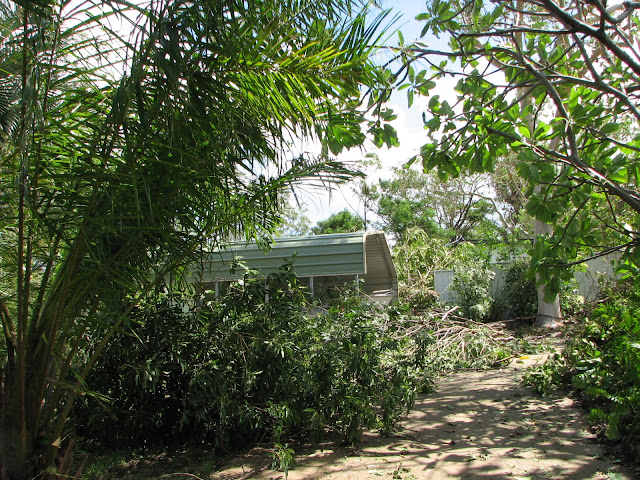 We’ve lost the tops off our two 30 feet tall Tabebuias, and our huge 30 feet by 30 feet Weeping Fig Tree … these trees are all located close together and the mess left by the branches ripped off is just massive.

Our 10 foot African Tulip Tree has falllen over completely and unfortunately taken out a fence panel. We also had the 30 foot Tabebuia from next door crash over another of our fence panels.

Next door’s Poinciana took out a number of tall trees down our driveway and many of the 8 feet Duranta shrubs were torn apart. Of course, we’re surrounded by gum trees our in the bushland and lots of broken branches ended up littered across our property. 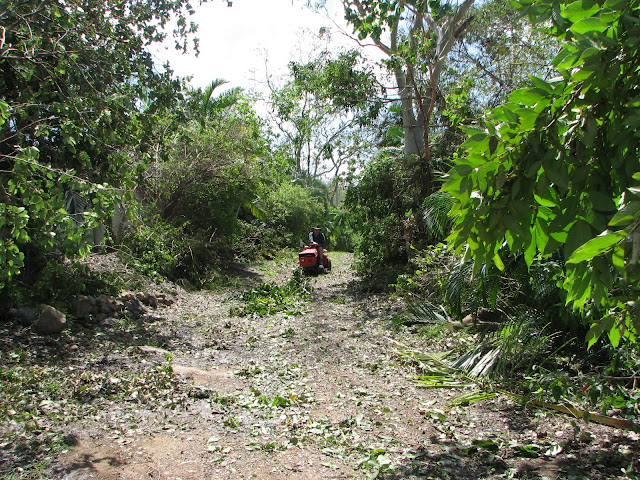 That's hubbie on his way back from dragging yet another huge load of debris to the what could be called our Mt. Everest pile!!  All in all the place does look a bit of a wreck, but that’s nothing compared to the devastation further north. We were lucky enough to dodge a rather massive bullet!
at 8:07 PM