‘Wet’ season here in northern Oz not only means heavy rainfall, but the possible occurrence of significant weather events like cyclones.

So far this ‘wet’ season we’ve had one Category 1 cyclone … Tropical Cyclone Tasha … which passed a little further north of us on Christmas Day morning. That cyclone deteriorated to a rain depression when it moved inland and went on to contribute significantly to the flooding experienced throughout central and southern Queensland.

Then on Monday this week, a borderline Category1/2 tropical cyclone, TC Anthony crossed the coast just south of us.  It made landfall in my home town where my Dad and brother still live.  Luckily there wasn't too much damage but they did experience 150 kilometre/hour winds and torrential rain.  Trees were squashed flat, caravans tossed around, some smashed windows ... but that was about the extent of the damage.

Well, today we're bracing ourselves for the arrival of possibly the largest tropical cyclone Queensland has experienced.  TC Yasi is on its way ... and it's a monster.  It will dump another massive amount of rain over Queensland as it deteriorates and moves inland ... and that is, of course, the last thing this state needs! 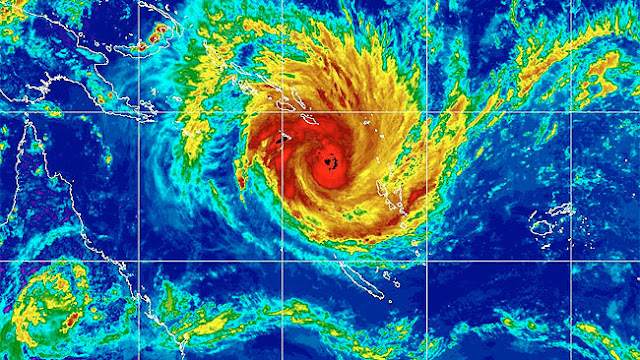 It's predicted to become a Category 4 just before it crosses the coast. Category 5 is the highest possible category for cyclones, this is going to be a bad one.  We've been closely watching it all day today and it's begun moving quite quickly towards the coast. No-one can be entirely certain where it might make landfall, but at the moment it's predicted to be further north, maybe up around Innisfail or Cairns.

It is however a huge system and we will definitely be affected. Nursing homes and one boarding school was evacuated yesterday ... and today most of the low-lying areas close to the coast have been warned to evacuate. There's a huge storm surge expected to hit Townsville and we will experience the outer edge of the destructive winds.

All schools are closed tomorrow and Thursday, so I get to stay at home. We have relatives living in the inner city who have been warned to evacuate so we'll be looking after them.  The supermarket shelves here are almost bare ... there's not a tin of Baked Beans or a roll of toilet paper to be found. On the way home from work this afternoon I saw incredibly long lines of cars waiting to fuel up at the petrol stations because we're expected to lose power for a while. People are queued at ATM's to get cash ... and there's not a battery to be found in this great city of ours!  I have to say too, lol, that there's not much wine or beer left in the bottle shops either!!! Typical for Aussies!

Ah ... the tropics! Anyone thinking of migrating for the wonderful weather??? Hmmm?
at 5:38 PM