Introducing a real garden and bushland treasure ... this is one of our native Australian bees.  It's found throughout most of Oz except for Tasmania and the Northern Territory ... not exactly sure why they don't like those two spots!!  This brightly coloured native bee is a very common sight in my garden though.

The Blue-Banded Bee ... Amegilla cingulata ... has iridescent blue on black bands all over the abdomen ... rather like a fancy waistcoat ... and it's head and thorax are covered in gold hairs.  Apparently the males have five blue bands while the females have only four!!! 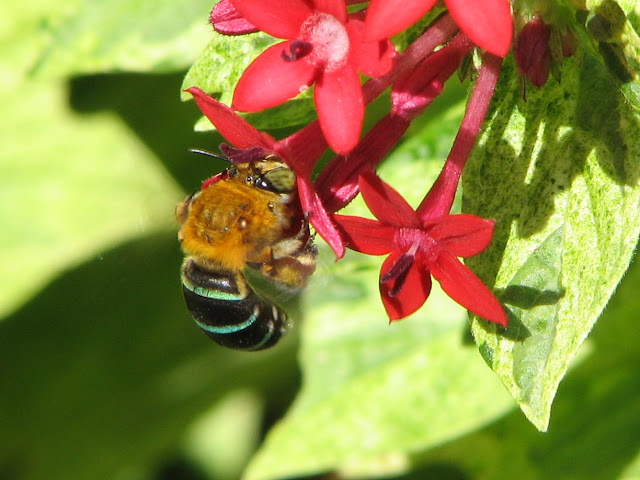 This bee is around 15 mm long and is a solitary bee.  Actually we have many hundreds of species of native bees that live solitary lives.  There are no Queens or Workers in solitary bee species ...  so you will see them all out there working hard on their own to collect pollen.

These bees will nest in tiny holes in the ground or in wood.  Each nest is built by one female ... although it's an interesting fact that the females have been known to build in the same location close to other nests.