The 'Wet' Season is Finally Over !!! Time Out In The Garden Can Begin.

Over the last year and a bit, I've been trying to create a more colourful garden space in the courtyard by adding lots of potted plants.  Unfortunately, after months of rain ... whether it be the torrential downpours of late summer or the constant and most unusual autumn showers we've been experiencing ... the Courtyard Garden was beginning to look like a rather scruffy distant relative.  You just know you should love them, but you can't get past the outward appearance! 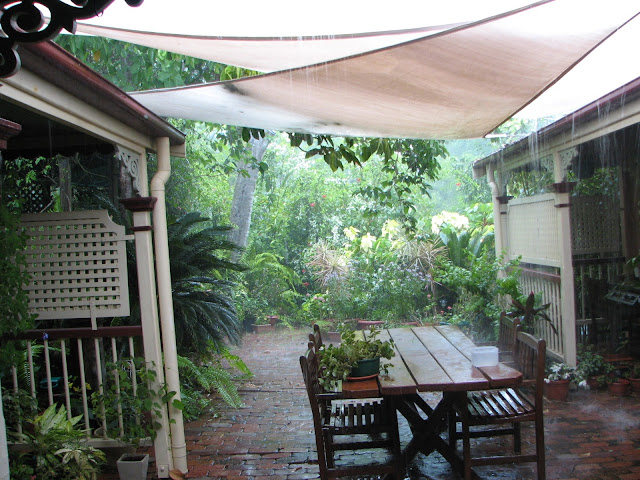 So it was time to look critically at my potted plants.  Time to move the aged or maimed out of sight for some intensive care ... and time to move the terminally ill to the bonfire pile.  Because my seedlings had not survived the endless weeks of damp, moist conditions and dull, overcast skies, it was also time to treat myself to some new annual seedlings from the nursery. Definitely time to re-pot any plants that have roots growing out of drainage holes in the bottom of the pot ... and if roots have grown down into the paving, it was time to cut them off and raise the pot up on pot feet.

Many plants are now craving some strong sunlight, while others needed some pest management measures. It was definitely time for action.  Out I went and started pulling out all the potted plants so I could get a decent look and see just how they were faring! 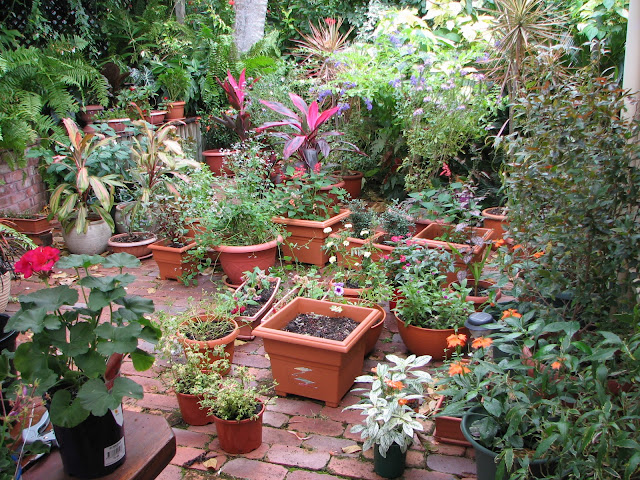 So what did I find?:
Plants like the Cockscomb really needed some sunshine ... we've had far too many overcast days over the last three months.  I'm going to have to find another spot away from the courtyard for these to get a decent dose of rays. 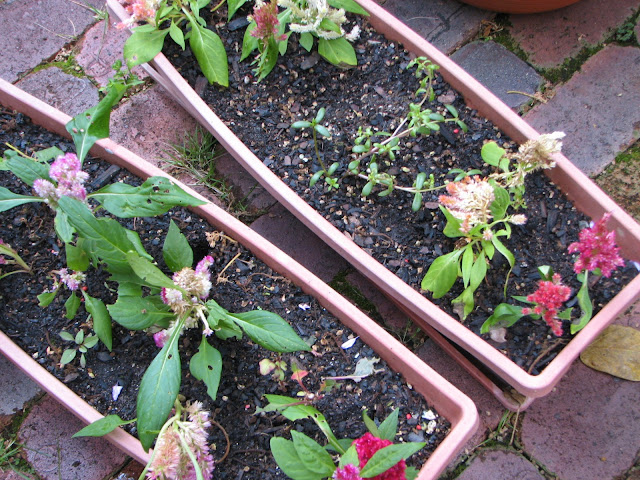 All my Portulacas ... Sun Jewels, as we call them .... also needed a healthy dose of Mr. Sunshine. 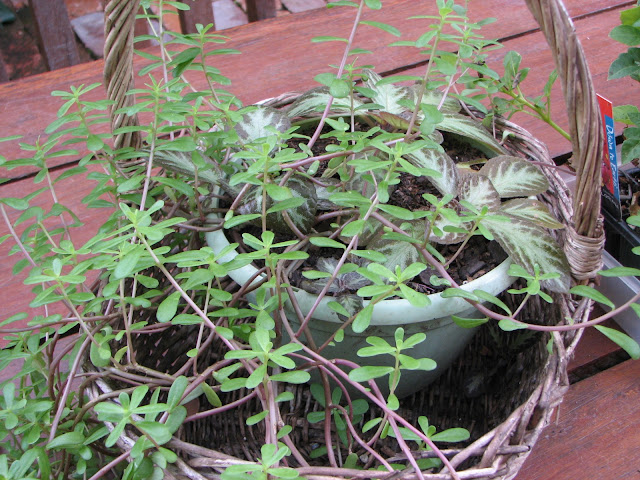 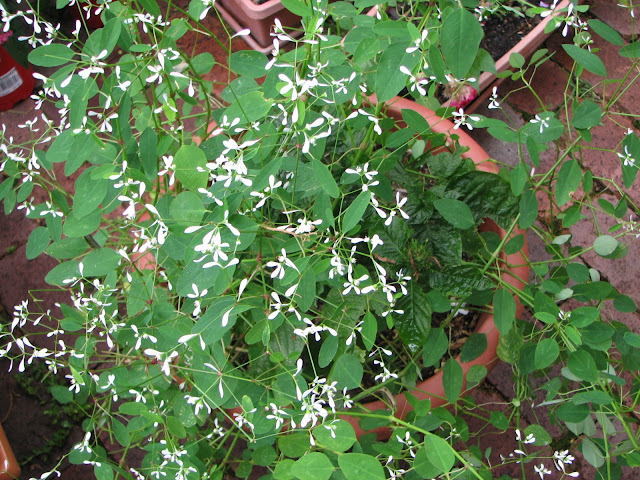 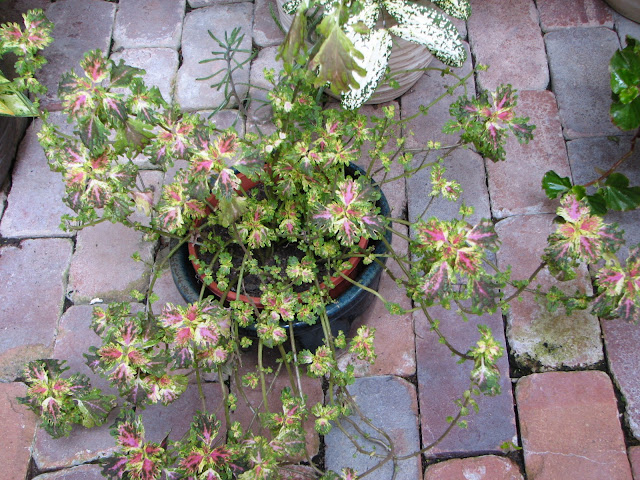 As a matter of fact this whole area outside my kitchen window needs some attention. 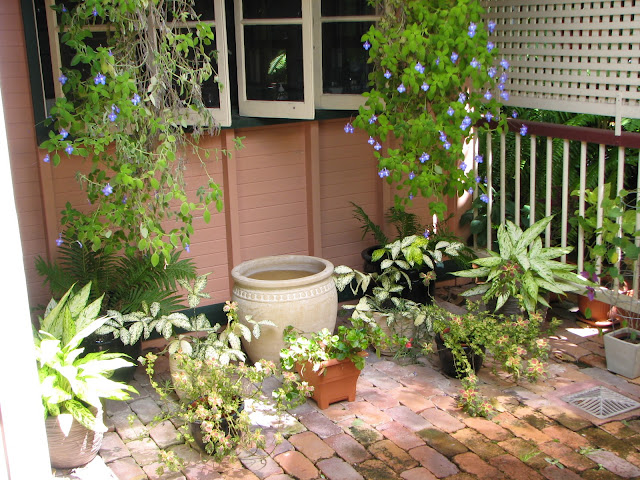 The stunning coleus that had been in the large white pot had been attacked by nasty little critters and had given up.  The Streptocarpus on the left hand side really suffered because the drip irrigation that waters it had broken and, as I was never home when it was on, I failed to notice anything was wrong until the plant started to look half-dead.

There's also way too much green in the spot and it definitely needs a lift.  It needs other colours!

The area on the other side, outside our bedroom came through well, but needed some colour as well.  Both areas need bright colourful plants that survive shady spots. 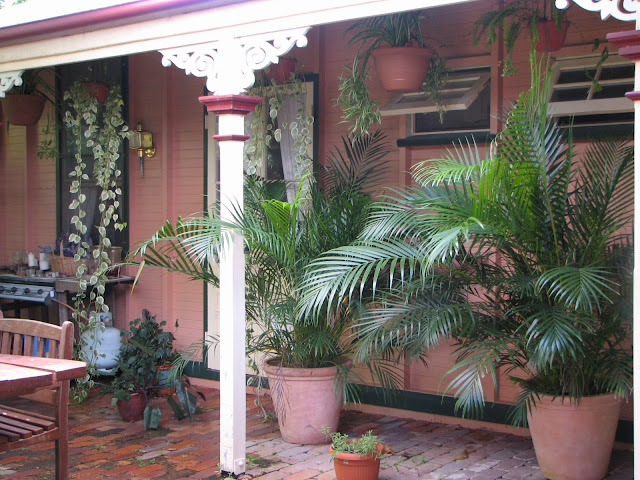 Hmmmm!!  Choices to be made .... more coleus, more cordylines, more begonias ... another trip to the nursery will be a priority.

The poor cordylines that were already out in the courtyard suffered horribly from those greedy grasshoppers ... not much that can be done about that.  They will, of course, grow lovely new leaves ... but in the meantime they will look less than their best. 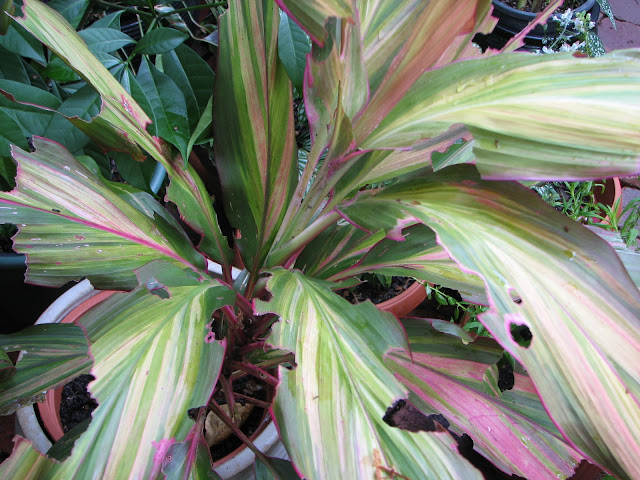 My gorgeous new Salvia ... Salvia guaranitica 'Black and Blue' ... had survived the 'wet' but had also been attacked by some little muncher!  Still it's now full of blooms so I'm quite happy with it. 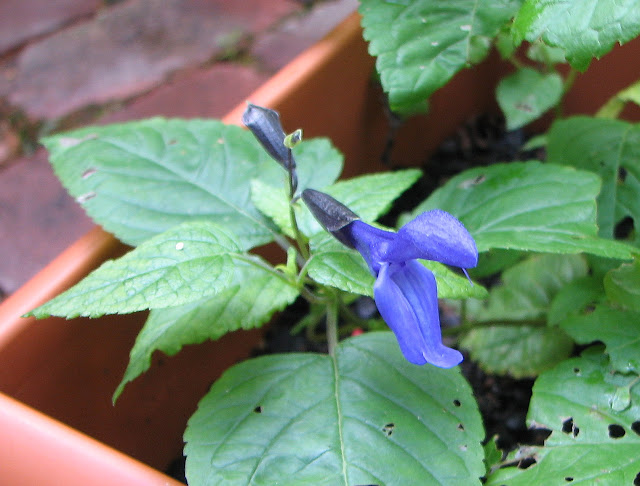 Both my Cleome spinosas 'Senorita Rosalita' were covered in blooms too, but they were also covered in mealy bugs and needed some TLC. 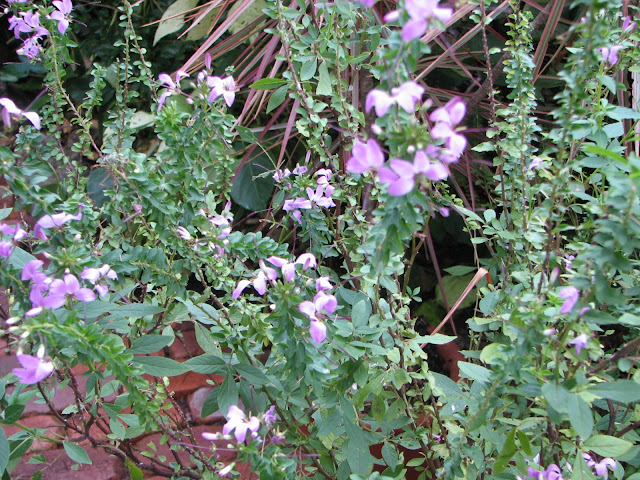 On a more positive note ... the Diffenbachia are thriving. 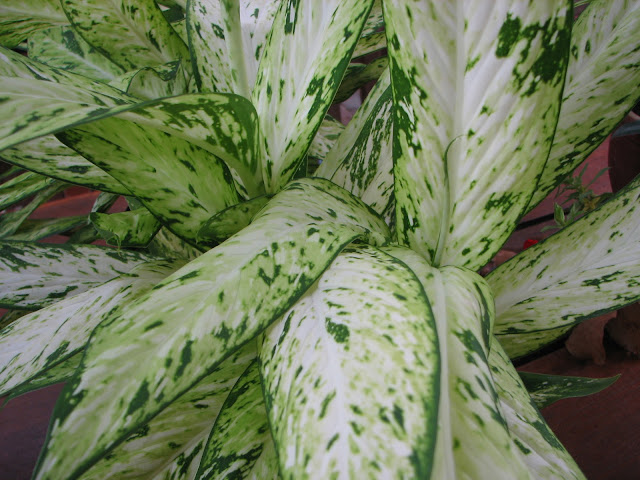 The Crossandras are flowering so well again ... 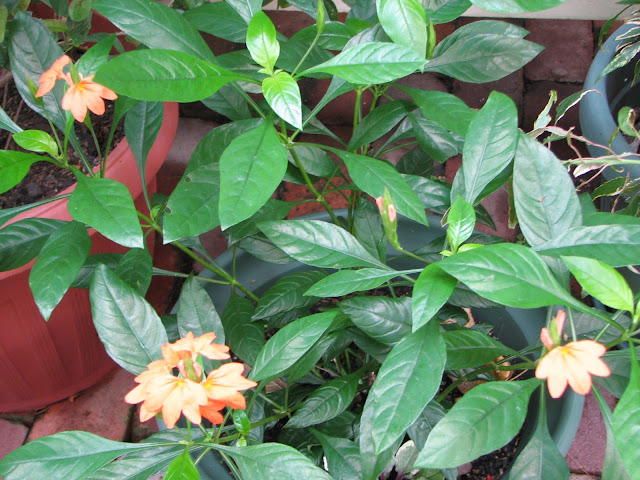 So are the Salvia splendens .... 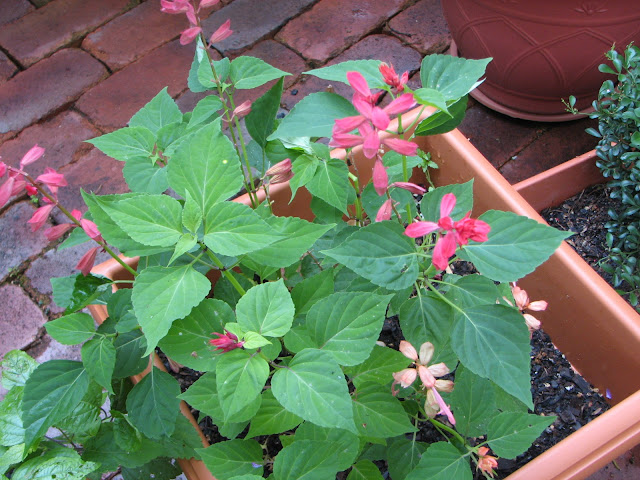 The Jacobinia have survived and continue to flourish.... 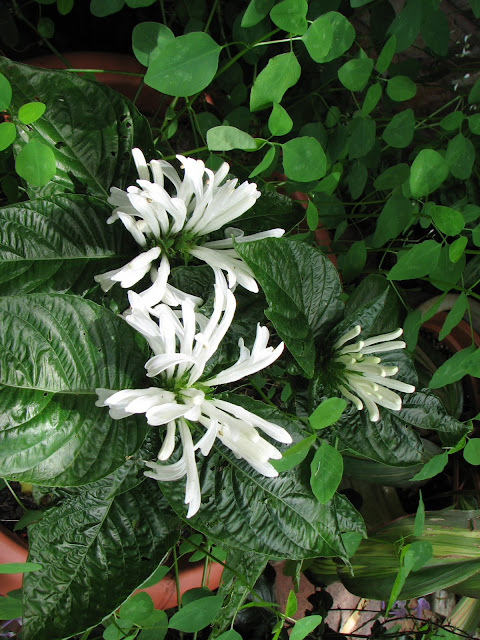 The Bracteantha (also known as Helichrysum) or Paper Daisies, grown from last year's seeds, are beginning to bloom ... 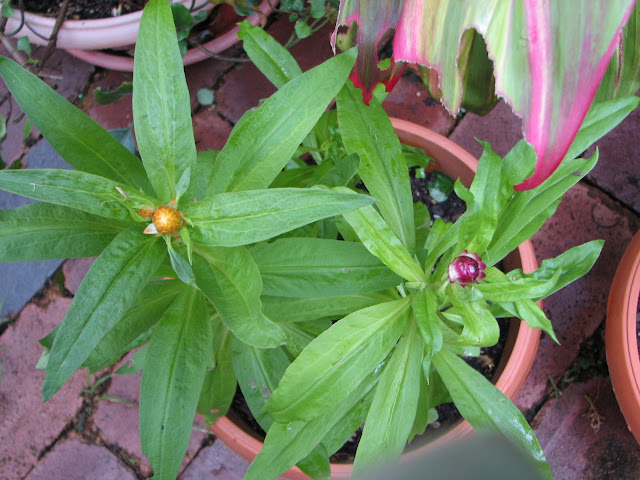 Then there is the forgotten tub that had Amaranthus growing in it.  The Amaranthus had died ... the pot hidden behind others and never given another thought during all the rain.  Well now ... there's new growth! 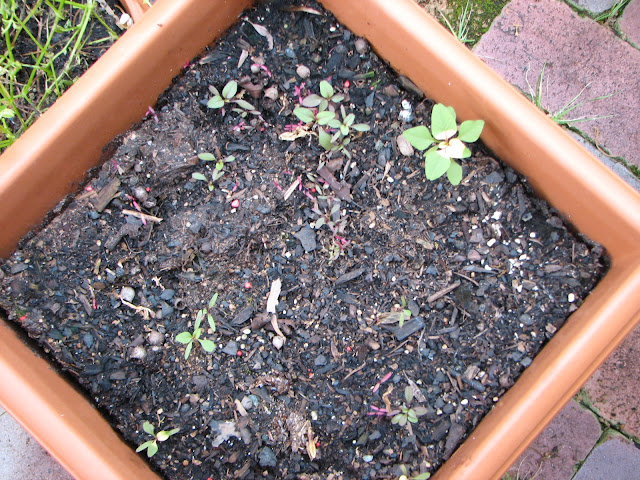 So there's some good after quite a long 'wet' season ... 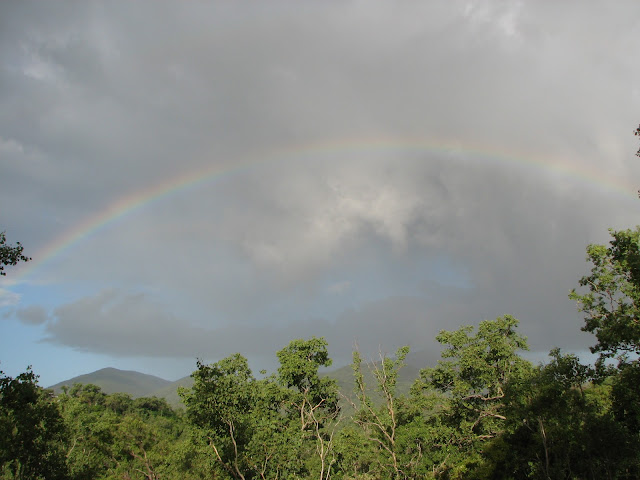 ... and now the recoup and recover session has begun.  I've started rearranging the newly potted annual seedlings, the re-potted favourites and the brand new colourful additions to create a far more attractive vista.  But it's time to get back out there ... so the rest of the story will have to wait. 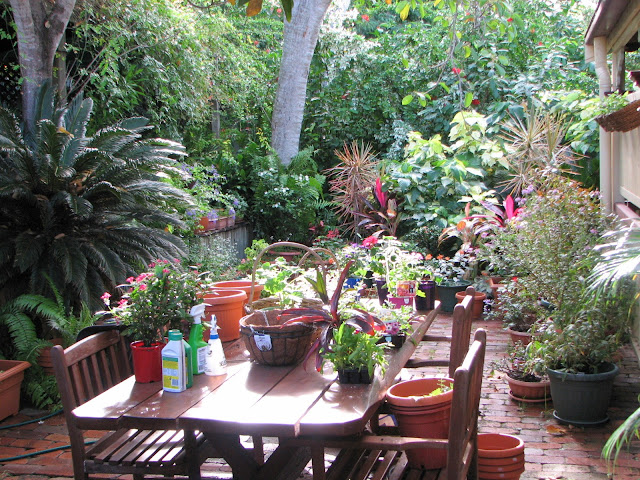 Email ThisBlogThis!Share to TwitterShare to FacebookShare to Pinterest
Labels: Autumn in the garden, Courtyard garden