'Ului' turned out to be a bit of a gentleman!

Well, cyclone 'Ului' made landfall at around 1.30 am this morning (March 21st) and the outcome has been relatively good.  'Ului' crossed our coast around 230 kilometres away from where I live ... Townsville. 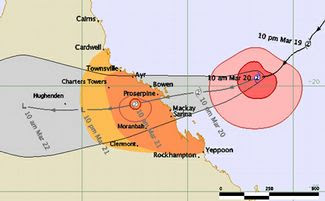 We have had very little rain and just a few patches of wind gusts ... so we got off scott-free! It's mostly been very, very still here ... which is what we expect when a cyclone is approaching, but not what we expect when it's close by. It's been a little eerie!  We're not sure whether we're going to get more rain and wind or if that's that!

Unfortunately my Dad lives a little further south, in Bowen, and that area was just within the heart of the cyclone ... that's the red part of the diagram above.  He lives only 50 kilometres away from where the centre of the cyclone's 'eye' hit .... so my hometown experienced wind gusts around 200 kilometres an hour.

My poor 'ole Dad said he could hear the roof lifting  ... the noise of the wind was apparently ear-splitingly loud!!  They lost power down there as soon as the 'eye' hit and it hasn't come back on yet ... and it's now over 10 hours later!   They experienced torrential rain and it's still raining ... there are lots of trees that have fallen down and power lines are down ... 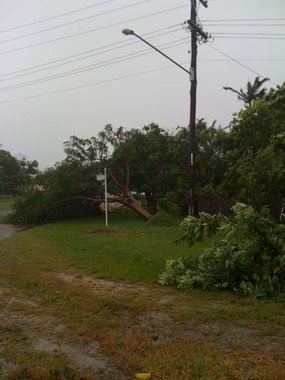 ... but luckily no deaths or casualties have been reported. They still can't leave their houses yet ... too much debris around.

There are reports of homes damaged, boats washed ashore, trees down and 60,000 homes without power, 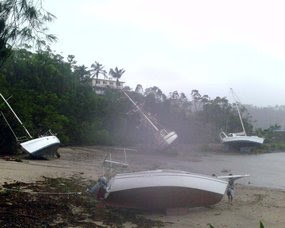 but all in all ... 'Ului' turned out to be a bit of a gentleman.  He behaved quite well - given the fact that he was a Category 3 cyclone when he crossed the coast!   He only caused moderate damage ... well moderate damage for our corner of the world anyway!

The Emergency Services and Disaster Relief Authorities credit the locals with being so well prepared that it helped create a positive outcome for this event.
at 3:47 PM