I was asked last week what is the difference between wallabies and kangaroos.  Well ... wallabies are included in the animal group called 'kangaroos'.  Kangaroos are part of the family Macropodidae, a group of marsupial mammals with huge hind feet. They range in size from tiny wallabies to enormous kangaroos, all with the same general body form.

Another difference between the two is their colouring.  A wallaby's coat is usually brighter with two or three differing colours, whilst the kangaroo's is far less spalshy and they tend to be all one colour .... like grey or brown.

If you want to be scientific about telling the difference, you'd have to get them to open up their mouths ... and look at their molars.  They eat their meals in different habitats ... so their teeth have evolved to suit their specific meal choices!

So following on from last Wednesday's post, I will show you the Eastern Grey Kangaroo which is a kangaroo quite common around north-eastern Queensland.  While I don't see them around my place here in the foothills, they can be seen roaming free in our city's animal sanctuary. 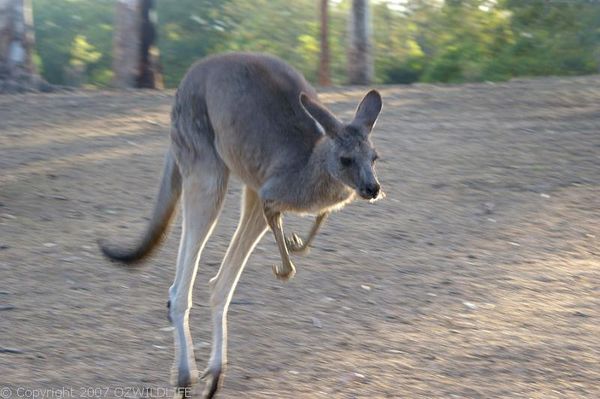 The Eastern Grey Kangaroo has uniform woolly grey-brown fur ... the fur is slightly darker on shoulders and in the middle of the back. The tail is tipped with black.

This is one of the younger Eastern Greys at the Sanctuary. 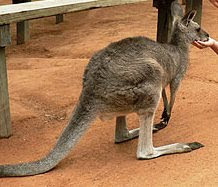