Today Is A Very Special Day ... Lest We Forget.

"The tumult and the shouting dies,
The Captains and the the Kings depart.
Still stands Thine ancient sacrifice
A humble and a contrite heart.
Lord God of Hosts, be with us yet
Lest we forget. Lest we forget." ~ Bradley 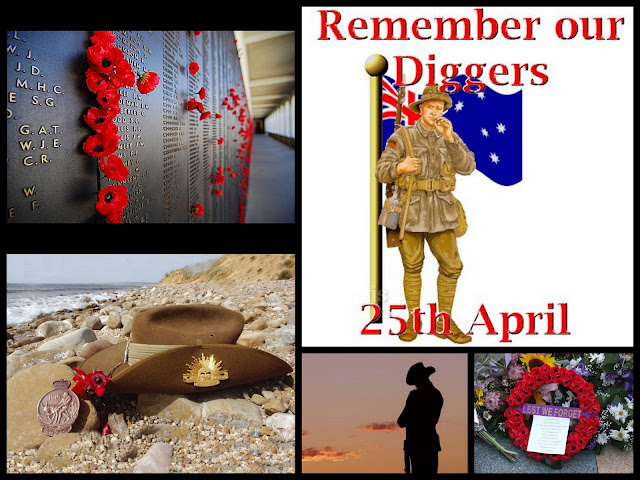 April 25th is known as ANZAC Day here in Australia.  It's the day our whole nation stops to remember and mark the anniversary of the first major military action fought by Australia and New Zealand.

The ANZACs - Australian and New Zealander Army Corps - landed at Gallipoli on April 25th, back in 1915, and so began an eight month military campaign that failed to achieve any of its objectives.  At the end of that campaign, the troops were evacuated with over 8,000 Australian soldiers killed during the long battle.  April 25th became the day that our country stops to remember the sacrifices made by all Australians who served and died in all wars and conflicts.

Townsville is a garrison city, home to one of Australia's largest defence communities.  The relocation of 3rd Battalion Royal Australian Regiment to our city this year meant that the three original infantry battalions would be parading together on ANZAC Day  for the first time in 60 years.  Obviously that is quite an historic occasion, and the Prime Minister needed to be a part of it.

Just to close the post today, I'm adding a heart rendering version of one of our most well-known Aussie songs.  It's Eric Bogle's 'And The Band Played Waltzing Matilda', which I think is the very best version.  Interestingly the song is used in a presentation made for students at a Canadian high school.  While there are certainly some images of Australian soldiers and the Gallipoli campaign, there are many images of Canadian armed forces members.  This just proves that no matter where you are in the world, the evocative lyrics of Eric's song still resonate.  We honour our veterans, but all their sacrifices are futile if we never learn the lessons that war teaches us all.