On our property we certainly see quite a few of the unwanted guests like snakes: 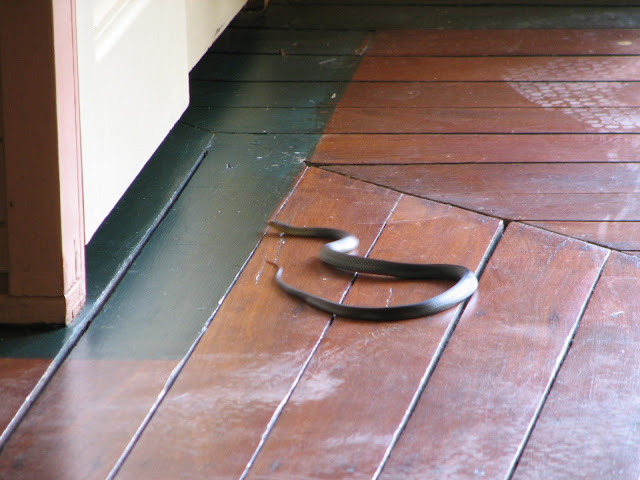 These horrid creatures pop up everywhere in the garden ... they're also quite at home on our verandah ... and occasionally inside our house!

But over the years we've been living out here in amongst the bushland, we've also had a number of unexpected guests ... and I'm referring to the wildlife variety, not those cousins that turned up from down south!!  Although ... they might just fit the category!  Anyway I digress ... I've managed to catch photos of some of the strange creatures that have wandered through our property and I thought I'd share them with you.

Now, keep in mind that we live on three acres surrounded on two sides by bushland ... and the only way into our property is down a long driveway wedged in between two other properties that sit closer to the street ... also remember that we live in a rural suburb far from the city itself.

One of the first unexpected visitors were the snails!  I had never in my life seen a real snail ... not as a child living in a small country town on the coastline nor as an adult living in our city's suburbs!  It wasn't until the first 'wet' season out here in the bush that I spotted snails! ... and they breed them big out here! 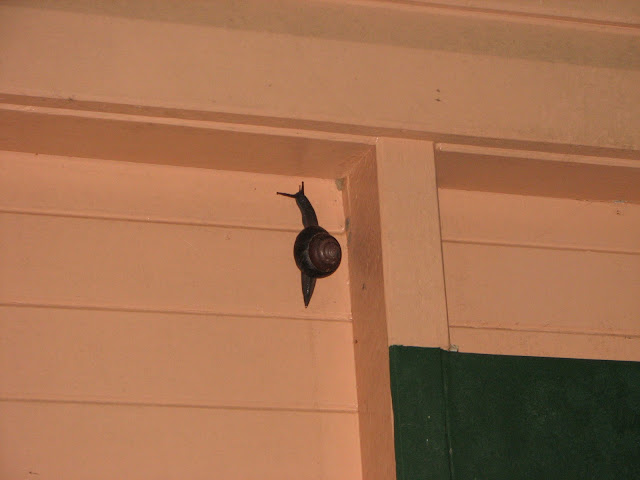 They have never caused any damage whatsoever in my garden ... so I'm quite happy for them to stay.  There was, however, one unexpected guest that I certainly did not want around! 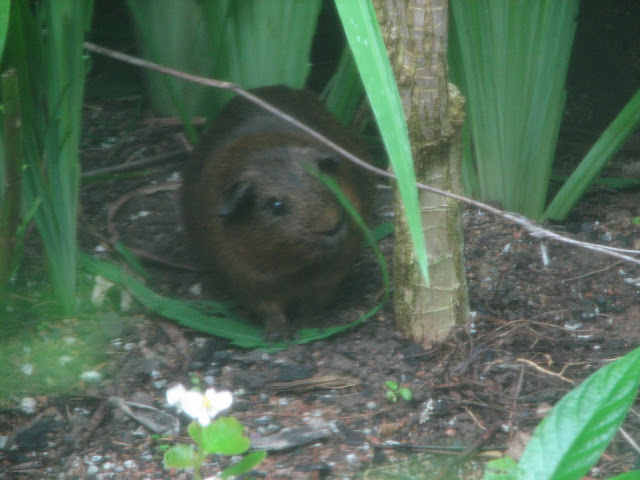 Cute and cuddly?  No folks ... this was the Guinea Pig from hell!  He munched his way through my Greenhouse Garden in a matter of days .... 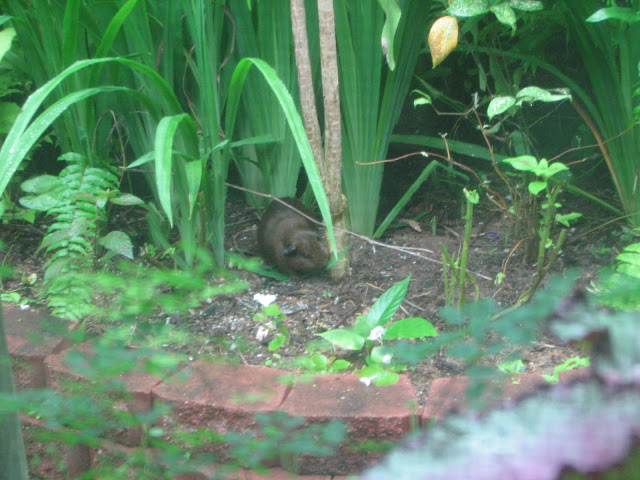 ... see that bare patch in front of the cute little creature munching away on my Happy Plant ... yes that was a patch of thick, lush vegetation before this marauding muncher got to work!  This creature decimated the entire area in a matter of days.  Of course, while he was busy gorging himself we attempted to find his owner.

We tramped the street ... and that is no mean feat.  Our street is bordered by large properties ... mostly around three or more acres large ... and it's a long tramp between neighbours.  Our neighbours also tend to have very large, mean and cranky dogs patrolling their fence lines ... and while you might stand at the front gate and yell ... because so many of the houses are actually set back from the road a considerable way, you can't always be heard.  So after our good-hearted but unsuccessful efforts at finding this horror's home, I'm afraid to say his demise was rather sad and undignified.

Another little horror ... and an unknown guest this time .... is this thing ... a centipede perhaps? 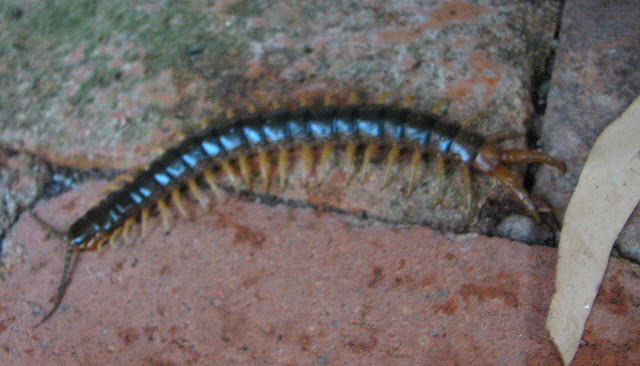 I came across it out in the courtyard.  It was huge with nasty claw feet and those wicked claw things at it's end!   I gave it a wide, wide berth.

Then there was this sight on our stairway when I got home from work one day. 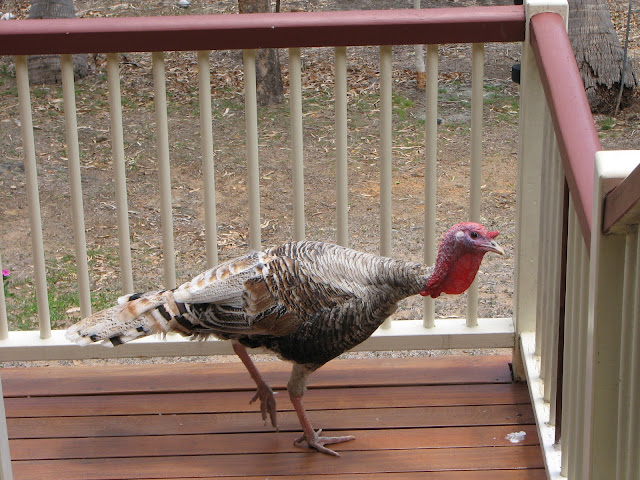 Now we have had chickens ... and ducks ... but absolutely no turkeys!!!  We had no idea where it came from ... and we had no chance of capturing it either as it was a speedy little demon!  We thought about doing a doorknock down our street ... but, as I've said before, it's a long walk between properties out here and the reception received from the neighbourhood dogs is not always that friendly!!!  Anyway eventually he wandered into our next door neighbour's yard and was looked after very well ... until Christmas!!!  No more needs to be said.

We often see paper wasps around our place ... their nests are a common sight ... 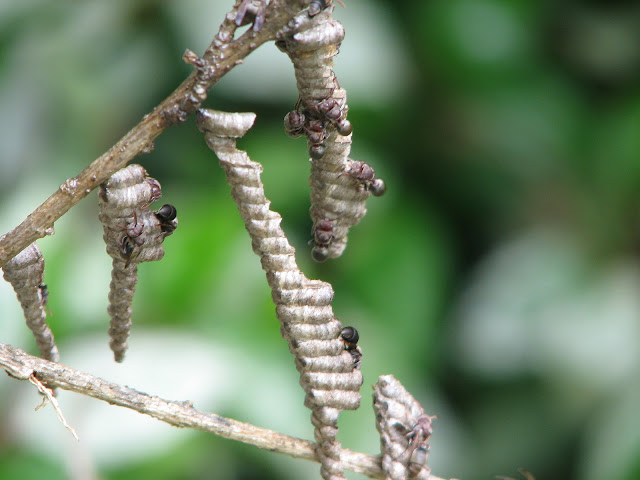 ... but this particular nest was something I had never seen before!  It reminded me of the sugary fairy floss on a stick that we used to get at the Show!  I never did find out what sort of winged creature had built it. 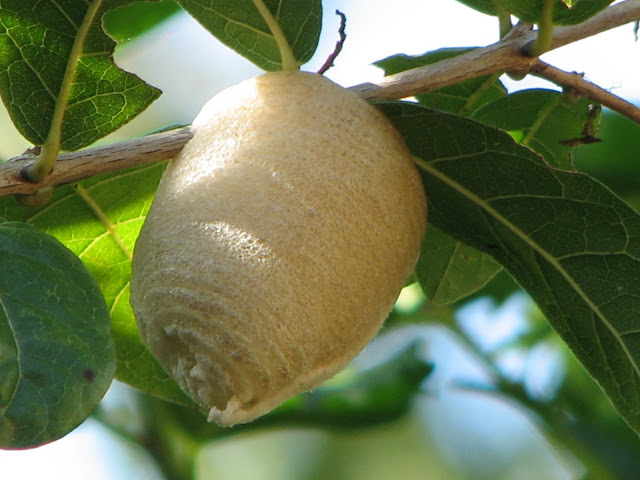 Now, finally, this was one of our strangest visitors.  Upon arrival home from work late one afternoon, I spied this creature on our back verandah.  I thought at the time it must be some sort of skink ... as it had lost it's tail.  Skinks drop their tail when they feel threatened ... and that's exactly what it seemed had happened to this amazing creature.

I hurried inside to get my camera and just got this shot before it took off into the cupboard and hid.  I never did get to see it come out from the cupboard ... and I've never seen it since.
at 7:42 AM