There is a family of Laughing Kookaburras that live in and around the little valley in the foothills here and they are regular visitors to my property. 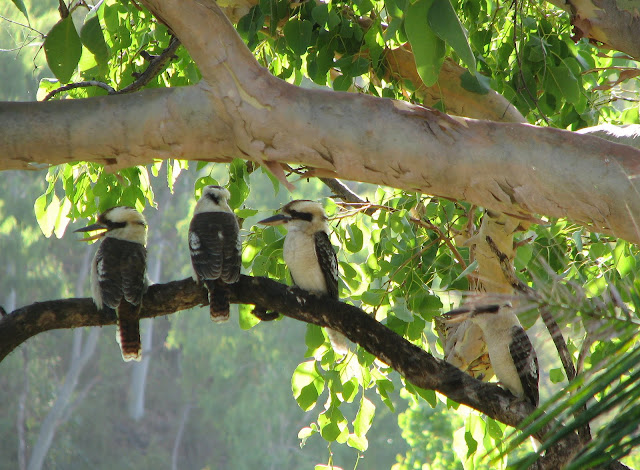 These birds are the largest of the kingfishers, but unlike other kingfishers, they inhabit the same territory all year round. 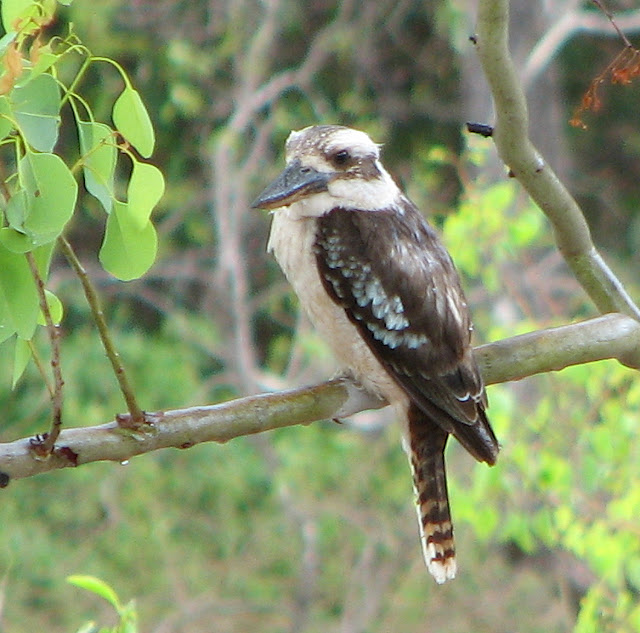 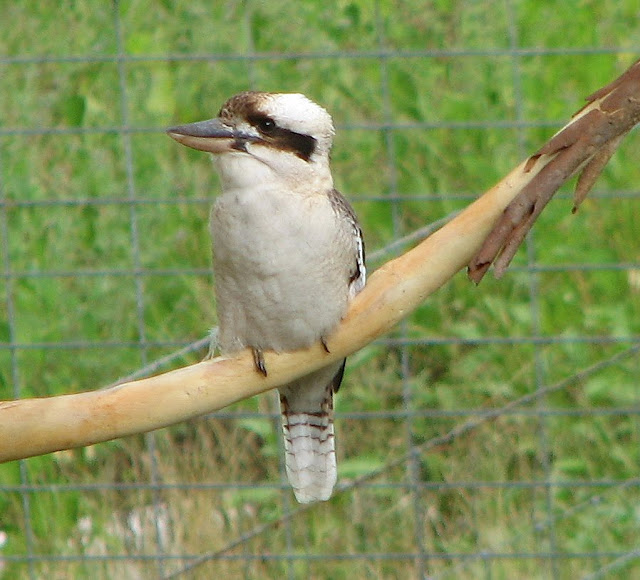 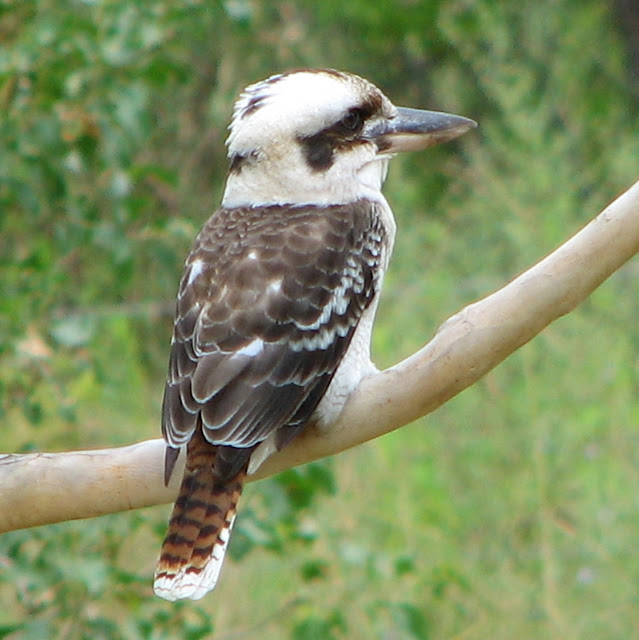 It has a huge bill that is black on the top and tan on the lower mandible ... very useful for handling the food it likes to eat! 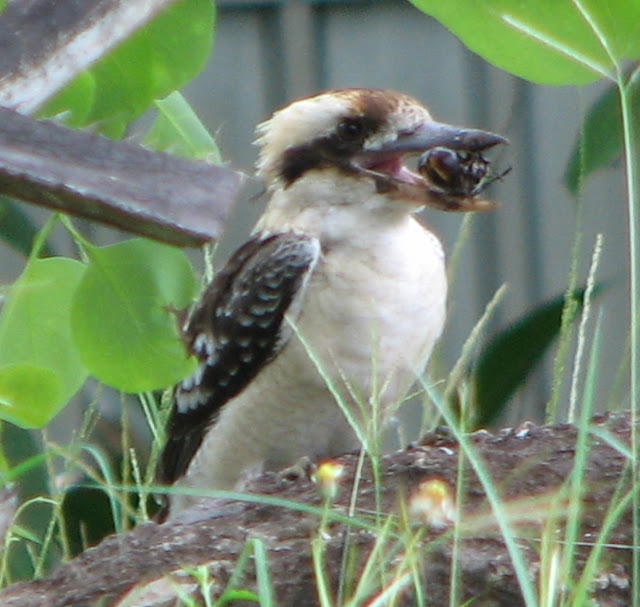 It feeds mostly on insects like the Elephant Beetle in the photo above, and also worms and crustaceans.  Although it also likes to dine on the occasional small snake, mammals, frogs and birds.

The method of hunting is a 'Perch and Pounce" approach.  The kookaburra will sit motionless on a vantage point ... like a tree branch or a railing! ... and stare fixedly at the ground below. 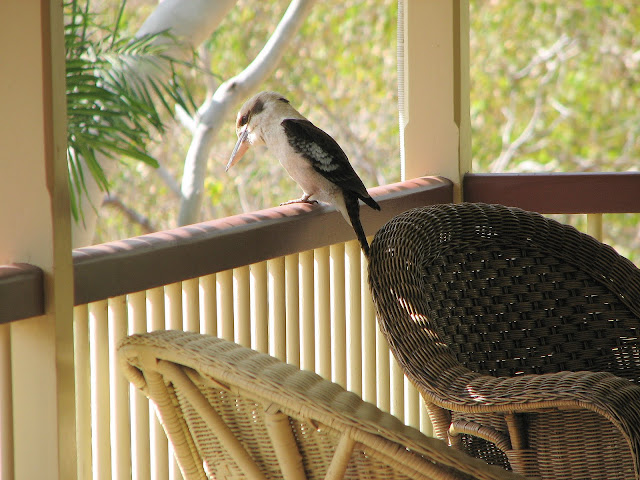 When it sights prey, it will flutter down on to it, seize it in the bill, and fly back to a perch to eat it.  Small prey is usually eaten whole, but larger prey is killed by bashing it against the ground or a tree branch.


That's exactly what this kookaburra was doing right before I got this shot ...  it was bashing the large Elephant Beetle against the rock to kill it.  I've also seen a kookaburra bashing a large snail against a rock in order to smash the shell first. These birds are called the 'Laughing Kookaburra' as they have a loud, raucous call that sounds very much like a laugh ... the "koo-koo-koo-ka-ka-ka" echoes up and down the valley beside my home every morning, most evenings and sometimes during the day as well.

Here's a little snippet of the Laughing Kookaburra's song.  Whilst the little fellow in the video didn't join in the chorus, he was surrounded by family members in fine voice.  (Try to ignore the Cicada song in the background.  There was a bit of competition going on!)

Over here they are sometimes referred to as "the Bushman's clock" because they call just before dawn every morning!  They are my alarm clock ... I don't really need the other sort at all! 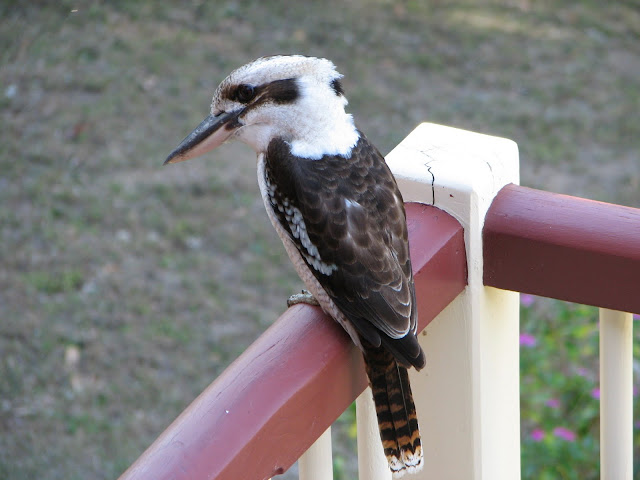 Of course, according to an Aboriginal legend, the kookaburra's famous chorus of laughter every morning is a signal for the sky people to light the great fire that illuminates and warms the earth by day.  It's actually more to do with marking territory ... but I love this story! 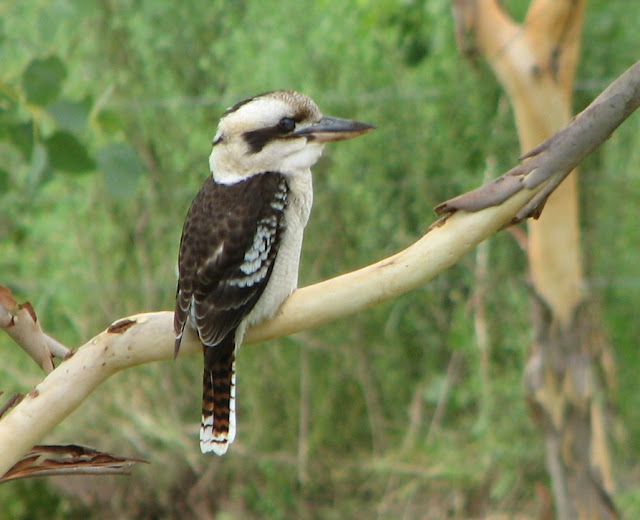